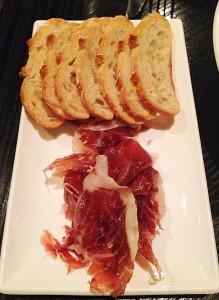 This restaurant is now closed.

The buzz on Fordham & Grand, a stylish eatery on the fringes of Singapore’s Chinatown is that the food is Australian/modern European. Australian chefs, arguably, led the culinary world in the fusion of Asian and European flavours, pioneered by the great Tetsuya Wakuda at his eponymous restaurant in Sydney.

Fordham & Grand is ‘destination’ dining. It’s on Craig Road, which is the continuation of Keong Saik Road, a hive of foodie activity featuring a lively mix of bars, restaurants and hawker food. It’s a block further away from bustling Chinatown and, when you walk down towards the restaurant, you could be forgiven for thinking you’d taken a wrong turn. The lights are dimmer, the neighbourhood quieter – well, as quiet as it gets in Singapore. Indeed, when you arrive at the restaurant’s heavy, unadorned wooden door, you need to search for the small steel plaque bearing its name.

Inside, the restaurant is equally moody. Dominated by dark panelling and judiciously-placed lighting, it has a speakeasy feel. Many patrons this particular evening are happy to congregate around the bar but Greedy Girl and gluttonous husband happily took up residence at a table for two along the opposite wall.

The restaurant opened earlier this year, run by a young team with an impressive hospitality pedigree. Some members had worked at Tetsuya’s in Sydney and at Waku Ghin in Marina Bay Sands. Others had cut their teeth at Singapore’s top-ranked restaurant internationally, Restaurant Andre.  The menu had an appealing mix of European delights.

Settling in, there was a slight hiccup. Ordering a Little Creatures pale ale, one of gluttonous husband’s favourite Australian craft beers, he was slightly perplexed to be presented with a bottle of cider. This, happily was soon rectified when it was explained the supply of Little Creatures had run out. Our friendly waitress suggested a Suntory Premium Malt’s (their apostrophe) pilsener from Japan. Greedy Girl chose the only champagne available by the glass, a non-vintage Henri Giraud ‘Esprit de Giraud’ Brut from Ay. It was a blend of pinot noir, chardonnay and pinot meunier and had a very rich flavour – it turned out to be very good with the food, but a bit full on as a pre-dinner drink.

To start we opted to share two dishes, an incredibly delicious Joselito ham (pictured above left) and Burratina with confit cherry tomatoes, basil pesto and rocket (pictured at the top of this blog). The ham was sensational, it had been cleverly combined with a tangy parmesan and served with croutons. It was salty, soft perfection and a good foil for the burratina cheese. This dish would have needed extra seasoning if not for being paired with the ham. It was a light and refreshing start; the tomatoes were full of flavour and the pesto was very well executed.

And so to mains, gluttonous husband went for the bouillabaisse. This was essentially prawns, red snapper and clams in a slightly thin bisque with a large dollop of aioli and a couple of thin slices of bread instead of the expected croutons. The flavour of the prawns was exceptional and all the seafood was well cooked. Gluttonous husband pronounced it perfectly edible and quite well balanced, if not a rave. 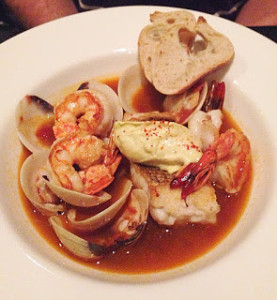 Greedy Girl went for the linguini with lobster. The pasta was tossed with oil, chilli, coriander and ginger – although the chilli was reasonably potent so neither of the latter two ingredients could be discerned. The lobster was cooked nicely and Greedy Girl enjoyed the way it went with the chilli sauce but gluttonous husband, when he tried the dish, felt the spice was too powerful. 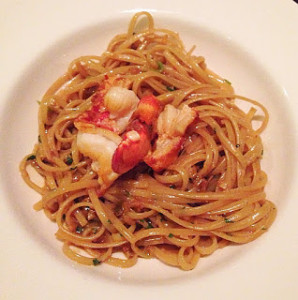 And therein lies the story of the restaurant’s approach to food – little touches that incorporate Asian staples into European dishes. While for average western palates the chilli was a little strong, undoubtedly local diners would regard it as a minimal amount of spice.

Full of bread and pasta, we opted to forgo dessert and headed back out into the steamy evening, passing long queues in the Chinatown food centres offering up steaming bowls of bullfrog porridge.

Fordham and Grand is an interesting interlude and its proximity to the main financial areas of Singapore no doubt enhances its appeal to expats and locals alike. There is a lot of competition in the area and one suspects it will need to ensure its food will need to do the talking to ensure it stays on the food radar.