Greedy Girl has had the pleasure of dining at Australia’s most lauded restaurant, Attica, several times.  The first visit was sublime, the second enjoyable, the third – well, there wasn’t anything outrageously new or different so she was very prepared to tick the establishment off her fine-dining list.

And then, a special evening for the Clean Plate Club got her back to the otherwise unremarkable suburban shopping strip and Attica’s dark and understated shop-front. It was a milestone birthday for Nuts About Town, who had long expressed a desire to try New Zealand-born chef Ben Shewry’s take on ‘foraging meets fine dining’. With FullAsAGoog, and gluttonous husband an honorary club member for the evening, we were required to be seated at 6pm, necessitating a mad dash from the office.

Feeling a bit like we were in for the early-bird special, we fully expected to be out the door by nine-ish to make way for a second sitting. Hah. Five hours later, we dragged our full and satisfied bellies out the door and wearily to the car.

Attica deserves every good word that’s been said/written about it. The evening was full of masterfully-executed and inventive food backed up by warm, personable and knowledgable service. In short, a feast for all the senses.

Shewry has re-invented his menu, with a host of new dishes. When he announced he was retiring one of his most famous dishes, a potato cooked in the earth it was grown, it actually made the news. Greedy Girl applauds him for a gutsy move – it’s akin to Melbourne’s famed Chinese eatery Flower Drum not offering Peking Duck. Happily though, one dish remains on the menu – the stunning white chocolate/caramel ‘Pukeko’s Egg’ pictured above.

But Greedy Girl is getting ahead of herself. There’s so much to tell. Having sorted out the table’s various dietary issues, we toasted Nuts About Town’s milestone with a lovely Blanc de Blancs champagne and settled in. First up, we had a selection of amuse bouches. The food at Attica is challenging – there are some weird and wonderful combinations that reflect the incredible palate and imagination of the chef. We started with a little dish of goats’ curd with hazelnut oil and fresh honey. The honeycomb, a sweet, sticky, chewy confection, comes from the restaurant’s own hives that are kept on the roof. The dish was a revelation, slightly salty, slightly sweet and the chewiness of the honeycomb gave it texture. Delightful. 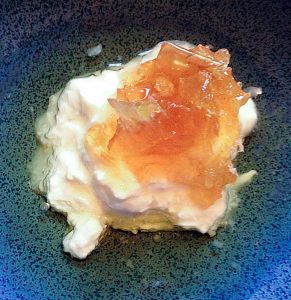 The next dish exemplified Shewry’s foraging prowess – mushroom leaves served with a corn puree with sour cream and Aspen. We were instructed to pick up a leaf and drag it through the corn puree. Greedy Girl didn’t get much of a taste of mushroom, nor did she particularly relish the texture of the leaves but it was interesting. 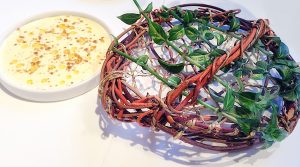 Next was something absolutely remarkable – wallaby pancakes. Nuts About Town, not a fan of eating our national symbol (she’d already ruled out the kangaroo that comes later in this feast) was given a small dish of glazed baby carrots, which she pronounced delightful, while the rest of us tucked into this pressed, soft disk of wallaby black pudding, topped with herb fronds and a plum jam. Absolutely delish. 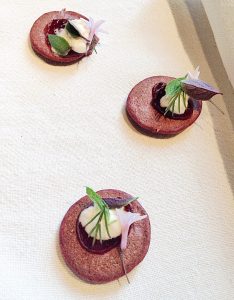 Next was a dramatic-looking plate. These are flash-fried mussels dusted in rye flour with sea succulents. The face on the plate is Attica’s mussel farmer, Lance. Greedy Girl isn’t the biggest fan of mussels but these were just exceptional. 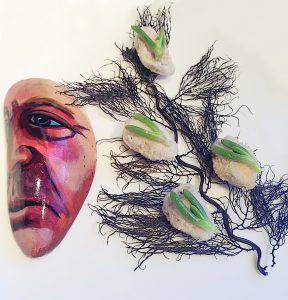 We were in raptures – and the first of eight more courses was just about to begin. We started with snow crab and sour leaves. Tearing open this little parcel of sorrel leaves revealed light, flaky snow crab from Western Australia, drizzled with a mandarin puree and a dressing of apple vinegar and grapeseed oil. Delish. 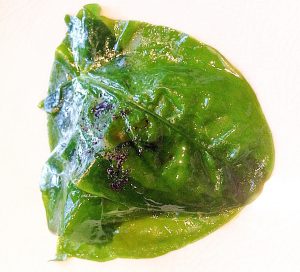 Next up was described, economically, as 10 flavours of St Joseph’s Wort. Not to be confused with St John’s Wort, this herb is apparently a member of the basil family. It liberally garnished a salad of Russian tomatoes, which had an intense flavour, atop some sheep’s milk yoghurt and a beetroot puree. Greedy Girl, who despises beetroot, was persuaded to try the dish and commented the tomatoes in particular were amazing. 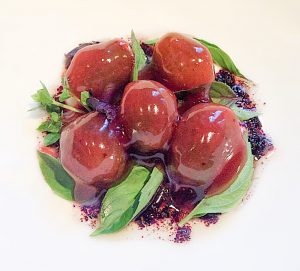 She was presented with a menu variation. This was an homage to leeks, resulting in a soft, fragrant and rich dish. Greedy Girl was well pleased and if every vegetarian concoction was as good as this, she’d almost be happy never to consume meat again. Almost. 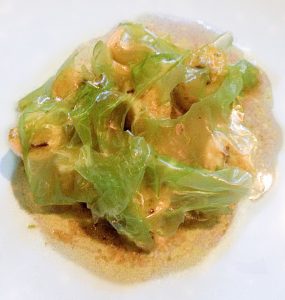 Seafood was back on the agenda again. Western Australian marron is a truly delightful thing. They’re small relative to a lobster or crayfish so there’s not an enormous amount of meat but it’s sweet, rich and delicious. This was plate-lickingly good. The marron tail sat on a pile of dehydrated kale and tarragon and topped with a luscious onion and pork fat sauce. The last of the bread was required to mop that up. 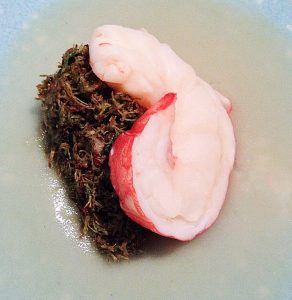 Another vegetable dish was next – cucumbers, holy flax and sauce of Burnet. Greedy Girl isn’t usually a fan of cooked cucumber but this was an utter delight. Fresh, still slightly crunchy it was studded with peas, holy flax (not a million miles away from rosemary) and the sauce – Burnet is another herb and several recipes Greedy Girl has seen incorporate veal stock and anchovy which doesn’t make the dish vegetarian friendly. It was, however, another plate-licker. 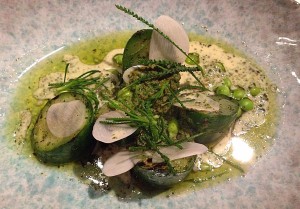 Unlike Melbourne’s Vue de Monde which has a fair amount of theatre about the presentation of dishes, Attica is a bit more low key. There are some quirky touches though, in evidence in the next dish, King George Whiting in paperbark. This is how it arrives at the table. 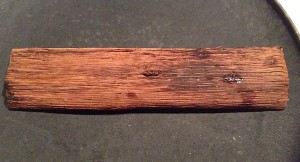 Opening the package (with an admonition not to try to eat the bark – some diners apparently need to be told!), the diner is presented with this. OMG. This is seriously good. Lashings of butter, flecks of herbs, including lemon myrtle and a topping of finely chopped oyster pearl meat. The bark was scraped clean. 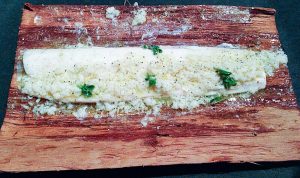 Next up was our national symbol, red kangaroo fillet with ‘herbs tended by the hands of our cooks’. The kangaroo fillet was superb. Soft, juicy, tender. Kangaroo is a great meat – exceedingly low in fat and good for what ails ya. The meat was topped with some slices of quandong, a native Australian fruit which were slightly tangy and served with a profusion of herbs. Shewry is known for picking herbs wherever he finds them and the restaurant has an enormous herb garden out back, but more on that later. The herbs themselves were a struggle to get through. Greedy Girl found them bitter and tough to chew and left most of them on the plate. 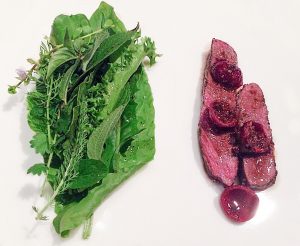 Nuts About Town, not enjoying the slightly stronger flavour of kangaroo, was presented with a delightful crusted chicken dish. This was accompanied by beetroot-soaked watermelon battens, a white sauce and edible flowers. She was well pleased with the combination. 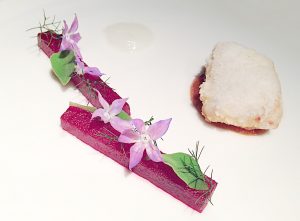 We were seriously starting to struggle by this stage. It was a welcome respite to be offered a tour of the herb garden at the back where we were also presented with our pre-dessert. The garden walls are lined with water tanks to keep the herb beds sprouting year round. Sipping on a glass of Turkish apple tea, we were shown the various varieties in season and then directed to a chef standing in front of a small preparation trolley while he expertly created mini berry ice cream cones topped with chocolate ganache and freeze-dried raspberries. Delish. 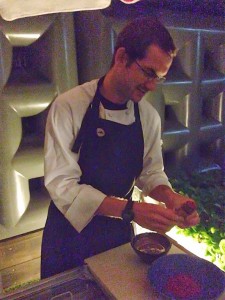 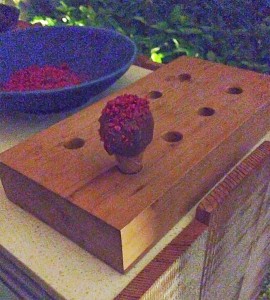 Back into the dining room, it was time for the first of the desserts – blueberries, vinegar and fresh cheese. This was virtually a deconstructed cheesecake, topped with chrysanthemum flowers. Greedy Girl not being a fan of cheesecake found this difficult to enjoy – and the apple vinegar taste was too strong for her. 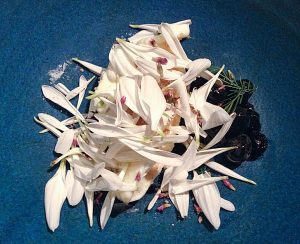 Next up was the raw strawberry jam. This was an assembly of meringue, sour cream and strawberries that looked attractive but was extremely sweet. It also didn’t have enough texture for Greedy Girl’s liking. Again, most of this plate went back to the kitchen. 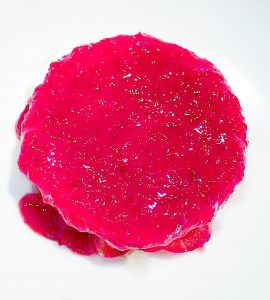 Finally, we asked for the bill, with the clock nearing 11pm – what an innings! The Pukeko’s Eggs (pictured at the top of this blog) named for a New Zealand bird that forages around its native North Island were presented in a little box and gobbled down greedily by all, not just your humble correspondent. It was a lovely finish.

Attica is a great experience. The staff are passionate and really seem to care that you have the best possible night out. The spacing of the meal was an utter triumph – rather than being rushed through the menu as though trying to set a new land speed record for dining, the leisurely pace was truly luxurious.
Get a table while you can. As a Melburnian, I’m proud to say it’s a meal worth a plane ride for.