On our first trip together to the US, finding great coffee was a bit of a struggle, even in New York City. Indeed, we walked “all over” the city to find a decent brew. But an area that wasn’t on our radar during that first visit was the East Village.

Basically, this is the area below 14th Street, all the way down to Houston. For the purposes of this blog, “Alphabet City” is included – the area encompassing Avenue A, B, C et cetera … East Village coffee has come a long way. We stayed on East 13th Street during our second visit but still needed to hike a fair way each morning to get our caffeine fix.

One of the most interesting aspects of this latest visit to NYC is that there’s a host of new local players. While the Australian coffee entrepreneurs still garner a lot of attention, they’re by no means leading the charge any longer. We visited an ‘Australian’ cafe in Nolita (north of Little Italy) and while the coffee, made by an Aussie barista, was good it wasn’t a patch on some of the others we experienced in the East Village and on the Lower East Side. Check out that coffee blog here.

This is by no means an exhaustive guide but covers off a fair cross-section of East Village Coffee. 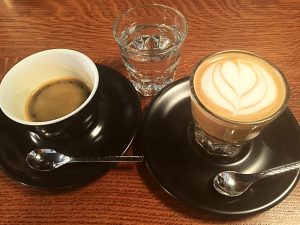 Serious about their roasts here

They don’t get much more serious about coffee than here. In one of the East Village’s hippest streets (the iconic Please Don’t Tell bar and Crif Dogs are just a few doors down), Box Kite treats coffee in a similar vein to wine. They source beans and roasts from all over the world. We opted for an espresso and a macchiato here made from Colombian beans that had been roasted in Stockholm. It certainly had plenty of oomph. We were happily seated at the bar, enjoying the music and chatting to the barista. He poured us extra sparkling water (on the house) and after we’d enquired about the provenance of the coffee, decided to make us a complimentary espresso from the same beans, but these were roasted in Portland, Oregon. Greedy Girl much preferred it. Had a bit more oomph. A coffee like that every day could turn Greedy Girl on to drinking espresso more regularly. Apparently at night, the space gets taken over by chefs who do a tasting menu. One definitely to try next trip.

115 St Mark’s Place (between 1st and Avenue A – another outlet on West 72nd Street)
boxkitenyc.com 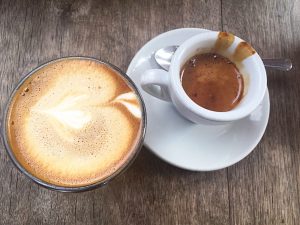 This isn’t much bigger than a hole-in-the-wall cafe. Earlyish on a Saturday morning we found ‘a crowd’ – about five people. In this space, it’s definitely standing room only. There’s a high timber bench out front, plus a very small one just for two people. We were lucky enough to snaffle that and ordered the cheapest cortado and espresso we’ve had in the city. It was pretty fine too; real ‘wake-me-up’ stuff. Indeed, one punter in the line was obviously frustrated with the lack of strong coffee in NYC – he asked for a ‘quadruple’ strength cappuccino. The barista eyed him warily and said: ‘trust me, you don’t want that’. He was right. This is robust but still round and smooth and repeated sips go down exceptionally well. Note that the cafe is closed on Mondays. 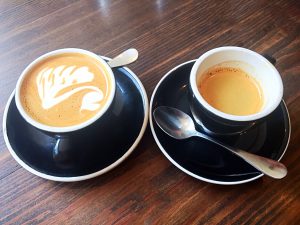 There’s only one problem when one goes on a coffee crawl; if we’d had this brew before Abraço, we would have been well pleased but in comparison to the extraordinary oomph from our first coffee of the day, this one felt a little sub-par. Having said all that, it was a perfectly drinkable macchiato and espresso. There’s plenty of seating inside and, on a hot NYC weekend (or, indeed, in any temperature extremes) it was a comfortable enough space. 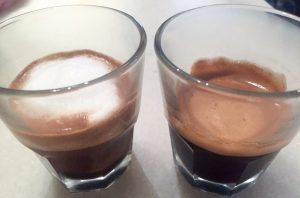 This long, thin cafe has a wooden bench out front for those who want to sit alfresco and Greedy Girl initially thought it was going to be a similar space to Abraço. Pushing past the counter/food prep/coffee machine area, there’s a handful of tables, most of them occupied by people staring intently into their laptops (the wi-fi details are affixed to a mirror in this little space). We ordered an espresso and a macchiato. Greedy Girl needed to again ask for more milk. One sip of the macchiato and it was like getting whacked over the noggin’. Apparently the cafe uses Brooklyn’s Kitten Coffee Roaster beans. There’s an all-day menu but food only gets served until 4pm. If you fancy starting with items from the lunch menu at breakfast (or vice versa) it’s all good from their perspective.

178 East 7th Street (between Avenue A and B)
candbnyc.com

On our last visit to the city, this was known as Bluebird Coffee Shop and became our regular haunt for a round and satisfying cortado and espresso. Indeed, it was there we learned that ‘cortado’ was the most common descriptor for what Australians would recognise as a piccolo latte. It’s a robust coffee (see the picture at the top of this post) but quite expensive for the area. If you’re looking for a caffeine fix just before you head for the Subway to go uptown (it’s just near 2nd Avenue station), you could do a lot worse but it has plenty of competition in this area now. 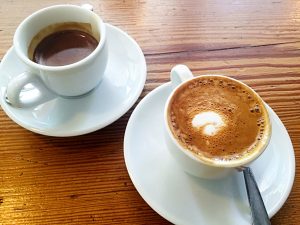 No frills but drinkable

This is nominally Alphabet City (rather than the East Village per se) but we sought it out, having been to one of its other outlets on our first visit to NYC a few years earlier when it was one of the coffee pioneers, established in 2001. There is a very brief coffee menu here – no nonsense. Brewed coffee, iced coffee, espresso and espresso with milk – in a nutshell. We took the latter two. It was quite decent although had none of the wow taste of other coffees in the area.

700 East 9th Street (between Avenue C and D, plus other locations)
ninthstreetespresso.com