Neighbourhoods change very quickly in NYC. Our walk uptown from the hipster feel of the Lower East Side takes us through the East Village, a noted hotspot for restaurants and bars even if it is still a bit grungy. A few streets further west, there’s a much more refined area – NoHo.

It has some exceptionally swish apartment blocks, boutiques and an upmarket vibe. Then, in the middle, there’s Acme. The executive chef at this hot NoHo establishment is Brian Loiacono, formerly of Daniel Boulud’s db Bistro Moderne. Here, he showcases his training in classical French cookery with an American twist – with a shout-out to his Italian heritage. We found out about Acme through Eleven Madison Park alumnus Rob, who said it was fun spot to eat – and also an opportunity for him to catch up with the restaurant’s wine director Nicole, also an old EMP colleague.

Even with the sun shining brightly outside, Acme is a dark and moody place – not conducive for Greedy Girl to get good photographs of the dishes. The decor is far from minimalist; it has a feeling of a French bistro, albeit a very glamorous one – a bit over the top. Shown to a table down the back of the dining room, we settled in on the banquette and were welcomed with some glasses of a very fine rose champagne. Greedy Girl generally doesn’t go for a sparkling rose but she’s definitely warming to them.

We met Rob at EMP on our first visit to NYC five years ago and stayed in touch, visiting him at the restaurant he was running in his native London a few years later. After bemoaning not finding anything outrageously exciting and new there during our last visit (when he was back in NYC) he proceeded to tell us his adopted city was chock-full of new and exciting places to eat.

But we had a feast to work our way through here first. They clearly know how to write a good menu at Acme – there are a lot of tantalising dishes. Munching on a complimentary dish of crudités, we needed to break off conversation long enough to peruse the offerings. Once we’d decided on the food, Rob and Nicole consulted on the wine and came up with a very good Italian red. Sorted.

Rob chose one of his go-to starters, the Carolina shrimp, served with egg yolk, pickled turnip and celeriac chips sprinkled over the top. Gluttonous husband opted for one of the house specialties, a blood sausage and strawberry dish, while Greedy Girl took a special – soft-shell crab. Apologies for not providing too many images in this post. Greedy Girl considers herself lucky to have come out with anything useable.

Apart from the blood sausage dish (pictured below), the presentation of the dishes was on the plain side (so they wouldn’t have made particularly attractive pictures at any rate, but the flavours were excellent. The strawberries on the dish with the blood sausage were marinated in balsamic vinegar and the combination worked a treat – the fruit and vinegar acids cut through the richness of the sausage. The little tendrils you can see in the picture are sunflower shoots. 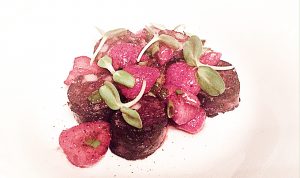 We only ordered starters and main courses but the restaurant kindly brought us a couple of pasta dishes to share – lobster fagottini, with Calabrian chili and Bottarga (salted fish roe) and a rigatoni with mushroom, Parmesan and black garlic. The pasta on both dishes was cooked perfectly but the lobster dish packed a punch of spice. The sauce with rigatoni was beautifully balanced.

Mains were up next; gluttonous husband took the cod ‘en papillote’ served with julienne vegetables and vadouvan – a French take on an Indian spice mix. It gives a lovely colour but isn’t particularly strong or hot. Rob took the Colorado lamb, which sat atop a layer of English peas, piquillo peppers and smoked pine nuts, while Greedy Girl went for the skirt steak, which was combined with portobello mushrooms, spring onions and green peppercorns. Again, the dishes were balanced; Greedy Girl’s steak was cooked to her liking and the heat from the peppercorns was subtle. We paired our mains with two sides – a goat cheese polenta and some herby fries. 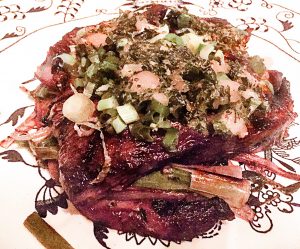 And so to dessert – both the boys took an affogato – essentially ice cream and a shot of espresso. In Australia we’re used to nominating which hit of booze also gets poured over the ice cream, usually something like Frangelico or Amoretto. Here, however (and elsewhere in NYC where we’ve tried the dessert) it’s booze-free. Gluttonous husband, while enjoying his rare feed of ice cream, was a little disappointed.

Greedy Girl took the chocolate cake topped with a whisky cream (pictured at the top of this post). While the piping of the cream was superb, she’d have much preferred it to be on the side but gluttonous husband was happy to take forkfuls of the cream away for her. It was a very moist and rich cake.

And we were done; no need for coffee – the boys had already had that as part of their dessert and we said our farewells and headed into the warm night. It was relatively early but the restaurant was jumping – obviously a popular spot. All told, the food was very good and where the food lent itself to being artfully displayed, the plating was lovely. There’s an extensive wine and cocktail list and great advice from the wine director, Nicole.

If you’re of a mind to have a quiet dinner, this is definitely not the spot for you; the noise level is high, the energy palpable. Conversation is still possible but perhaps head there earlier in the evening before the party atmosphere hits a peak.