In a cold Melbourne winter, it takes a lot to get Greedy Girl out of the apartment at night. Gluttonous husband’s prowess in the kitchen means yummy and cosy dinners at home.

But when an offer for coupon dining came into Greedy Girl’s inbox for the restaurant at the Hilton Hotel South Wharf, she decided a good deal was a good deal – especially given we only had to walk across the road to get there.

Dock 37 has had a few iterations since the Hilton was built in 2009. The restaurant started out as a fine dining established called Nuevo 37, with a Michelin-starred chef overseeing the food. It them moved into tapas, then to more of a bar and now it’s a pretty standard hotel eatery. We’d eaten there during the fine dining and tapas phases and had pretty reasonable food, so the idea of two courses plus a glass of wine each for A$79 seemed like a decent offer.

The decor hasn’t changed over the years. While the design is supposed to evoke the old warehouses that used to occupy the area when it was a working port for the city Melbourne, inside it feels a little like inside a ski chalet with vast expanses of timber. The only thing missing on a cold night was an open fire but the interior still felt very warm.

The theme here is ‘where sea meets land’ – how that’s different from any other run-of-the-mill restaurant escapes Greedy Girl, however … Some of the dishes weren’t available as part of the deal – no oysters and the higher-quality steaks. Still, there was a reasonable amount of choice and we ordered two starters and two mains.

There was rather less choice with the wine – the house red or white. We both took the Shiraz – it was a little rough around the edges, but OK.

It was presented nicely enough but it has to be said there wasn’t any great hit of flavour.  Too much celeriac was dominant but again it didn’t really taste of anything. The caper berries were similarly bland and there was no hit of heat from either the radish slices or the chilli dressing. The meat itself was perfectly OK.

Gluttonous husband took the hot-smoked “rustic salmon”. This was served with fennel, Persian feta, saffron aioli, roast beetroot and a lemon myrtle-infused olive oil. Apart from the plate looking a bit messy around the edges, it wasn’t entirely unattractive but again didn’t deliver on flavour. The salmon was OK but the fennel didn’t come through. There appeared to be one dot of feta and if the olive oil was infused with lemon myrtle we certainly couldn’t taste it. 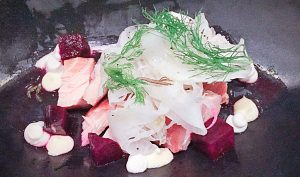 It was time for main courses – with a slight hiccup. We saw the dishes arrive and then be served to another table. This was a big no-no for gluttonous husband who didn’t want to accept the plates when they’d been retrieved and brought to us. Given what was to follow with his dish, perhaps it should have been started again. As an apology for the mix-up, extra glasses of wine were brought.

Gluttonous husband chose the wild clover lamb, consisting of four points of Tasmanian rack of lamb with a dauphinoise potato, rosemary garlic essence and a house-made dukkah spice. He was asked how he’d like the lamb cooked and said “medium rare”. Unlike beef, which he prefers to eat still mooing, lamb needs to be a bit more cooked.

However, when it arrived at the table the meat was almost raw. He ate around the edges but the middle was a no-go zone. The dukkah crumbs and jus were unremarkable. The potato was inedible – very sloppy inside with a flavour gluttonous husband couldn’t identify. It was a very odd plate of food. 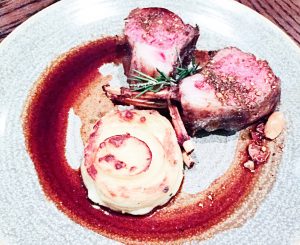 Greedy Girl took the catch of the day, a baby barramundi. She forgot to enquire as to whether the fish would be served as a fillet and was somewhat unnerved when presented with the whole fish. 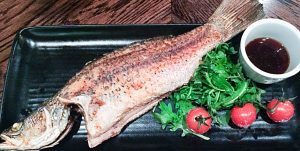 Gluttonous husband pointed out the error of her ways – he fully expected to see the fish eye glaring out from the plate. Being the gentleman that he is, of course he did what he could to fillet the fish for Greedy Girl. It had a good flavour and was quite moist. Greedy Girl enjoyed the soy and wasabi sauce on the side, but gluttonous husband felt it overwhelmed the fish. The handful of rocket leaves and cherry tomatoes were also quite decent to eat.

We were also entitled to a side and chose a bowl of thick cut chips which were cooked quite well.

Not having had an enormous amount to eat, we decided to see if dessert was better, choosing a chocolate fondant with berry meringues, banana “dust” and a black currant sorbet. It was quite a pretty plate. 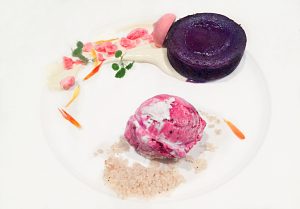 The berry elements were nice. The ice-cream was something gluttonous husband particularly enjoyed. The star of the show – the fondant – was still runny in the middle but had a bit of a raw flour taste to it. The banana dust didn’t really taste of anything.

And we were done.

The restaurant was quite busy for a winter’s night and no doubt gets its fair share of patronage from hotel guests. While there are plenty of restaurants around on the South Wharf promenade, this is probably the only spot in the vicinity that does standard European-inspired food so there’s perhaps no real competition if you don’t want tapas, a beer hall or Asian food.

Coupon dining is always a risk for a restaurant. Greedy Girl’s rule of thumb is asking the question: “Would I pay full price for this?”. Here, the answer would – sadly – be no.