The western end of the city of Melbourne has been a fairly lacklustre destination for foodies. While there’s an enormous amount of development in the Docklands precinct, just a block further west, Spencer Street has been noted pretty much only for its railway station, fairly unremarkable-looking apartment developments and the Skybus to Melbourne Airport.

It’s surprising given the area has some very interesting buildings, courtesy of the former power station that dominated the stretch of Spencer Street between Bourke and Lonsdale. Visitors should note that Melbourne is laid out in a grid so it’s very easy to navigate. Not as easy as counting the streets and avenues in New York City perhaps but a block is literally a block.

Higher Ground has started the foodie revolution in this part of town. The brainchild of some serial cafe entrepreneurs who made use of one of the power station buildings which boasts huge ceiling heights. The fit-out plays to the industrial heritage of the venue and, on a Friday night, it’s dark, moody and very crowded – luckily they take bookings for dinner.

It was time for a catch up with the Persian Foodie, whose office is just a few streets away. The interior is an interesting layout, with a number of different spaces and levels. There’s a mix of small-ish tables and larger communal spots, including a lounge area upstairs. For dinner, there’s the opportunity to request a private table during the online booking process but that’s not assured.

We did manage to get a table for two next to one of the large, arched windows overlooking the street and settled in with a glass of rose (for Greedy Girl) and a gin and tonic. The interior lighting at night is exceptionally muted, with our table lit mainly by the street lamps, so apologies for the quality of the images in this post.

Higher Ground is essentially a cafe with dinner only available Thursday-Saturday. Apparently it does a roaring trade for breakfast, brunch and lunch all week; queues have been known to form. We’d been told on booking our standard lease on the table was two hours. No problem, although there are precious few other good venues around if you have the desire to ‘kick on’. We were fortunate enough that, after the initial post-work rush, there was no pressure on us to depart, so we could enjoy a leisurely stay.

The Persian Foodie rarely eats red meat, so our dinner here was overwhelmingly vegetarian. The plates are pretty much designed to share, so we ordered a few of the small dishes, a large and a side. First to arrive was the dish at the top of this post, the cured kingfish with seaweed, ponzu and sesame.

Ponzu is a Japanese citrus-based sauce and Greedy Girl contends there could have been more of this on the plate. Still, the quality of the fish was very good and it was a generous serving. Not a bad dish at all to share.

Next we had an extraordinary almond hummus with seed crackers, roasted chilli and spices. The seed crackers were exceptionally yummy and went well with the hummus which had a sweetness about it. The hint of warmth from the chilli built in the mouth. A yummy take on hummus. 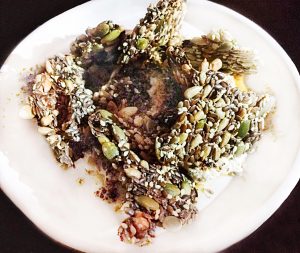 Next, we took baby corn which came still in its protective sheath (and silk). This had just been roasted and finished with butter and a chilli salt. It was tasty, but the silk was painful to get rid of, sticking to our hands. It was near impossible for Greedy Girl (she whose sight is somewhat challenged, particularly at night) to see the stuff. 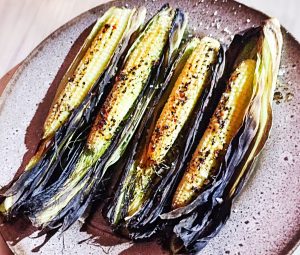 Next, we had our ‘main dish’. This was roasted and pickled seasonal mushrooms with soft polenta, grana padano cheese and a hazelnut crumb. We took this with a side of heirloom carrots, served roasted, pickled and raw, a carrot top pesto and mustard leaf.

Apparently the mushroom and polenta dish is available all day and much in demand for brunch. Greedy Girl understands why, especially in cooler weather. It’s hearty, satisfying and a great combination of flavours. The carrots she found less successful, although the Persian Foodie enjoyed them. Some of the raw elements were just too hard for Greedy Girl and she left them on the side of her plate. 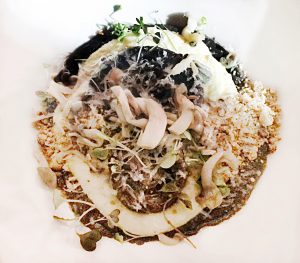 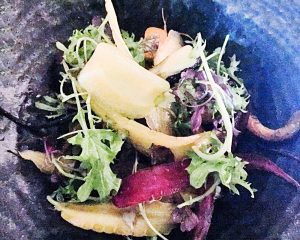 By this stage, an old friend of the Persian Foodie (visiting from Hong Kong) had arrived and they decided to head into the night for coffee and a chat. Greedy Girl was surprised that the restaurant wasn’t still packed but it is very early days.

Higher Ground is wonderfully atmospheric at night. Greedy Girl would like to see it in the cold light of day to get a feel for the vibe them and also to fully appreciate the building. It’s a great addition to the local scene and hopefully just the beginning of more exciting options in the area.