Sydney Hotels are noted for a few things – they’re not particularly inexpensive and it can be hard to find a quiet room in this incredibly busy city.

As Australia’s biggest city, you’re spoilt for choices on where to stay. Naturally, rooms overlooking the famed Sydney Harbour come at a premium but there are some amazing hotel rooms that would appeal to bucket list travellers prepared to invest in those.

For the business traveller, it’s a matter of finding somewhere central to work, within a desired budget, that offers a reasonable level of amenity. It has to be said, room prices for Sydney Hotels vary hugely. What’s a bargain on one trip is horrendously expensive the next. Ah well, that’s supply and demand for you.

A recent business trip showed the quirky QT Hotel in Market Street was an attractive price, coming in at around A$300 a night. We’d dined at the sister hotel in Melbourne (read the review of Pascale here) and noted its hip vibe and over-the-top decor.

Part of the QT Hotels Group (which also has a property on the Gold Coast), the Sydney hotel opened in 2012. Its 200 guest rooms are in a refurbished space between the State Theatre and the Gowings department store. The buildings are art deco (the theatre) and baroque style (Gowings). Young, hip door attendants lurk at the front door on Market Street and direct you to the elevators – the reception is on the first floor.

And then it hits you – literally. A music and light show in the lifts is completely full-on. It’s a shock to the system but even more so the next morning when you’re either heading to breakfast or out to work. But we’re getting ahead of ourselves.

Along with quirky, the other major adjective here is moody – the reception, despite a number of windows overlooking Market Street, is kept in a perma-gloom. The area features a number of mismatched sofas and chairs, giving a highly stylised look.

While check-in is nominally done via an email form, where a quiet room with low pillows was requested, there’s still the need to line up and hand over the credit card for any extras. That email also offered a chance to upgrade to the next level (for an additional fee) which was declined, but the room was upgraded upon check-in anyway.

The room, on the 6th floor overlooked Market Street – that was slight cause for concern given the priority was for a quiet space. The double glazing seemed to work well, however, so all good.

It’s an impressive looking space, dominated by a huge king-sized bed. Apart from the natural light, the other accents in the room are golden – a glass display case separates the bedroom from the bathroom and the lights over the mini bar and concealed fridge. 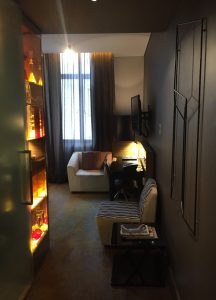 A dramatically-lit display case separates the bedroom from the bathroom 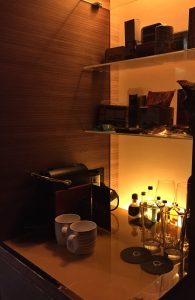 There are also sliding glass walls separating the bed area from the double vanities. 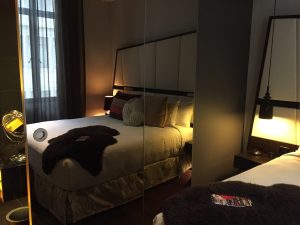 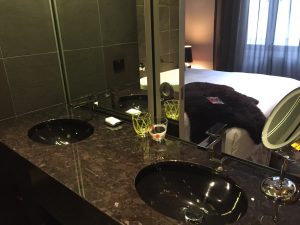 The double vanities on the other side

The bathroom has Malin and Goetz amenities and a magnifying shaving mirror, along with a free-standing bath, a walk in rain shower and plenty of towels. The toilet is tucked around the other side of the vanities. All told, quite a well-organised bathroom. 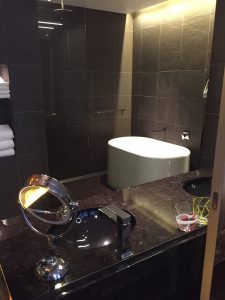 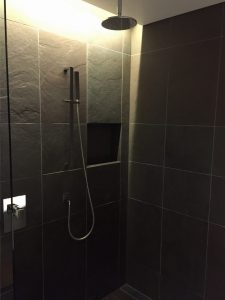 Facing the bed, there’s a small desk and a flat-screen TV. At the foot of the bed, there’s also a small table made from what looks like a piece of tree. It’s extremely heavy and, in the middle of a dark night, would be a tripping hazard if you’re navigating from the far side of the bed. It was certainly too heavy for me to budge. 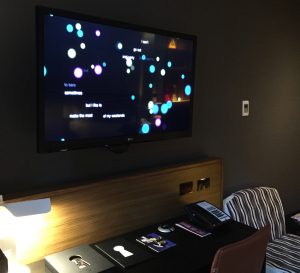 It’s all very groovy-looking but the true test of a hotel room is the sleep quality. And that’s a slight issue with the location of this room. There are major works occuring in nearby George Street and the noise from those in the early hours of the morning wasn’t welcome.

Also, having requested ‘flat’ pillows, these were still quite high and the bed linen felt somewhat scratchy. The bed itself was quite comfortable and the air-conditioning in the room worked effectively.

The next morning, the bathroom functionality was put to the test. The shower didn’t require a degree from MIT to learn how to operate it, which was a huge bonus, but the room filled with steam very quickly, meaning the mirrored sliding walls at the back of the vanities were rendered virtually useless for make-up. It was also far too dark.

The towels were also quite thin but it seemed very odd that a building refurbished so recently wouldn’t implement steam extraction in the bathroom. Wiping off the mirrors with a hand towel wasn’t particularly effective.

And so to check-out. The blasting music in the lifts (no ‘muzak’ here) was a real eye-opener – and not a particularly welcome one. Despite check-in being via email there was no electronic option on departure and if there was an express check-out I didn’t see it. Check-out was slow and the area under-resourced. Having one of the ‘in crowd’ around the front door to assist with bags at reception would have been a better use of the resource.

Having had a drink at the Gowings Bar (accessed via internal stairs from reception) the night before and charged it to the room account, I was told the receipt would be emailed to me. I’m still waiting.

This hotel has a number of pluses. It’s in a good position in the centre of the city and it looks very luxurious and impressive, but style doesn’t conquer all. Comfort and amenity remain king. Perhaps actually getting a ‘quiet room’ next time, or a time when the works in George Street have concluded would ensure a better night’s sleep.