It’s perhaps an act of optimism going out for a meal on mother’s day when you’re a twosome. Such was the reality when we looked for a Champagne Sunday brunch in Beijing – our only Sunday in the Chinese capital was the celebration of all things maternal.

Brunch commenced at 11am and an option was to choose a free flow of Mumm champagne for RMB570 (about A$110 at the time) – certainly one of the cheaper champagne brunches we’ve experienced and unusual given the hotel itself was rather expensive.

We were shown to one of the rare tables for two in, happily, what appeared to be a relatively quiet corner. And, to be fair, the kids seemed to be relatively in control, many of them preferring the finger painting stations at the entrance to the bistro – a good move by the hotel.

But yes, it was a very quiet corner. Greedy Girl is happy to concede that not every staff member working in a major hotel in China should speak English, but the senior people on the floor did have quite good language skills. It’s just that the wait staff tended to avoid us, absolutely nothing was explained and the champagne service was rather haphazard.

Like most Sunday brunches in Asian hotels, there are various stations to select dishes – seafood, Japanese, western options, Chinese dishes – so what’s to explain? If you wanted a dish from one of the ‘live’ cooking stations, you needed to take a chit from a small bowl on your table and present to the chef. The dish would then be brought by wait staff when it’s ready. Only after we’d seen locals doing this did we cotton on.

Another issue was actually getting something to drink. Because the serving staff didn’t want to get anywhere near us, gluttonous husband investigated. Spying a local helping himself to the champagne at a station, gluttonous husband immediately poured us two glasses and brought it back to the table. While Mumm is a nice drop, the champagne wasn’t cold enough. Sigh. The temperature improved during the brunch, but the bottles obviously weren’t brought from a fridge to begin with.

But we pressed on, trawling through the various stations looking for delights. Greedy Girl started with some of her favourite sushi. This was absolutely awesome. Fresh, flavourful, great texture. Greedy Girl could have just continued to fill her plate for the rest of proceedings. Yum. 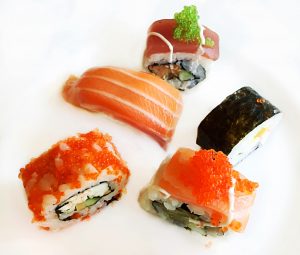 Gluttonous husband decided he’d opt for the fresh oysters, which were shucked to order. We discovered another wrinkle in the system. While most plates you present a ‘chit’ for were delivered to the table, the oysters weren’t – gluttonous husband waited for a bit and then went to seek them out.

Still, they were pretty good – small, salty and tasty. We were curious as to where the oysters were from and received a most unexpected answer – Denmark. 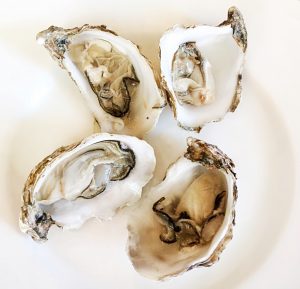 Having already experienced a fairly lacklustre ‘Peking’ duck earlier in our visit, Greedy Girl spied the glistening roast duck station (pictured at the top of this post). She made a beeline for the chef, who seemed to be waiting for customers. He prepared two pancakes for her, complete with hoisin sauce, cucumber and the shredded white part of spring onions. 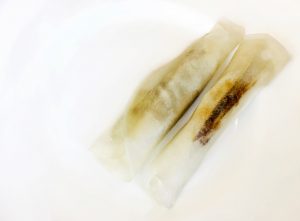 This was much tastier than the local duck specialist restaurant we’d tried earlier in the week, but still not a patch on Melbourne’s famed Flower Drum in Greedy Girl’s humble opinion.

We decided to try some seafood. At the start of proceedings, there was a huge array of fresh crab, prawns and langoustines. Less than 30 minutes into service and this station had already been decimated. Greedy Girl helped herself to a crab and langoustine. The crab was tiny and too hard to get any meat from and the langoustine had already been, ahem, picked clean. Greedy Girl would expect the meat had just fallen out of the shell. She tried again … and here it is: 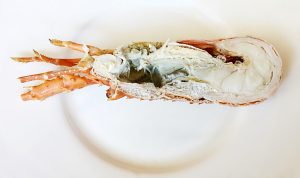 This was possibly the driest piece of seafood Greedy Girl’s ever experienced. It didn’t look great, being slightly grey in colour, was near impossible to lever the meat from the tail and awful in the mouth.

But, as fate would have it, one of the few wait staff who would engage with us rolled by our table with a special of the day – half a lobster and a small piece of abalone. 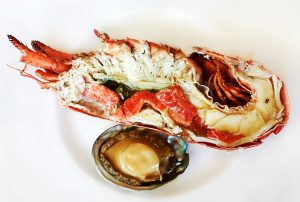 Again, the lobster had been overcooked and was a bit tough but the abalone was actually quite good. A bonus.

And so our brunch unfolded. Greedy Girl helped herself to some more sushi and decided to try some ruby-red tuna. This was sliced to order – the problem was getting the chef’s attention, given he seemed to be more interested in attending to his smartphone. That’s something Greedy Girl has never seen before and hopes never to see again – a chef, in the middle of service, standing at his station on his personal phone. 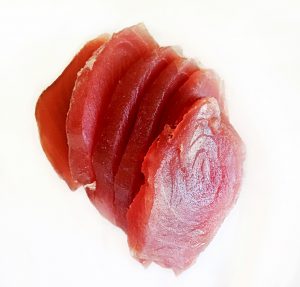 Whether he cared about Greedy Girl’s unimpressed gaze or not, he certainly put a decent portion of tuna on the plate. As far as taste? It was OK but didn’t have any great depth.

We decided to try tuna in a different form, opting for the tataki. Gluttonous husband thought this was coated in black sesame seeds, a dish he’s done at home many times, but it was actually black pepper – and strong black pepper. We obviously weren’t going to have much tuna joy this time around. 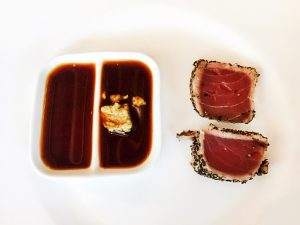 Gluttonous husband had spied a foie gras station. He decided to put in a chit for two servings. 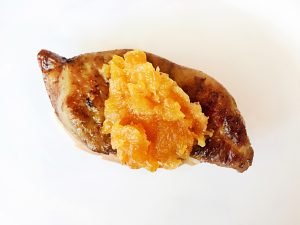 This wasn’t actually seared to order – the chef had two plates ‘ready to go’ which was a little underwhelming because the foie gras wasn’t entirely hot. It was topped by an apricot ‘jam’ that didn’t have much flavour. The foie gras itself though was quite beautiful. We made a note to go back and get another serving but even though there was more than an hour to go until the advertised conclusion of the brunch, no foie gras remained.

Gluttonous husband decided to try the grill station, asking for a steak with pepper sauce. Normally he orders his meat still mooing but not being sure if the chef would understand the request for a ‘blue’ steak he said ‘rare’ instead. 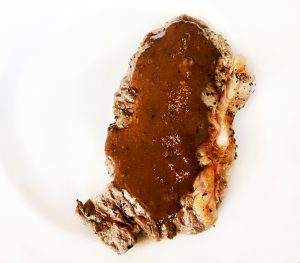 First, the positives. The pepper sauce had plenty of oomph and was well executed. The steak was actually cooked rare.

Then the negatives – the meat was tough and leathery and laden with fat and gristle. Gluttonous husband gave it away as a bad joke. Strangely, when ordering a steak (rather than having beef in a dish) in China we’ve been stunned at how tough the meat has been.

Things were winding down. We’d actually had a supervisor come by at one point and fill up our glasses at the table but other times we needed to flag down a waiter and request a refill. They’d take our glasses away, they’d come back filled, and be put down in front of us. Did we get the same glass each time? Who knows.

Gluttonous husband spied an ice-cream station that included one of his all time faves – rum and raisin. While he normally tries to stay away from sweets, he decided to treat himself and pronounced it very good. Greedy Girl doesn’t usually eat ice-cream but was intrigued by this: 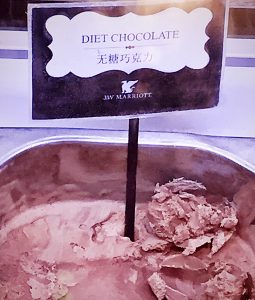 What makes it ‘diet’?

Greedy Girl tried a scoop; it wasn’t at all creamy so perhaps that’s what made it ‘diet’ chocolate. Still, it was one of the few chocolate options available at the dessert buffet.

She took a few selections, including a couple of cupcakes (not pictured). Without exception anything ‘cakey’ was dry and uninspiring. 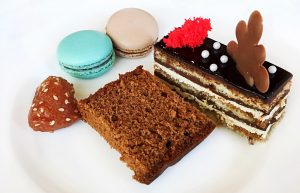 The macarons were quite nice – hazelnut and raspberry (the blue one). The opera slice (top right of the picture) was OK but had no appreciable hit of choclate. The cake was totally unmemorable. The best thing on the plate was the chewy sesame mound. It wasn’t toffee but there was a gelatinous consistency to it and quite moist.

Gluttonous husband opted to finish with a cheese selection but there was no bread or crackers available to eat this with. While disappointed with the blue he said the other cheeses, including a brie, were OK. 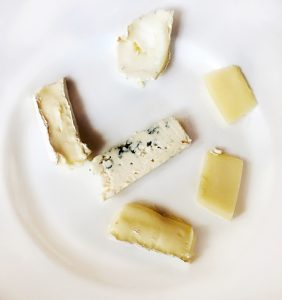 And we were done. We weren’t made any offer of coffee or tea and decided it was too hard to try to ask. We paid our bill, tried to avoid paint-covered little fingers at the kids’ play area out front and headed off.

Generally we like the champagne brunches in Asia because we get decent value for money – drinking champagne throughout the region isn’t particularly inexpensive, so it’s a great way to enjoy champagne at a reasonable price point. Some of the food was good, but nothing (apart from the sushi selection) reached any great heights.

The language barrier makes things hard in China and perhaps we weren’t fully prepared for the impact. Still, there’s no reason why wait staff can’t be trained to engage or make the effort with non Chinese patrons.