What an absolute revelation is Gaggan Bangkok. Anointed as the number one restaurant in Asia in the San Pellegrino list and #7 on the world’s 50 best list, it’s a hugely entertaining and enjoyable feast.

At the helm is Indian chef Gaggan Anand. If you can believe Wikipedia, he started out life wanting to be a rock musician but went into cooking. Given chefs are the new rock stars these days, it’s not such a stretch.

Gaggan is in a little side alley off Soi Langsuan. It’s fairly easy to navigate to from Chit Lom BTS station if you don’t want to brave Bangkok’s extraordinary traffic. The restaurant has traditional tables over a couple of levels, but all the action is to be found at the chef’s table.

This was our second visit in three months. Our first experience was so wonderful, we immediately asked if we could get another spot for this trip. That evening, the chef himself wasn’t to be seen and his sous chef directed the evening.

The chef’s table is in a U-shape around the preparation kitchen, seating up to 16 people. The first sitting is 6pm sharp and we found ourselves among a veritable United Nations of guests. Unlike the first visit, this time we were the only Australians.

Ordering a bottle of Laherte Freres brut champagne, we sat back and listed to the rock music belting out from the sound system, while Gaggan himself oversaw the final stages of preparation. Music plays a big part of the chef’s table experience, but more on that later.

And so the floor show unfolded. Gaggan told the story of each dish, as well as a few rollicking anecdotes about life in Thailand, his disdain for restaurant dress codes, the fact that the rise of global fine dining makes people pay to eat ants, and his goal that – at some point – his 25 course menu could be consumed entirely by hand, i.e., no cutlery.

We were the only diners who’d eaten there before and while we hoped for a number of different dishes this time, the adherence to seasonal availability meant we’d most likely get more than a few double ups. Greedy Girl was so taken by our first meal here, she desperately wanted to blog it, but not having taken any notes meant it was almost impossible to remember anything. This time she came armed with pen and paper.

There’s no menu at the chef’s table. Diners are presented with a list of emojis that give a sense of what’s to come, but don’t quite tell the full story, so there are lots of surprises. A small description is provided at the end of the meal.

We started off with an ‘oyster’ made from watermelon and pink elderflower edible shell. Light, fruity, refreshing – a perfect way to begin. 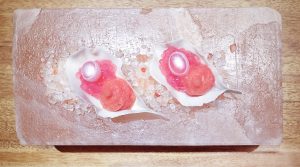 Next up was a dish we’d had before – the yogurt explosion. This is molecular gastronomy at its best – looking for all the world like an egg yolk, but made of yogurt. Amazing. 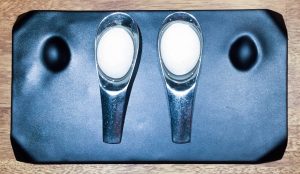 It was time for the tunes to blare out again. The next emoji was a tongue. With ‘Lick it up’ by Kiss turned way up loud, we were presented with this – effectively mushroom, peas and a spicy sauce and instructed to, well, lick it up. While gluttonous husband is noted for his effective plate-licking technique, Greedy Girl clearly needs more practice. The dish itself wasn’t her favourite, but it was an incredible ice-breaker for the table and had everyone in a fun mood. 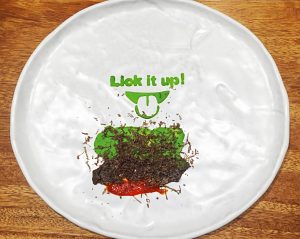 Lick it up? Okey dokey

We then moved to another dish we’d eaten previously, Gaggan’s take on a shrimp cocktail. Tom yum flavours accented the head of a Hokkaido shrimp. Delish. 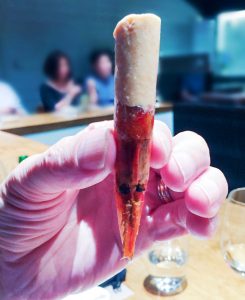 Next up was called ‘flower power’. This was a beautiful looking thing where the coating was made from rice flour and buttermilk but contained goat brain. Honestly, how good can goat brain taste? Hop a plane to Bangkok immediately to try this dish – A-May-Zing. 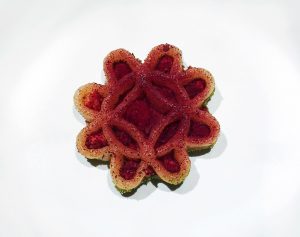 Goat brain? Why, yes, thank you.

An eggplant cookie was next. Gaggan said the processes required to make these morsels, made from an eggplant powder, spices, oil and salt took around five to six days, and is eaten in five or six seconds. The cookie sandwiches an onion chutney and is again, delish. 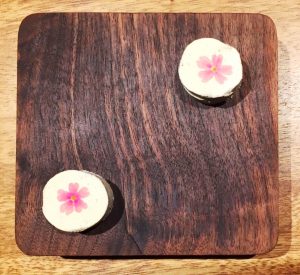 We then had another repeat dish from our first visit, a chilli chocolate bon bon. This needs to be popped in the mouth whole as the centre is liquid. A great combination of hot and sweet. 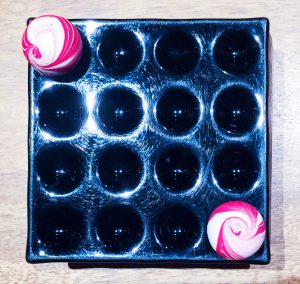 Next up was Gaggan’s take on an Indian breakfast although he says it’s 200 times lighter, tastier and more expensive. He calls it idly sambhar – idly being a cake and sambhar traditionally a lentil-based veggie stew. Certainly it couldn’t be more refined than this. 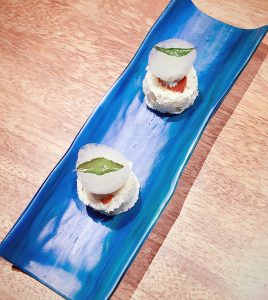 Another incredibly pretty dish was up next. This is a banana chutney with chicken liver, served on a crunchy disc of sesame bread. So good … This is a dish he designed for his daughter, a toddler. His wife and mother told him he shouldn’t give a kid curry at that age but he figured it was in her genes. It’s the only dish he cooked that she would eat. 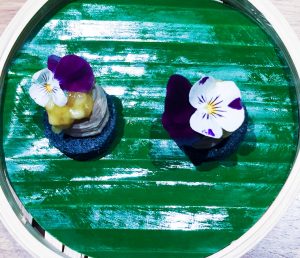 We then had fish ‘granola’. This was sea bass mixed with a variety of little surprises and Greedy Girl was licking her fingers. 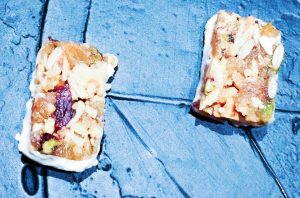 Next up was uni – sea urchin – from Hokkaido served in dill leaf with cucumber, Hendricks gin and tonic and a key lime and horseradish ice-cream inside. Down the hatch it went. 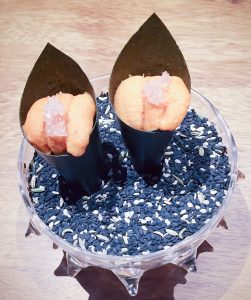 Gin and tonic with cucumber uni

If it seems like there’s a lot of food, there is, but the light touch makes it very easy to consume. Each course is just a couple of bites (for the most part) and it wasn’t until the dessert courses that Greedy Girl started to struggle slightly. But she’s getting ahead of herself. Next up was sushi.

This is fatty tuna belly served on top of a dashi and rice meringue and ‘real’ wasabi. Gaggan says 95% of wasabi is fake – just horseradish with green colouring. The fatty tuna wasn’t easy to bite through so it all went in together. Yum. One of the diners decided she didn’t want to eat the tuna and her partner opted not to polish hers off. Clearly it was too good to waste – Gaggan scooped it up himself. Sensational! 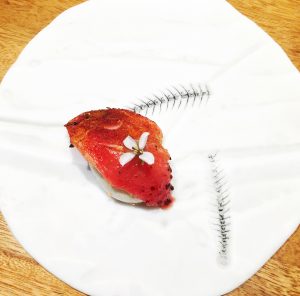 Next we were asked to nominate which hand we’d like to use for the next course. It was sprayed with yuzu juice and then we were invited to pick up a carrot waffle filled with foie gras. OMG. So, so good … the crunch of the waffle was divine with the foie gras. The point of having the hand sprayed was just to have the fragrance of the yuzu accompany the waffle. 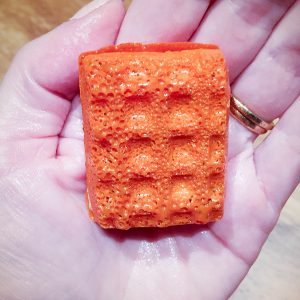 We moved on to what the restaurant calls matcha – it looks like typical green tea would be prepared. A tiny spoonful of vibrant green powder is placed into a bowl and whisked to reveal this lovely frothy concoction. But that’s where the similarity begins and ends. There’s no green tea in evidence here – rather it’s celery, cucumber, apple, red chilli and green tomato with green asparagus powder. Another triumph. 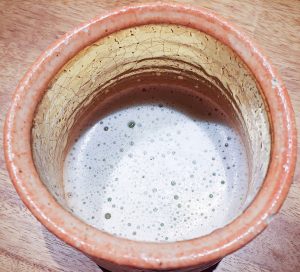 The chef kept relating stories about his approach to food and turning other chefs in his adopted city on to his way of cooking. He was cooking in a major hotel in Bangkok and found the local chefs were particularly averse to using salt, unless it was delivered via fish or soy sauce, so he created his own brine and the chefs felt right at home. Amazing.

Next was his take on pork vindaloo – done in tonkatsu style, dotted with Japanese mustard. The texture of this was to die for. Crispy crust and soft pulled pork within. Yum. 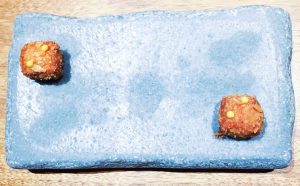 We hadn’t needed cutlery up to this point, but a knife and a spoon were laid before us. Knife and spoon? The dish was one we’d also had previously, an ‘uncooked curry’ featuring scallops, topped with crispy fried onions. This is another OMG. The scallops were dressed with two sauces – one red, one green. The red chilli oil was named ‘sex’ while the green curry oil was ‘making love’. Together, Gaggan opined, you get the kama sutra. Okey dokey.

Still, this is one sexy dish. So fresh, vibrant and tasty. Lurking beneath the green leaf on top was a quenelle of coconut and salt ice-cream. Mmmm, drool … 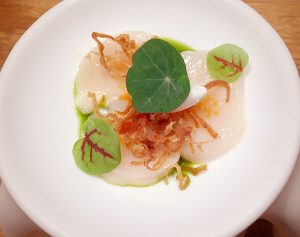 Next up was a ‘sheek kebab’ with mango chutney. The sausage on the skewer was an incredibly tasty lamb mince and, among the fronds, were two leaves unlike the rest. These are wrapped around the sausage to give the flavour of the mango chutney. So clever, so delicious. 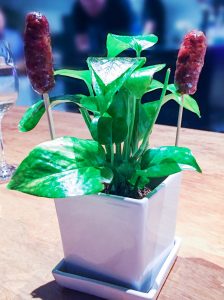 A Thai green curry was next – this was piped atop a piece of crispy chicken skin, with a couple of button mushrooms dotted about. 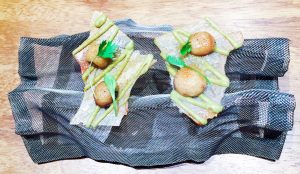 After this, the lights were dimmed and the music blared out again. This time it was AC/DC’s ‘Thunderstruck’ as the chefs set fire to what looked like little banana leaf parcels containing seabass and a Bengali mustard sauce. Here’s how it arrives at your position – with embers still glowing and then, once you open it up, an incredibly moist and flaky fish. 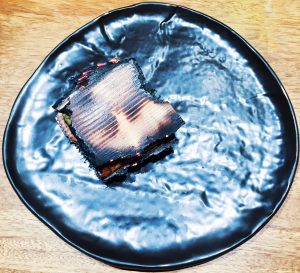 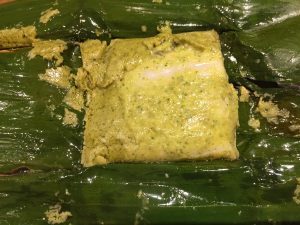 Even gluttonous husband was starting to struggle by this point but the remaining emoji list was reasonably short. Next was a dish called charcoal – essentially it’s black on black. The coating is eggplant but the chef played 20 questions around the table to see if one of us could guess what was inside. We all failed. It was lotus stem and very delicious it was too. 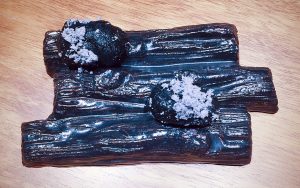 Our final savoury dish is pictured at the top of this post – a lobster dosa. Dosa is the lentil and rice pancake, containing a lobster curry with raw mango and coconut. So good!

It was time for a bit of a sweet hit. First up was a dish we’d had before, presented in a book. 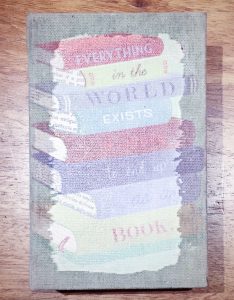 It’s opened to reveal two incredibly pretty rosettes, made of beetroot and tonka bean. Greedy Girl despises beetroot but these are just fine, thanks very much. 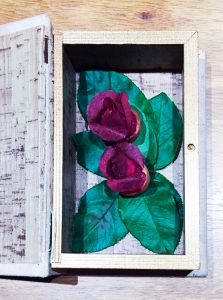 With a nod to Asian cuisines, the next dessert was a milk cake, shaped to look like a traditional moon cake, made from a riesling muscat ice-cream. Incredible. 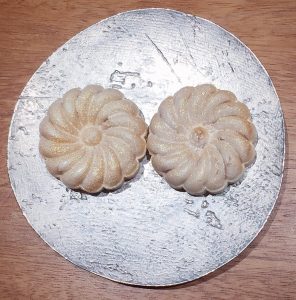 Next up, a platter of ‘mini Magnums’ was passed around. These were made of the lightest lemon cheesecake, with dots of red velvet cake inside. A fun twist to the decoration (red for girls, blue for boys) and very yummy. 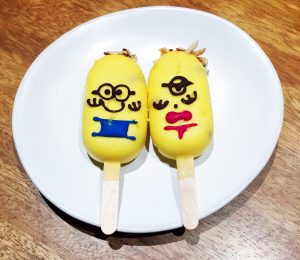 Finally, or so we thought were mango saffron ghewars – a Rajisthani sweet. They weren’t overly sugary and a nice way to finish … 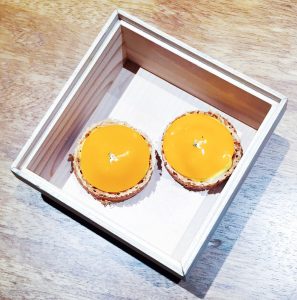 … we were starting to relish the thought of being vertical to make some room in the tum, when an additional treat was passed around – chocolate and raspberry crunchy clusters. Oh dear. Greedy Girl, who was adamant she wouldn’t eat anything more folded faster than Superman on laundry day. 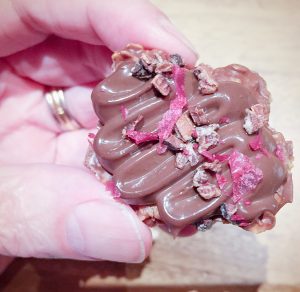 And we were, in fact, done. While the kitchen prepared for the second sitting, we tried to get our bodies moving to head out into the Bangkok evening. A short stroll back to the hotel was just what the bursting belly required.

Gaggan has already announced he will close the Bangkok restaurant in 2020 and start up again in Japan – a place he says he’s visited ‘70 times’ in recent years. The new restaurant is supposedly to be named ‘GohGan’ and will be a 10-seat establishment in Fukuoka. Greedy Girl wonders whether she could get a reservation now?

Get to Gaggan while you can. It’s huge fun with exceptionally clever and tasty food.