We’d been told good food wasn’t going to be high on the agenda in Amsterdam – from expat Dutch people we’d met and also fellow travellers who told us to be satisfied with croquettes and visits to Indonesian restaurants. Keen to find out what constituted Amsterdam fine dining, we took a leap of faith and made a booking at Restaurant Mos.

This is part of a groovy little enclave on a man-made island in the river Ij, a 10 minute walk from Amsterdam Centraal railway station. We were staying just a few doors down at the Aitana – a huge bonus given the weather in December was (by Australian standards) frigid.

In the lead-up to Christmas, there are a lot of parties. Indeed, the whole top mezzanine floor of the restaurant this particular evening was taken up by revellers. We were on the first floor which was home to the fine dining menu and, again, very crowded. Indeed, when Greedy Girl asked the person at the door if she could keep her coat (still feeling cold), this elicited a frown and she was told there wasn’t enough space upstairs for that. Hmmm.

We were shown to a table with a wall behind us, away from the windows overlooking the river. It was a little disappointing to not have the view, but we were relieved to find it was certainly a warm and cosy spot.

Even before we’d looked at the menu, a number of treats arrived – all vegetarian. First up were little orbs of cauliflower sitting on cheesy crisps and topped with violet mustard and little twisty churros topped with a jalapeno chutney. Both were quite delicious. 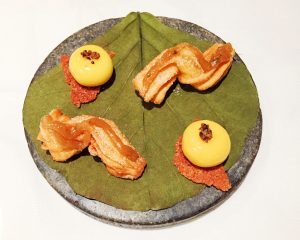 Next, we were offered onion crisps and the restaurant’s take on a Dutch classic – frites with mayonnaise, but these were little potato straws with aerated piccalilli. Again, both very tasty. 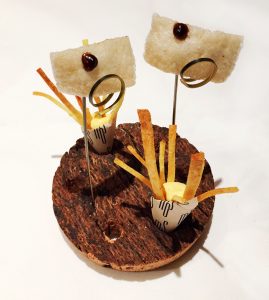 And then, it was time for pumpkin pannacotta with allspice and a white port glaze, topped with a pumpkin seed and wild rice crumble, accompanied by puffed crisps with parmesan and pumpkin. 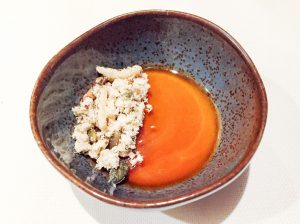 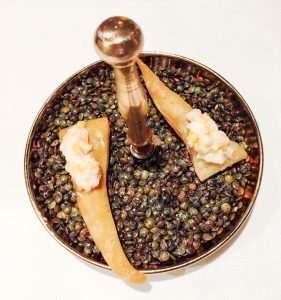 Puffs with parmesan and pumpkin

All of these were seriously good and primed us for the meal. We’d initially thought of ordering a la carte instead of a tasting menu but on the strength of the amuse bouches we decided to do the full degustation. The chef appeared at the table to discuss options. There was one dish on the a la carte menu we wanted to try, featuring sweetbreads and veal and we successfully negotiated replacing a cod course with that. We were warned it was a lot heavier, but we couldn’t pass it up.

It was time to order wine. We chose our ‘go-to’ French red, Chateauneuf-du-Pape. This was Les Quartz 2013 by le Clos du Caillon – apparently rated extremely highly by US wine guru Robert Parker. A sublime drop.

Before our wine arrived, a basket of lovely dark, grainy dinner rolls was brought to the table with some very good butter. Europeans certainly know how to bake bread. It was so good we had to force ourselves not to finish the enitre offering and have no room left for the menu.

Our first dish was marinated mackerel with oyster emulsion, crispy seaweed, Peruvian corn, ‘sereh’ (or lemongrass to the English speakers) and black sesame. 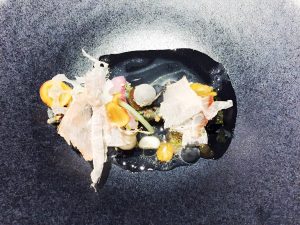 This was a light and fresh dish. The black sesame and crispy seaweed wafer was delicious, but the oyster emulsion was a bit strong for Greedy Girl. Gluttonous husband hoovered his up.

We then moved to a dish of roasted hake with mousseline of ‘la ratte’ potato, smoked almonds, bacon and a white port sauce. It also had slices of grapes which worked well to cut through the richness. This was a triumph – a beautifully balanced, very moreish plate of food. Every last smudge was mopped up. 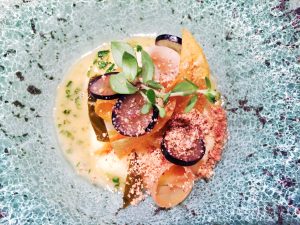 Our next dish was the one the chef suggested dropping to include the veal and sweetbreads. It was a truffle risotto with boudin blanc and noir, crispy parsnip, ‘vacherin mont d’or’ (a type of cheese) and a lovage gravy. There’s no way Greedy Girl was going to pass up a truffle risotto and this was exceedingly rich and delicious. The triumph here though was the crispy parsnip, which gave a wonderful texture. 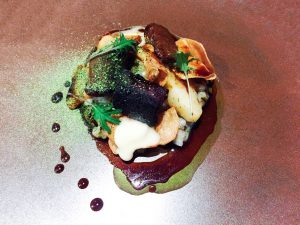 We were very impressed with the food but also with the service. We had a delightful waiter who was very adept at managing our wine throughout the meal. He could have easily continued to pour but he was smart enough that we wanted to just keep a small amount in our glasses at any one time – and we didn’t have to say a word.

Next up was pheasant, roasted on the carcass, with yellow cabbage, goose liver, sprouts and a liquorice sauce. We intially contemplated dropping this dish, but the chef said it was a ‘must have’. 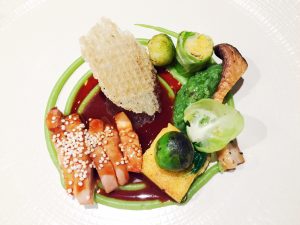 Generally, Greedy Girl is not fond of game, not particularly enjoying the strong flavours. This meat was exceptionally mild and a couple of pieces were a bit chewy. The ‘crisp’ you can see in the image above is actually pheasant skin and it was particularly nice. The goose liver was delightful also. But let’s get to the sprouts.

Greedy Girl remembers one of the early occasions in dining at Melbourne chef Shannon Bennett’s original Vue de Monde restaurant. There, she’d eaten baby broad beans (another green she’s always detested) and really enjoyed them. On the way out, we were introduced to the chef and, having marvelled at his touch with broad beans, the question was asked whether he could perform similar miracles with Brussels sprouts. His response? ‘I don’t cook what I don’t eat.’

And no matter how many times chefs have tried to spruik the ‘delights’ of sprouts, Greedy Girl has never enjoyed their bitter taste and this dish was no exception. Gluttonous husband, he of the more bitter palate, scooped them up.

And so we came to our final savoury course, crispy fried sweetbread and veal, served with palm heart and a gravy made from an Indonesian pepper. 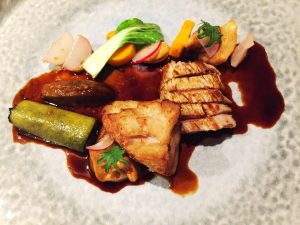 This was a very nice but undoubtedly heavy dish to have as part of a tasting menu. We did rather enjoy it though, especially the sweetbread. All elements of this dish went together exceptionally well.

And we were done. Greedy Girl had already negotiated a different dessert from the one that is part of the tasting menu, but our friendly waiter approached us to ask if we’d like to finish our wine before we moved to dessert. Bravo! Obviously someone who knows and cares about food and the dining experience.

When the desserts did arrive, Greedy Girl had the dish featured at the top of this post – an homage to chocolate and pears with a number of different textures, including some delicious hazelnut crumble. So good!

Gluttonous husband had the standard dessert for the tasting menu – citrus, white chocolate, salted honey and goat yogurt. He said it was light and refreshing but knowing Greedy Girl doesn’t particularly enjoy yogurt, he commented she’d made the right call. 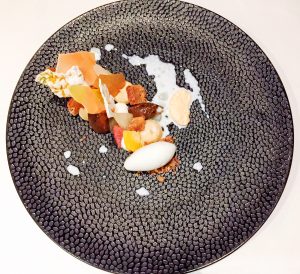 Very content, we asked for the bill and prepared to depart, with only a short trundle back to the hotel to ease our full bellies.

This was a real find and a fine dining experience that would stack up anywhere in the world, reflected in the fact the restaurant has already achieved a Michelin star.

Amsterdam fine dining is not a contradiction in terms – far from it. This is exciting and satisfying food, perfect for a cool winter’s evening in this extraordinary city.