Indeed, the Swissotel The Stamford (don’t confuse it with the Swissotel Merchant Court) shares many of its facilities with the Fairmont hotel next door.

On a previous visit, not long after the hotel opened, it was freaky enjoying high tea (actually, very high tea!) at one of the 70th floor restaurants. A thunderstorm blew in – as is the case on a great many afternoons in Singapore – and all the action was right outside the windows. That wasn’t for the faint hearted!

We’ve had a number of dining experiences here. The City Space bar (also on the 70th floor) used to have a great deal for Moet et Chandon. Sadly, that’s no longer the case. We’ve also had the champagne Sunday brunch at Equinox. That was a bit hit and miss. The best by far that we’ve experienced is the amazing Jaan.

But it was time to stay here, thanks to a Luxury Escapes deal. This Australian-based brand has carved a niche offering a host of extras on top of discounted hotel stays, all packaged together.

We had solid expectations; reality was somewhat different. So here’s our Swissotel The Stamford review.

Given the building has been in place over 30 years, it’s perhaps not surprising that the hotel itself looks a bit dated. Part of the exterior is swathed in netting where refurbishment is taking place. We had a room on the 55th floor and, based on view alone, it was pretty spectacular (as you can see from the picture at the top of this post). 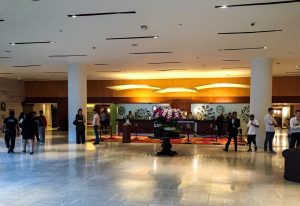 And that was pretty much the lone highlight of this stay.

We’d originally been allocated a room on the 53rd floor, which the check-in agent told us had ‘two beds’. Rather than two Queen beds that we’d seen before throughout Asia, this was two single beds, in a room with a decidedly musty smell.

We objected at check-in, saying we’d requested a King bed but were told this wasn’t available but might be possible the next day. Once we saw how poor the room was (and smelled it), a call to the duty manager reaped fruit – suddenly a room with a King-sized bed was available. Honestly? Does it really take kicking up a stink to get  this to happen?

The rooms are very bland, dominated by autumn tonings. The bed is also rock hard. We were there for three nights and just as well – our hips and backs probably couldn’t have coped with another night sleeping on that surface. The bathroom too, was very dated – the dreaded shower over the bath and poor ventilation. All the mirrors fogged over while showering. At least the water temperature and pressure was decent. 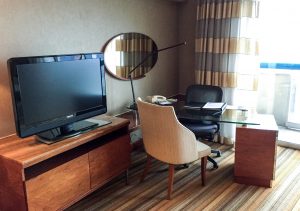 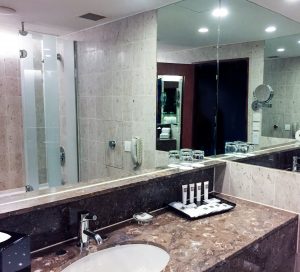 There is a small balcony off the bedroom which isn’t something you’d want to drag out a chair and sit out on. It also doesn’t do a lot for noise insulation from the street level, although the room itself is fairly quiet.

In terms of amenities in the room, we were relieved to see a safe for valuables. We just didn’t expect it to be so big, and to take up all the hanging space for anything long. 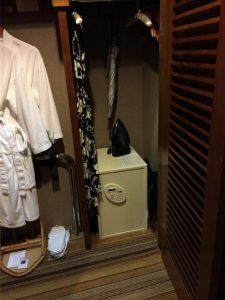 Enormous safe, so no hanging room

Our deal entitled us to an evening cocktail – in either the Antidote bar (on the ground floor in the Fairmont next door) or in Bar Rouge, a small flight of stairs up from the Equinox restaurant on the 70th floor. Our first night in, Bar Rouge wasn’t open, so we headed to Antidote where the cocktail list was quite attractive and the drinks were presented likewise. 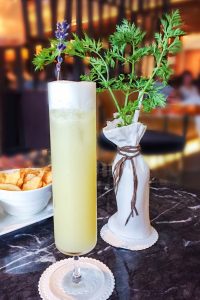 On the left is a ‘Lord Kane’ with Bacardi, salted pineapple, lemon juice and lavender coconut syrup. On the right is ‘Rabbit Hole’ with lemon and carrot juice, Hendrick’s Gin, pineapple, elderflower and mint. Of the two, the latter was probably the best but it was drunk in a couple of sips – a bit scary if you’re paying S$23++ for the privilege.

Breakfast was also disappointing. Even though our first morning we arrived very early, the tea tasted stewed – like it had been prepared hours earlier. A station that offered fresh juices was also underwhelming. Ordering a carrot and apple juice, and expecting to see the juicer fired up, a glass was produced from a refrigerator. It may have contained carrot and/or apple juice but there were other flavours as well and they weren’t pleasant. Coffee was produced from a machine which kept flashing up an error message saying it needed to be cleaned.

The only upside of the breakfast selection was the egg station, where omelettes were prepared to order and were quite tasty. A small selection of Chinese delicacies was of low standard. 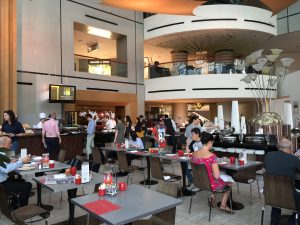 But what was most aggravating was having to wait in a queue to get into the breakfast area. This wasn’t handled well at all. Luckily we were directed to clean tables. Other diners who were guided to dirty tables left in a huff.

We tried out the pool, which is situated between the Swissotel and Fairmont. It’s a reasonable enough spot, but very little shade and no wi-fi reception. 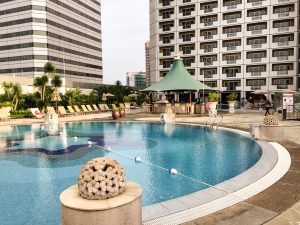 The second night, we tried Bar Rouge, where the cocktails were more traditional. It’s a thumping place with techno music, fuschia pink lighting and reasonable drinks – we had a passable Cosmopolitan and a Mai Tai. 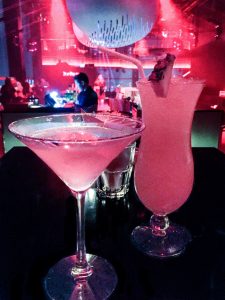 Our final night, we availed ourselves of the final part of the package – a multi-course meal at Kopi Tiam, a restaurant on the second floor serving Singapore hawker-style food. It was, at least, edible.

As you can probably tell, this was a very underwhelming experience. Was it worth even the discounted rate? Not in my humble opinion.

The Swissotel The Stamford desperately needs a makeover – in its rooms, its facilities and in the attitudes and demeanour of many of its staff.