Where to eat in Canberra – Vincent

The food and wine culture in Australia’s capital city has been boosted dramatically of late. Given this is a city plonked in the middle of some of our country’s best agricultural land it’s a bit of a mystery as to why the food scene took so long to thrive. Asking the question ‘where to eat in Canberra’ now offers up a myriad of possibilities.

Having enjoyed some excellent coffee at Ona in Manuka earlier in the day, we were assured that Vincent was a good option for dinner. Vincent is a wine bar in the suburb of Barton, a cork’s throw from the Parliamentary precinct with a solid reputation for food.

Essentially this is communal dining in a dark and moody interior. Apart from a few tables for groups on the far wall, diners perch on high stools around long, square bars. Happily, as patrons arrive, they’re seated in various areas, rather than all on top of each other. 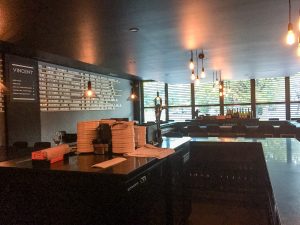 The food and wine on offer make a feature on the far wall, but a small menu is also provided. We opt for the chef’s tasting menu of six courses at A$75 per person. Greedy Girl tucked into an Italian Pinot Grigio, while gluttonous husband decided to sip a beer throughout.

Interestingly, there are very few local wines on offer here. The selection is dominated by European varieties. Greedy Girl spied two of her ‘go to’ European reds, a Valpolicella and a Chateauneuf-du-Pape so was well pleased.

And so, we tucked in. While there are some small plates for snacking if you’re just looking to have a drink, we plunged straight into the menu.

First up is a scallop dish with smoked cauliflower, speck and dashi. It was enjoyable. The scallops were very plump and had a nice seared crust, but they were a fraction overcooked. The combination of flavours though was very good. 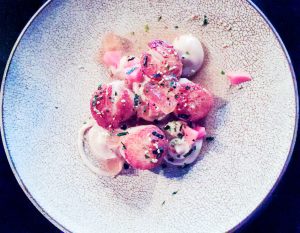 Next was the dish featured at the top of this post – tiger prawns with soubise (an onion sauce), black garlic, creme fraiche and leek ash. It was beautifully presented but, sadly, the prawns were overcooked and had gone a bit mushy. Still, the flavours worked together well.

The fish courses continued. Up next was a fillet of barramundi, with lovely crispy skin, served on vichyssoise, leek, creme fraiche and capers. The fish was cooked really well but neither of us felt like it went with the vichyssoise, which was a bit stodgy and bland. There wasn’t any appreciable flavour hit from the capers either. 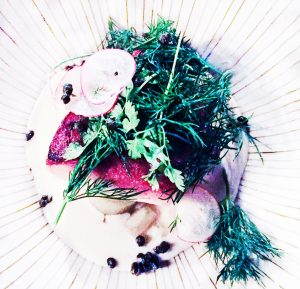 At this point, our plates were changed. Given each of the dishes came with sauce, which had mingled to a degree on our plates, we thought it was odd they weren’t changed after each course, especially when our plates were replaced for each of our three meat courses to come. Ah well, c’est la vie.

Our next course was Peking duck with orange, chilli, coriander and cashews. Greedy Girl, not being a fan of coriander, asked how dominant it was in the dish. The response was ‘not very’, so she opted to have it as the chef devised. 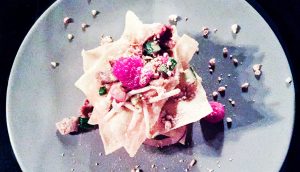 This dish was quite spicy – probably too spicy for the rest of the flavours on the plate. Rather than present the duck with traditional pancakes, fried wonton wrappers were stacked, with layers of duck between them. An odd addition was two fresh raspberries. It was OK, but the spice overwhelmed the star of the dish – the duck. We didn’t get into the raspberry, but the crunch from the wonton wrappers was a nice touch.

Next was pork belly with creamy cabbage, apple, grapes and jus. There were actually two types of cabbage on the plate – a red variety which Greedy Girl didn’t enjoy. She also didn’t like the grapes which she found overly sweet. The pork itself was a bit dry (unless you got a bit of the fat) and didn’t have crispy skin. There was no appreciable flavour at all from the apple. The dish could have also done with more seasoning. 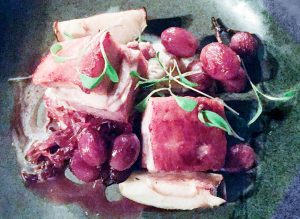 Pork belly with grapes and apple

We had a choice for our final savoury course, between a lamb or a wagyu rump. We went with the wagyu, served with miso mushrooms, baby turnips and horseradish snow. 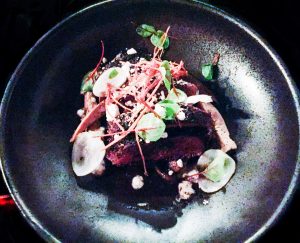 The beef here was very salty and rather overcooked – especially if you got an end piece. The horseradish snow also melted very quickly and didn’t give any heat to the dish. The mushrooms were very tasty. All told it was OK. The dish was served with a side of thick cut chips and aioli. These were perfectly fine. 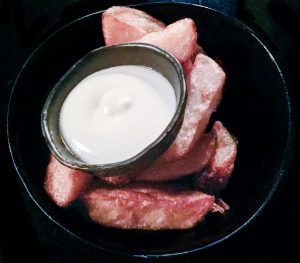 And we were done. By this point the restaurant was quite busy and we weren’t asked if we wanted dessert or cheese. Indeed, it’s an odd tasting menu that doesn’t include a pud, but …

A word about the wait staff – they’re all fairly young and clearly passionate about what they do. One team member asked Greedy Girl’s opinion about the pork dish where, unlike all the other dishes we had this particular evening, elements were left on the plate.

So, we gave our opinion – pretty much as I’ve described here. It has to be said, while we were ‘thanked’ for the feedback, we didn’t exactly feel ‘thanked’. In fact, we were pretty much left to our own devices for the rest of the evening – no enquiry about dessert, no asking if we’d like anything else to drink. Given the first team member who’d looked after us on arrival was very chatty and pleasant, it was a bit of a disappointing way to end the evening.

It’s getting easy to answer the question ‘where to eat in Canberra’ – Vincent had some good points and some underwhelming ones, but it’s a step up from our experience of travelling to Australia’s capital over a very long period of time. Hopefully it’s the start of much, much more.