The Canberra suburb of Barton is dominated by the nearby soaring spire of Parliament House but it’s also a hot spot for food. Having already sampled Vincent on this foodie tour, we were keen to try a different cuisine. Chairman and Yip styles itself as home to ‘elegant’ Cantonese cuisine and it had the benefit of being a short walk from our hotel. Sorted.

This area is dominated by a group of hotels, all virtually in a line. Closest to Parliament House is where we stayed – Little National, while Hotel Realm is in the middle and the Burbury Hotel just behind. Chairman and Yip is the major restaurant in the latter and it has a great vibe. The interior is dominated by dark wood and a modern take on red Chinese lanterns.

We opted for the dinner set menu which, at A$68 per person looked to be a very good deal. Of course, being Cantonese cuisine, dishes come to the table rapidly, so don’t expect to linger here. A local Bent Spoke Crankshaft IPA and a glass of Billecart Salmon champagne lasted the whole meal, which consisted of five courses with Chinese greens and rice.

First up was a delectable roast duck and mushroom pancake. This was brought to the table on a platter and served on to individual plates. We were relieved to see cutlery as well as chopsticks because this wouldn’t have been easy to eat without a knife and fork. 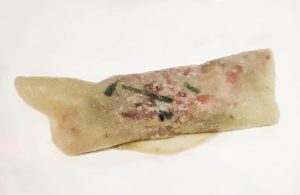 The combination of duck and mushroom was utterly delicious. Greedy Girl would have relished a bit more hoisin sauce inside but it went down a treat.

Next up was the dish featured at the top of this post – zucchini flowers filled with crab and prawn. This was an OMG moment and a foodie first – we’ve never had zucchini flowers in a Chinese restaurant before and this dish was an absolute triumph. The filling was perfectly balanced and the parcels were delightfully crispy. More please.

We then had one of the signature dumpling dishes – Tang’s dumpling with pork and prawn filling, served with a black vinegar sauce and topped with dill fronds. Again, a very good dish and four dumplings, so any danger of fighting over an uneven number (which seems to be the way things happen during a dim sum feast) was averted.

It was time for our main courses. First up was a Chinese surf’n’turf – beef hot pot with scallops in a pepper sauce. Nicely presented, the scallops were still quite moist but the beef was a bit overcooked for our preference. Still, we were surprised how well the dish went together. 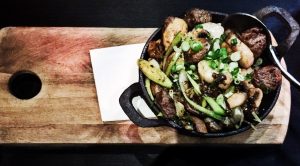 This was served with plain rice and Chinese greens, topped with flaked almonds. 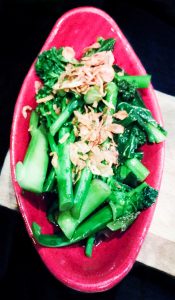 And the final dish was Shantung lamb belly – cooked crispy, with a soft texture inside. It was beautifully done and gluttonous husband was particularly pleased. Delish. 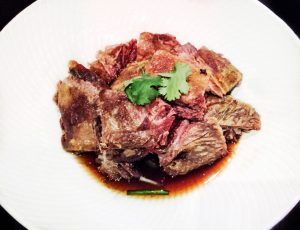 And we were done. It’s interesting that both here and at Vincent, the standard tasting menus don’t have a dessert course ‘built in’ but no mind – we were happy to head off, having had a power of food and (being Easter) indulged in a little chocolate treat with a cup of tea much later.

This is very accomplished cooking in a pleasant setting. The service is exceptionally good, with wait staff who are both knowledgeable and passionate.

Barton is about 10 minutes’ drive out of the centre of Canberra (also known as Civic) and it’s well worth a visit to sample this exceptional modern Chinese cuisine.