Where to stay in Canberra – Little National Hotel

When you’re considering where to stay in Canberra, it helps to have an idea of what you want to do in Australia’s capital city. If you want to be downtown – or what the locals refer to as ‘Civic’ – the Little National Hotel possibly isn’t your best choice – unless you’re happy to go for very long walks or have car transport.

We headed there over the Easter break and decided to stay in the suburb of Barton – just next door to Parliament House. It was a short walk to our main destination, the National Gallery of Australia, and many of the food/wine/coffee spots on our list.

Canberra was created as Australia’s capital when no-one could agree on locating it in either Sydney or Melbourne. It has a remarkably similar vibe to Washington DC. While the US capital is located on the Potomac, Canberra is dominated by Lake Burley Griffin. The style of architecture is, for the most part functional rather than spectacular.

And, when parliament is not sitting, it can be a sleepy spot – even more so over Easter when most of the restaurants, bars and cafes in Civic are closed. We were there to visit a travelling Cartier jewellery exhibition and try the emerging food and wine scene.

Canberra is in the middle of a largely agricultural district. There’s plenty of great produce around, including wineries. The coffee and restaurant scene, in terms of generating some excitement, has come to the fore relatively recently.

Autumn in Canberra is a wonderful time of year to visit. It’s very leafy so the colours in the trees are beautiful but the hard pods falling from them onto pavements are less enjoyable, especially if you’re a girl wearing heels. It’s very easy to tread on them and twist one’s ankle.

Little National Hotel is part of the Realm group. Hotel Realm is just across the road and behind it is the Burbury Hotel, home to an excellent Cantonese restaurant, Chairman and Yip. The hotel itself is two floors on top of a large car park. It’s a nice-enough looking building, but we were both relieved that Easter being a quiet weekend for the surrounding offices, we had no fear of any noise coming from cars. 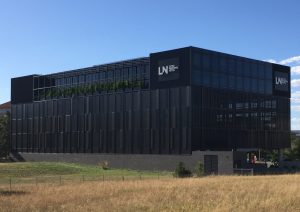 The lobby is understated chic, with its only food and beverage outlet, Cafe Ritual separated behind a large glass wall. This is only open during the week. We checked-in right on closing time so didn’t get to sample its wares.

All the rooms are the same – what the hotel terms a ‘super’ king-sized bed up against the large window (as you can see from the picture at the top of this post) a TV on the wall, a small cupboard and table, and a fairly decent sized bathroom.

It reminded us a lot of Citizen M in London’s Bankside – the only thing missing was the ability to dial up ‘mood lighting’ in the bathroom. There’s also very little space for luggage – unlike London where the bed lifted up to reveal storage, you just need to park your suitcases wherever you could. Luckily we only had small carry-on cases.

The hotel offers free wi-fi and movies on demand. The TV was just too close for us to watch from the bed, so we didn’t use it. The wi-fi speeds are OK – fine for web surfing and emails.

The bed/pillows were OK – the bed itself was reasonably soft without any mattress sag. But if you’re travelling as a couple, be prepared to have to climb over your partner if you need to get up in the night. That was annoying but far from a deal breaker.

Noise insulation wasn’t particularly great between rooms. Neighbours one morning had an excitable toddler and the squeals were a bit piercing. Such is life in hotels.

The bathroom was very good. There was just enough bench space/storage for toiletries, a very good lighted mirror and a walk-in shower with a sliding door that didn’t leak and had decent water pressure. 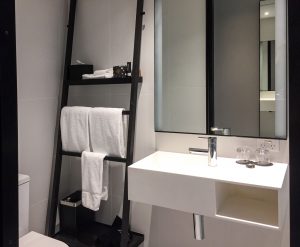 While you need to head across the road if you want breakfast on weekends, there are some places to relax outside your room at Little National – the library and the lounge.

Here’s the library, which would probably be well patronised by people in Canberra to work. 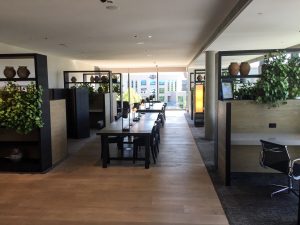 And here’s the lounge, which has a small bar operating in the evenings. We didn’t opt to have a drink there because the offerings were very limited, but on a cold Canberra night (and there are plenty of those year round) it would be a pleasant spot, especially when the large fires were blazing. It certainly has a very nice aspect. 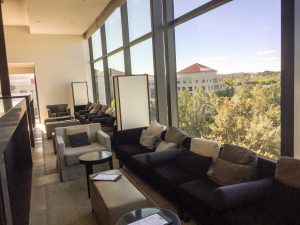 For a couple of days this is a comfortable enough spot. Just be aware it’s a fair distance from the central business area and you need car transport. A bus line does go down National Circuit but most of the stops don’t operate on weekends – and who wants to spend their precious holiday time cooling heels at a bus stop? We had to actually request our rooms to be made up on each of the three days we were there which was slightly aggravating given we then had to wait in the lounge area while this happened. It also didn’t seem the sheet sizes for the bed were big enough as the mattress was easily uncovered.

Value for money, and some reasonable food/drink and coffee (in nearby Manuka) offerings though make this a decent proposition for where to stay in Canberra.