There’s still plenty of evidence to be seen of Ballarat’s heyday. About 120 kilometres west of Melbourne, Ballarat was the epicentre of Victoria’s gold rush back in the mid 1800s. There are amazing old colonial buildings and plenty of tourist traps harking back to prospecting times, but we were looking for a different kind of gold – a decent feed.

In terms of where to eat in Ballarat, you have plenty of choice. Like many of the regional towns within an hour and a half of Melbourne, there’s been a concerted revival in their food scenes. The lower entry costs, stable local populations and excellent produce also appeal to some very good chefs.

Craig’s Royal Hotel was built in 1865 and it’s an imposing building. We headed for The Gallery bistro which has a decidedly French feel. It’s a large atrium room with checkerboard tile floors and bentwood bistro chairs.

The chef here is Shannon Easton, with Melbourne luminary Ian Curley as consultant chef and the food is definitely European; the plates are beautifully presented and the flavours spectacular. Apparently Easton started at Craig’s as an apprentice – he’s certainly learned his trade very well.

We were presented with an extensive wine list and a small cocktail menu. Sadly we still had much further to drive on this trip, so settling in with a fine bottle of wine wasn’t on the agenda but, very happily, Greedy Girl spied her favourite cocktail – a Cosmopolitan. And here it is … a very fine tipple. 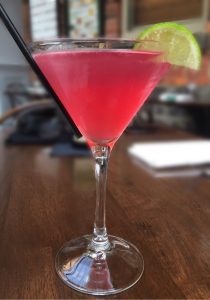 A most delectable Cosmopolitan

We opted to choose a few starters, plus the pie of the day (something the hotel/chef is famous for). First up though was some excellent sourdough with a lovely smoked aioli. It was tempting to wolf that down but we had plenty of delights to come.

Our first plate was the charcuterie selection. We chose the small size and just as well. There was plenty to share – clockwise from bottom left in the picture below, we had jamon, venison sausage, lomo (a variation on iberico using pork loin) and some excellent liverwurst. The accompaniments were some delightful pickled fennel and cauliflower, dabs of mustard and some interesting breads – grissini plus what looked like small pita rounds but were almost hard, like a cracker. 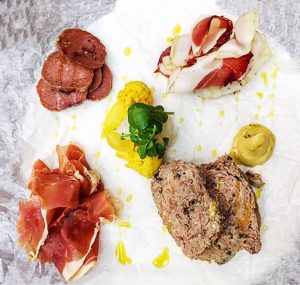 Next, we had what was described as ‘four cheese’ croquettes with smoked garlic aioli. The four cheeses weren’t particularly tangy but the croquettes were soft and enjoyable. Again, we were glad to be sharing the dish as two each were plenty. 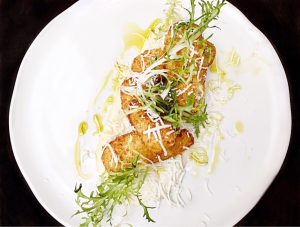 We also took the bruschetta of the day, which was an unusual combination of tomato with herbs (a lot of mint), a very mild goats cheese and walnuts. This was probably a step too far in terms of the amount of food for what was supposed to be a ‘light lunch’. The bruschetta was executed well, but Greedy Girl didn’t enjoy the mint which she found dominant. The walnuts were delicious. 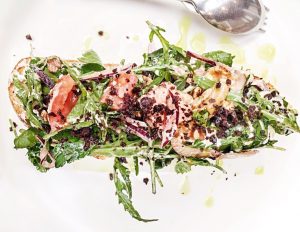 Bruschetta of the day

The chef’s mushroom and leek pithivier (see the picture at the top of this post) won best savoury pie in the 2018 Ballarat Pie Awards (yes, this is a thing!) and what a delight it is. Flaky golden pastry surrounds a creamy leek, mushroom and goats cheese filling, while a selection of sautéed mushrooms, charred leeks and onions filled with a delectable onion puree dress the plate. We were happy to share it – it’s an exceptionally rich and filling dish, especially as the last course.

And we were done. It was a very pleasant spot to while away a couple of hours. The quality of food was excellent and the service very personable, cheerful and warm.