You’re spoiled for choice when it comes to Singapore luxury hotels. All the major global chains are here, including the relatively recently arrived JW Marriott, which occupies an iconic new building at what’s termed ‘south beach’ but is probably more famous for being close to City Hall and Raffles.

Being fans of the Marriott brand, we jumped at the chance when Australian-based Luxury Escapes offered a three-night deal, including executive lounge access.

It’s an easy commute from Changi Airport along the East Coast Parkway. Given our flight from Melbourne arrived late (you can read the blog about the Qantas A380 here), we were up against it to make it to the hotel in time for the evening canapés, which finish at 7.30pm.

Arriving with five minutes to spare, we were a little miffed to find multiple check-in agents attending to other people. Why two hotel staff need to attend to one patron is a puzzle. We decided to take the bull by the horns and ask the door staff whether we could go directly to the executive lounge and check in there. Happily, the answer was yes.

So, off we went, to the second floor and we were greeted immediately by the very nice Melvin who exhorted us to immediately go get some food before it disappeared. There wasn’t a huge amount left, but we found sliced duck on croutons, cheese, some very good chicken mini-pies and a few dumplings. Heading to the bar, we took a couple of gin and tonics and settled in.

And that’s pretty much what we did for three nights. After days packed with various forays, we returned of an evening to snack, sip and relax.

So here’s what we thought of the facilities and the comfort level on offer.

First – the room. The bed is king-sized but looks rather small. That might be from the lack of space around it. Even an executive room is rather compact. We liked the decoration, which is reasonably busy and the layout was quite functional but it was a little underwhelming – especially for the standard (i.e., non deal) price point.

There are a lot of mirrors and that was a little irritating, especially in the dark of the night when the flashing light from the smoke alarms was not only bright but also reflected off the mirrored cupboard doors. There’s a large flat screen TV with a decent selection of English and other language channels and a small desk area. 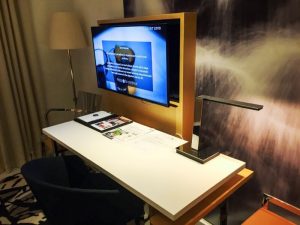 An interesting feature was a sliding mirror in the bathroom that opened the space between it and the bedroom. The bathroom itself is quite large, but dominated by the bath. The shower cubicle was relatively small. 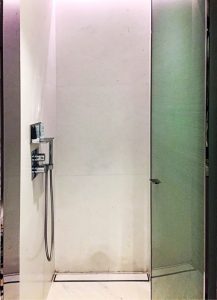 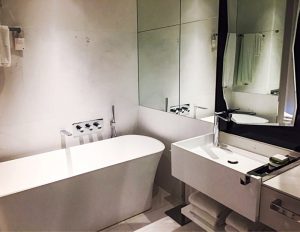 There’s a Japanese toilet, with a sensor that opens the lid as you approach. We thought this was a bit of fun, until the first night where the light turned on and the noise from the various functions lasted for some time after we’d, ahem, finished. The following day we turned it off. Singapore isn’t really a climate where you need a warmed seat in any event.

The bed was very, very firm and for us, just too hard to get a good night’s sleep. The only upside was a good selection of pillows, so we were able to find one that suited us. Small mercies.

Closet space isn’t extensive. There are a few drawers, but the hanging space was not high enough for anyone with long dresses. There is a separate closet near the front door which can be opened by housekeeping or laundry services for them to put service items in the room without necessarily disturbing the occupants.  A nice touch. 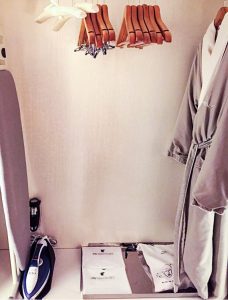 Not enough height in the closet

And so to the executive lounge. This is a big space and it’s dramatically decorated. There are two little glassed-off sections in the middle of the main floor – one orange and one yellow, a spot with tables and sofas near the bar and a smattering of other tables. 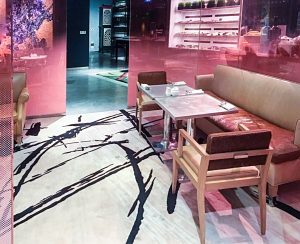 We had breakfast here each day, tried the afternoon tea on one occasion and took full advantage of the evening cocktails and snacks. Breakfast was OK. There’s a chef on hand to prepare eggs (although if you want them scrambled, you get them from a pre-prepared pot that doesn’t keep the eggs particularly hot) and also a noodle station. In the evening, a chef also prepares a few snacks, ranging from grilled ciabatta, to quesadillas, but the most popular item by far are the prawn dumplings (har gow) which are delicious.

Breakfast the first two mornings was remarkably consistent, but on the final morning it was as though the hotel was waiting for deliveries after the weekend – the bread we liked wasn’t available and neither were the usual juices. There was also no bacon. Minor quibbles perhaps but annoying. 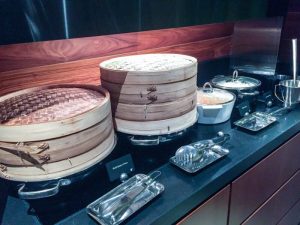 A great place for dumplings 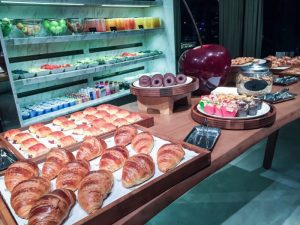 There’s a small cocktail list to choose from, as well as wines, prosecco and spirits. The very friendly bartender said he didn’t have the ingredients to make a Singapore Sling the first night but promised to have them available the following night. And he did. This was seriously strong! 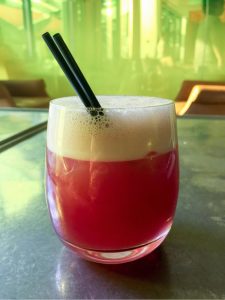 The executive lounge was large and very busy. While a few of the staff members outdid themselves in trying to look after individual patrons, the vibe was more akin to an airport lounge.

The hotel also has some amazing outdoor spaces on the 18th floor – a great-looking pool overlooking the city, lots of lounges, various games (fussball, snooker, table tennis). It’s probably one of the nicer open air options we’ve seen in a high-rise hotel. There’s also a large and well-equipped gym. 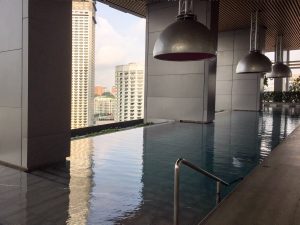 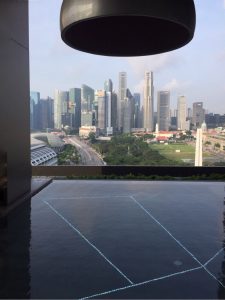 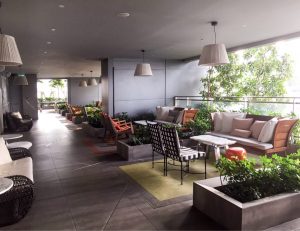 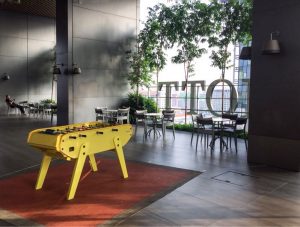 Space for fun and games

Our Luxury Escapes deal also entitled us to a welcome cocktail at the Tonic Bar on the ground floor. It’s a dramatic-looking spot … 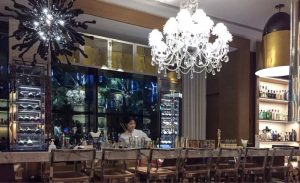 Our hopes of trying something a bit different were dashed however, when we were informed we could basically have what was already on offer upstairs in the executive lounge. Ah well …

The decor here is quite bold and quirky, especially inside the elevators, where the colour scheme constantly changes. We caught it in a ‘green moment’. 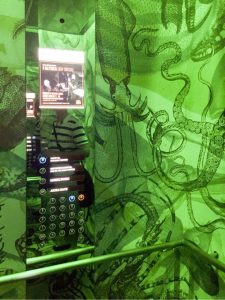 The reception area is long and narrow. Here’s a bird’s eye view of it from the balcony that leads to the executive lounge. 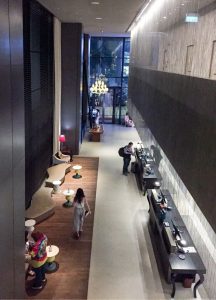 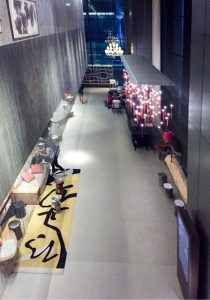 This was a pleasant-enough hotel but was it truly luxurious? It depends on your definition of luxury. For us, it’s a comfortable and quiet bed, a good shower, and a real feeling of hospitality. And, apart from a few instances in the executive lounge, we didn’t really get any of that.

The JW Marriott South Beach is without doubt a stunning-looking spot. Does it offer a good enough return on its price tag? I’m not entirely convinced. The Luxury Escapes deal made it very affordable but it didn’t deliver enough of what it needs, to truly take its place among Singapore luxury hotels.