When in Asia, the Sunday champagne brunch is almost obligatory. For a very reasonable investment (usually) you can spend several hours in comfortable surrounds, drinking fine champagne and grazing on a range of delights.

But Sunday brunches in Singapore had never really wowed us. Our experience at Equinox, atop the Swissotel the Stamford was forgettable, while a birthday celebration for gluttonous husband at the Grand Hyatt’s highly-rated Mezza9 was enjoyable for a group but probably lacked the variety of food we were after. Still, not to be deterred, we headed to the St Regis.

One of the attractions here is a complimentary hour of cocktails at the Astor Bar, just inside the front entrance, before one heads into the dining room for brunch. We arrived promptly at 11am and, shortly thereafter, gluttonous husband had a very fine Bloody Mary, while Greedy Girl chose the ‘French 75’ cocktail – champagne, lemon juice, citadelle (a type of French artisanal gin) and simple syrup. It was very tangy and, after the initial shock wore off from the lemon, quite nice. Greedy Girl had read previous blog posts that indicated a Cosmopolitan was available. Sadly, that’s no longer the case but it’s probably just as well … 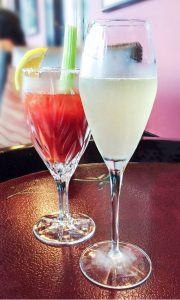 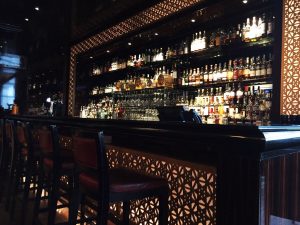 There were also some canapés which were left on the bar rather than being passed around the tables. We snacked on (from left to right) egg mayonnaise with truffle, smoked salmon rolls and dabs of foie gras mousse. Delish. 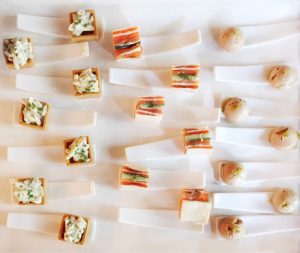 When the clock struck 12, we moved into the dining room at Brasserie Les Saveurs. We were originally shown to a table in the middle of the room but after a large group was seated next to us, we asked to move next to the windows overlooking the pool – we also had a partition which made the spot a bit quieter. All good.

There are only a few stations set up, with the rest of the dishes passed around by chefs. You also select a main course from a small menu. The stations are what you’d expect – seafood, sushi and sashimi, salads, charcuterie, a carvery and a dessert and cheese selection.

And so we settled in, taking the option of the R de Ruinart Brut NV champagne at S$195++ per person – this includes a selection of red and white wines, beers, soft drinks, coffee and tea. You can also choose Krug Grand Cuvee free-flow at an eye-watering $395++ … perhaps another time, after we’ve won the lottery. 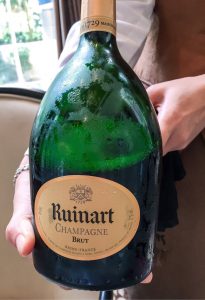 Gluttonous husband made a beeline for the oysters – some very delectable Claire de Fine from France. He was a very happy chappy. 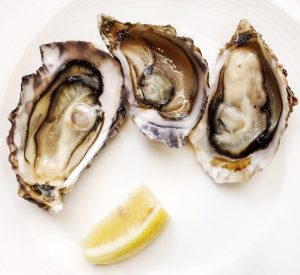 Greedy Girl started with sushi rolls and some salmon and yellowfin tuna sashimi. The rolls in particular were delicious and a good foil for the booze. 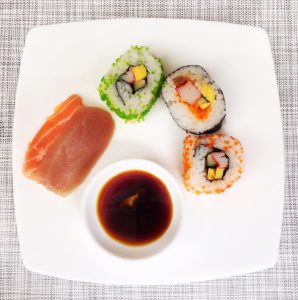 The first of the ‘pass around’ dishes was a crepe topped with some crumbled boiled egg and caviar. Apart from the crepe falling apart in one’s hand it was quite nice. 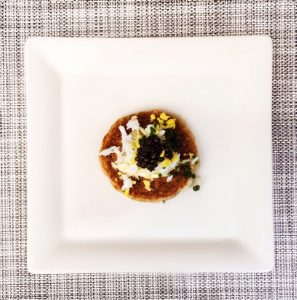 This was shortly followed by the truffle bread, served with a choice of seaweed butter or salted butter. There was no aroma of truffle and not much flavour of it either, so a bit of a disappointment. 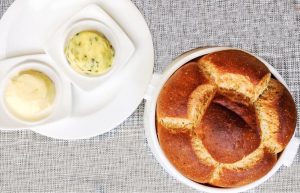 The next element brought to the table was a stand containing various little tastes. The menu said it was a three-tiered stand, but as you can see from the picture below, we had two. On the top layer we had another egg mayonnaise mini-slider and a very nice mushroom tart with a dot of foie gras mousse. Underneath was a red onion tartlet (the oblong shaped pastry case you can see below), a smoked salmon roll and a little mixed vegetable salad. 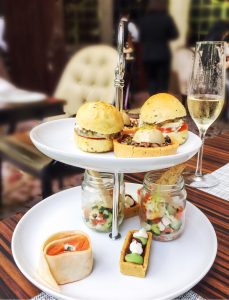 From there it was a few more trips to get more oysters and sushi, as we continued to sip the very fine champagne. The wait staff were quite attentive and we were relaxed and content.

The next pass around plate was a tuna confit with some caviar, on top of a tomato relish. Greedy Girl quite liked this, although gluttonous husband said he didn’t find much to rave about. 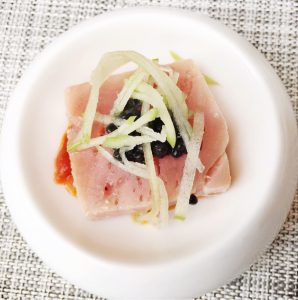 This was followed by a carpaccio of scallop – again, quite edible, if not particularly memorable. 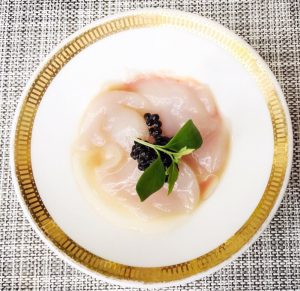 Next up, we were served lobster thermidor. Generally we steer away from lobster at brunches, finding it dry and tough but this was very good – soft and full of flavour. 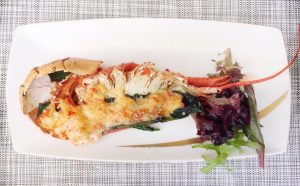 At this point, we were invited to watch a St Regis tradition – the sabreing of a bottle of champagne, which is supposed to mark the official start of the champagne Sunday brunch. This happened more than an hour after the start of proceedings and, despite requests for him to turn around where most people were gathered (phones at the ready) he opted to face the other way. Ah well … 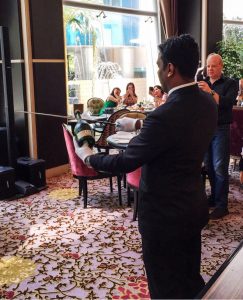 Sabre to you too, fella …

It was time for main courses. Gluttonous husband had the dish at the top of this post, cod with black mussels, spinach and pernod and saffron emulsion. While the fish skin came out rather black, it was crispy and the flesh below remained soft. We were concerned it would be dry, but the chef did us proud.

Greedy Girl took duck – pan-roasted with a chestnut mousseline, garlic sauteed broccolini and sauce a l’orange. The duck was quite tasty but the fat hadn’t been rendered down. She also couldn’t taste the sauce. 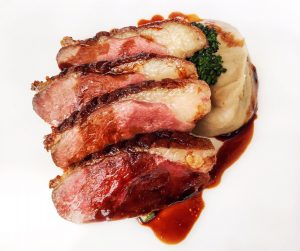 At this point, the last of the pass around dishes arrived at our table – a tiny croissant with a slice of black truffle and scrambled egg. 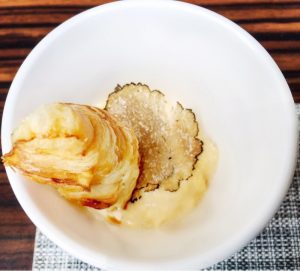 We wanted to try the beef wellington from the carvery but when we arrived at that cooking station there wasn’t any left. No problem, said the chef, another would be out in five minutes.

So we went back to the table, sipped our champagne and waited – and waited. No beef wellington in sight and no more champagne – with an hour of advertised service still to come. Gluttonous husband decided the squeaky wheel gets the grease and went back to the carvery. When nothing was forthcoming, he made his feelings known to the restaurant manager. Suddenly, we were told we’d get plates delivered to our table.

But then, it was still a struggle to get champagne. A bottle was eventually produced from a serving area but the champagne was warm. Not a good look. Again, we needed to make our feelings known to get any action. The manager came back with a bottle in an ice bucket for us – but all that took around 25 minutes, not a good look for a five-star establishment.

Still, the beef wellington was nicely prepared and served with a range of accompaniments, including béarnaise sauce, Yorkshire puddings and some bizarre little churros. We left those on the plate. 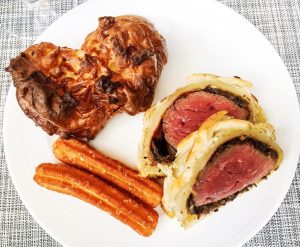 From there, Greedy Girl hit the dessert selection and came back with a few different chocolate offerings. The chocolate pudding was, oddly, served in a big tub and diners had to take a ladleful for their own plates – not outrageously attractive. Still, each of these were quite nice. 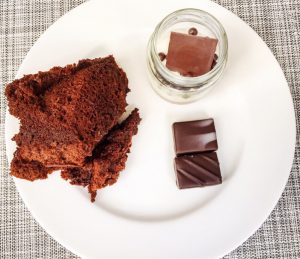 Gluttonous husband helped himself to a selection of delightfully stinky French cheese and walnut bread. He was a happy camper. 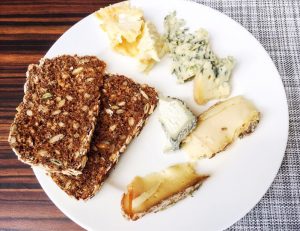 And we finished with two decent double espressos. 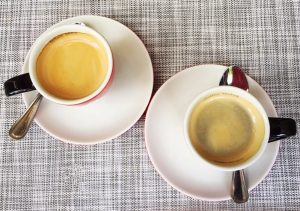 And we were done. We settled the bill (which included a 10% discount for SPG members – however long that lasts when the loyalty programs merge) and headed out into the fierce afternoon sun.

Apart from the snafu about missing out on a chunk of service for champagne, this was a pleasant experience and one we’d probably repeat at some point. The room is comfortable and entertainment is provided by a good ‘jazz’ band, so the atmosphere is also very good. For a Sunday champagne brunch in Singapore, you could do a lot worse. 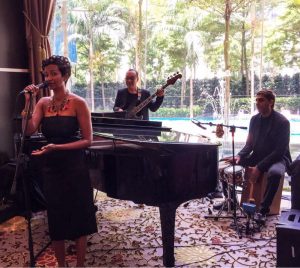