High-end Cantonese food in Singapore – Golden Peony at the Conrad

Of all the various Chinese cuisines, there’s nothing like the variety and flavour of Cantonese dishes. It’s what Greedy Girl grew up with, Melbourne being dominated by Cantonese eateries. As part of a special deal recently we headed to Golden Peony at the Conrad in Singapore for some high-end Cantonese cooking.

We love refined Chinese dishes, heading to Melbourne’s famed Flower Drum twice a year for a feast. This was also in banquet style, with a set menu as part of a Luxury Escapes deal. We opted to add a steak dish for a small supplement.

On the third level of the Conrad Centennial hotel in Singapore, down in the Marina area of this amazing city, Golden Peony is an elegant restaurant, fitted out in traditional Chinese-luxe style but without the huge expanses of crystal. Relatively speaking it’s a bit understated and very comfortable.

A group of six, we settled around the table, ordered a very decent Suckfizzle Sauvignong Blanc Semillon from Margaret River in Western Australia and some Jasmine tea.

And then it was just a matter of diving into some beautifully-presented dishes. First up was possibly the most attractive Peking duck we’ve ever seen. 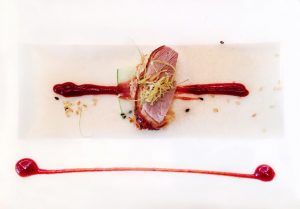 This is served with crispy beancurd skin on a homemade crepe. It seemed a shame to disturb it, but disturb it we did, wrapping up the morsel of soft duck and mopping up the slick of hoisin sauce. Delish.

Next was baked silver perch with a red wine sauce.

The fish was cooked brilliantly and the red wine sauce an unusual combination but it worked. Down the hatch.

This was followed by the dish pictured at the top of this post, expertly pan-fried scallops with asparagus and fresh mushroom – plus some red capsicum. While Greedy Girl left the capsicum behind, there’s no doubt it was a vibrant-looking dish and very tasty.

We opted to add a final savoury course – pan-fried beef tenderloin with a black pepper sauce. The pepper was just spicy enough although some at the table would have preferred a hotter hit. Still, it was luscious – tender and full of flavour. Yum. 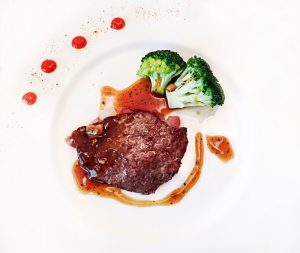 With this, we chowed into some excellent fried rice, also given a twist. This was infused with crabmeat, conpoy (dried scallop) and topped with fish roe. 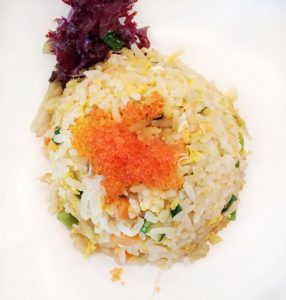 It was time for some dessert. Generally Greedy Girl isn’t an enormous fan of Chinese desserts but this was actually pretty good – a golden-fried egg souffle with red bean paste and ice-cream. 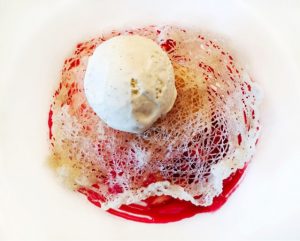 The spun sugar looked pretty and, miraculously, didn’t make the dish too sweet. A great way to finish.

In a city like Singapore, especially when it comes to Chinese food, it was great to see the effort put into these dishes. It’s probably essential to try to do something different to be able to attract diners into the big hotels, when they have so much competition.

Golden Peony is rated by the Michelin guide as a worthwhile stop. And it is!