When it comes to fine dining in San Sebastian, you’re literally spoilt for choice.

But Arzak, about 40 minutes’ walk (yes, walk … more on that later) from the Playa de la Concha at the heart of this Basque city, sets itself apart in a great many ways.

We presented ourselves promptly at 1.15pm for the start of lunch service, having had a pleasant and relatively easy walk from the beach. We knew we were in for a feast and decided to consume as many kilojoules as possible before we arrived.

It worked; we were both ravenous when we found ourselves at the doorway of, let’s face it, a rather different-looking building on a slight hill in the northern part of the city.

The building has a very distinctive facade with a diamond pattern and, according to the restaurant website, it was built for chef Juan Mari Arzak’s grandfather in the late 1800s. Inside though, it’s sleek and modern.

Shown to a table upstairs, we initially believed we were in the non-Spanish section – for the majority of the lunch service English was spoken almost exclusively in the room before some locals turned up later. Of course they did; lunch and dinner in Spain are generally not taken all that early in the day. But I digress.

We’ve learned also in Spain that there’s no list for wines by the glass. You can nominate a style and you leave the rest up to the sommelier. We opted for a glass of a fine Cava, while gluttonous husband requested his usual IPA.

Well, that furrowed our waiter’s brow. He said he’d never heard of such a thing but thought he could provide ‘a craft beer’. Minutes later the Basque IPA enjoyed several times throughout this trip appeared on the table. Apparently this was the first time in the waiter’s 10-month career with Arzak that anyone had actually asked for an IPA. Go figure.

Arzak offers enormous flexibility with its offering. You can choose a la carte, or a tasting menu which, in itself has a number of choices – some of which are not displayed on the menu, but described by our delightful head food waiter, Adolfo.

While we both took the tasting menu, around us it became clear that not all people dining together need to do the same thing. One could do the degustation while others could order as many or few courses as they liked from the a la carte list.

We were also assured – a number of times – that if we didn’t like anything it would be removed and replaced immediately. So there you go – a fine dining first guarantee that you’ll love it, or they’ll find something you will enjoy.

Dietary requirements are obviously taken quite seriously here. Greedy Girl’s legendary dislike of beetroot came to the fore because quite a few dishes used beetroot, particularly for its colouring. Still, the kitchen was more than up to the challenge.

And so we got into the food. First up you get a number of amuse bouches. 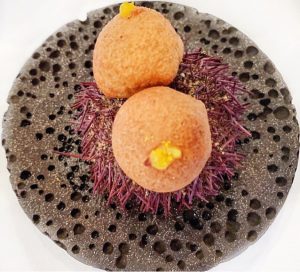 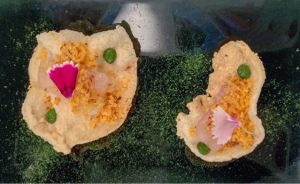 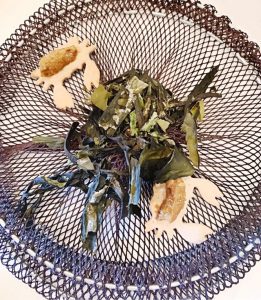 So these all easily went down the hatch. The ‘fortunate fish’ tasted more like pate but the crumb was absolutely sensational. The sea urchin orbs were quite tasty but gluttonous husband said afterwards he’s still yet to be convinced in terms of what the fuss is about the ingredient.

The corn tortillas were a nice flavour but perhaps not as crunchy as Greedy Girl expected, while the ‘karramarros’ were essentially a crab paste.

But the first test of ‘love it or we’ll give you something else’ came with the anchovies. Greedy Girl enjoys them melted in sauces but doesn’t relish them any other time and this was no exception. It did taste citrusy but she immediately handed it over to gluttonous husband to finish.

And the waiter was immediately at her elbow. “Would you like something else,” he enquired. Impressive. Greedy Girl should have taken up the offer to see what else came out. Darn. A note for next time.

We were then into the main dishes of the tasting menu with Greedy Girl and gluttonous husband taking different plates for the most part.

First up gluttonous husband had the fish of the day – mackerel macerated in ‘shio koji’ (malted rice, salt and water) with sea grapes and ‘piparras’ which are semi-sweet Basque peppers. He loved the combination. 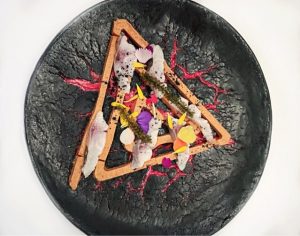 An amazingly presented plate was put before Greedy Girl. 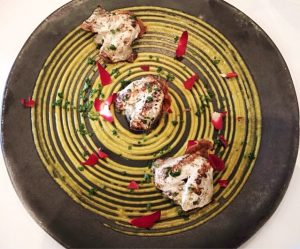 The hake chin is grilled and served atop a turmeric and coconut spiral with squid crisps. Delish.

Greedy Girl’s next dish was lobster with banana and leek. 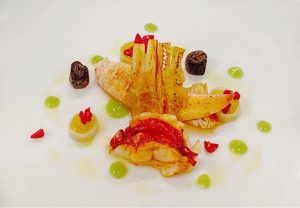 Another spectacular combination, the claw meat from the lobster was particularly delicious.

Gluttonous husband took scarlet prawns with krill – the prawns having been coloured with beetroot. The krill crisp on top was from Antarctica. We joked that someone had travelled further than us to get to the restaurant.

We both had the same dish next. The famed ‘Arzak egg’ cooked at 65 degrees for 20 minutes and then flash fried, served with ‘pozole’ which is a traditional stew (in this case dominated by corn and porcini mushroom) and tomato gummies. 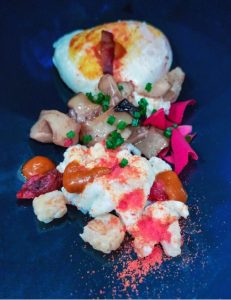 OMG. This is seriously good. The slightly crispy coating on the egg was amazing. Every last bit was mopped up.

For Greedy Girl, next up was dark monkfish. The menu describes this as a representation of the dark bottom of the sea, using two of the chefs’ favourite products – black monkfish and beans. 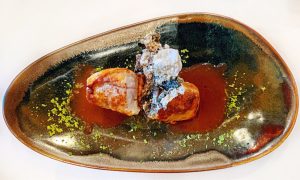 ‘The dark bottom of the sea’

This was another unqualified yum. The softness of the fish and the depth of the black bean sauce was absolutely incredible. Greedy Girl didn’t want to share but did offer gluttonous husband a taste.

His fish dish was grouper, served with its own collagen. Perhaps not the most enticing of descriptions but certainly delicious. 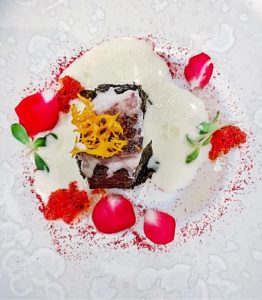 Grouper with its own collagen

For the meat course, there were a number of options, but Greedy Girl was never going past the foie gras, pictured at the top of this post.

Another OMG. The duck liver was dusted with kimchi powder and served with white mulberries. Sensational. 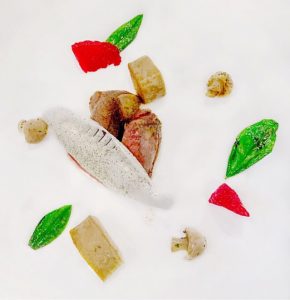 Pigeon pretty as a picture

Basically this is served with ‘elements from the forest’. Gluttonous husband described it as by far the best pigeon dish he’s ever had. It was certainly very, very red but incredibly tender. The other ‘chunky’ elements on the plate we thought looked like potato but they were soft and made from mushroom. Delish.

It was time for a palate cleanser. We’d chosen a different one each. Greedy Girl had one made from Mezcal (tequila!). It was described as ‘frost and snow’ and served with almond praline and fluffy raspberries. 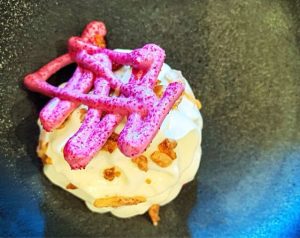 Again, this was stunning. The praline gave a little crunch and the ‘fluffy’ raspberries were also like a crisp. 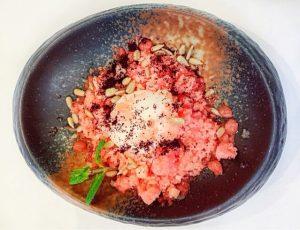 That was enough sweetness for him. Instead of dessert, he requested a cheese plate. 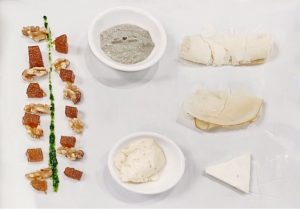 An amazing variety and, sadly, Greedy Girl doesn’t know enough about Spanish cheeses to be able to give detail, suffice to say there was a reasonably mild goats’ cheese (bottom right) and the middle right was quite smoky. In the dishes top and bottom were much more, ahem, powerful offerings. Gluttonous husband was a happy chappy.

Greedy Girl took the ‘big truffle’. This comes to the table as a rather large ‘rock’ and chocolate sauce is poured over the top to make it start to disintegrate. 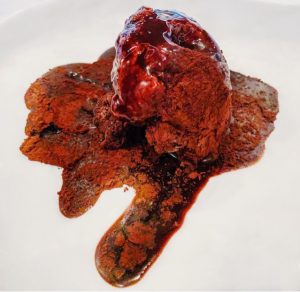 Essentially it’s  a cocoa and sugar shell filled with creamy chocolate and carob. And rather lovely it was too. On the side you’re given a small dish of ice-cream. Given it was coffee, it went over to gluttonous husband. 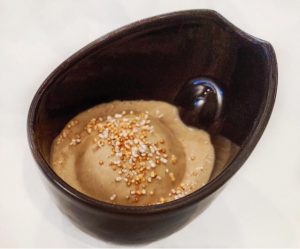 And finally we were given a plate of petits-fours – splendidly presented. 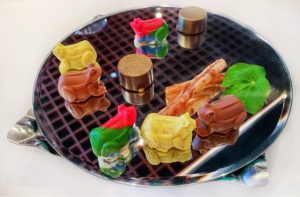 And we were done. We’d had a couple of glasses of Spanish wine throughout, a Lagar de Cerveza Albarino, Allende Rioja Bianco (yes Rioja can be a white as well) and finished with a red, Aster Finca El Otero. All were excellent accompaniments.

During the course of the afternoon, we were visited by both Elena and Juan Mari Arzak. Elena’s English is impeccable and she was happy to stand and chat to us about her visits to Sydney and Melbourne. Juan Mari, her father and a pioneer of fine dining in San Sebastian, stopped by briefly but seemed happy to have guests from Australia.

Arzak was ranked 31 on the last list of the World’s 50 Best Restaurants and while other establishments in San Sebastian are listed higher, this was first choice on Greedy Girl’s list just for the sheer charm and enjoyment factor.

If you love to invest in fine dining, it’s worth every penny of the A$900 it cost for two and the best possible reason to visit San Sebastian. We consider it the best meal we’ve had since Massimo Bottura’s famed Osteria Francescana.