In one of the older shopfronts on the venerable Oxford Street strip, Fred’s is a vibrant addition to the Sydney scene.

Part of the Merivale hospitality empire, this is a large restaurant. There’s a bar area with table seating at the front which looks perfectly pleasant (if somewhat unremarkable), but we’re quickly directed towards the back of the establishment.

And there’s the wow-factor. A light and airy room with soaring ceilings, dominated on one side by the open kitchen and three very large open cooking stations. At the centre is chef Danielle Alvarez who directs a female-dominated team (well, at least on the day we’re there) presiding over the pots.

Alvarez is US born with Cuban heritage and has an amazing culinary pedigree. She trained at Thomas Keller’s The French Laundry and worked for another highly-regarded American chef Alice Waters, at Chez Panisse, also in California.

The food is slightly on the rustic side but there is plenty of skill evident in the extraordinarily tasty plates of food.

We took a table down the back of the restaurant, just next to an ante-room which would be a good spot for a small group. Gluttonous husband settled in with a Yulli’s Amanda Mandarin IPA (with an amazing citrus bouquet), while Greedy Girl helped herself to a glass of an interesting blend – Pinot Gris, Riesling and Gewurztraminer – from Victoria’s King Valley called ‘Pret a blanc’ by Schmolzer and Brown.

Ordering dishes to share, we were shortly presented with the amuse bouche. 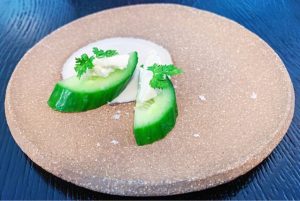 This is possibly as understated as it gets, but it was very fresh, crunchy and tasty. We were primed.

First up was a scallop tartare. 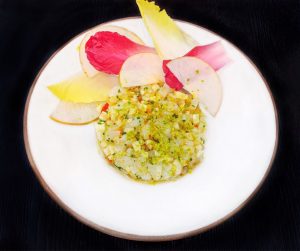 This very pretty plate of food was also quite yummy. The scallop tartare was complemented by salted chilli, orange, pistachio and nashi pear, with a few leaves of bitter radicchio thrown in.

The flavours are spectacular but we were glad to share the dish, figuring it was quite a large serve for one person.

Next up was a terrine. 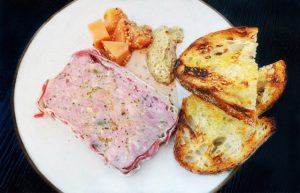 The pork and duck liver terrine had great texture. It was served with a quince ‘mostarda’ (essentially candied fruit with a mustard syrup – an Italian recipe), a quenelle of very good seeded mustard and some grilled bread. Again, quite delish.

Greedy Girl was in the mood for carbs, so she took the seafood fettucine. 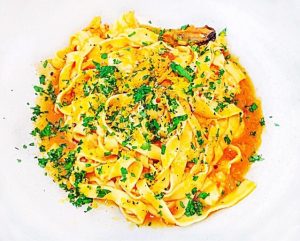 A light tomato sauce accompanied fresh mussels, fish and prawns, along with gremolata and bottarga (salted and cured fish roe). The latter gave the dish more depth of flavour and, all told, it was one of the better pastas Greedy Girl has eaten out in recent times. 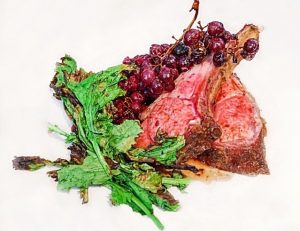 We’d watched this cooking on the open flames and it looked rather good. The cutlets presented were a tad on the rare side, but gluttonous husband had no issue with that. He weighed in.

The dish was served with cime di rapa, fennel seed and rosemary and wine grapes. Gluttonous husband enjoyed the flavour of the grapes but kept getting annoyed at the tiny pips in them. C’est la vie.

As a side, we opted for the wood oven-roasted potatoes. 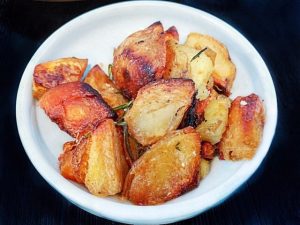 These were simply dressed with rosemary, thyme and salt. We added a bit more salt. Still, they were crunchy on the outside and fluffy on the inside. Couldn’t really ask for more.

We decided to try dessert. 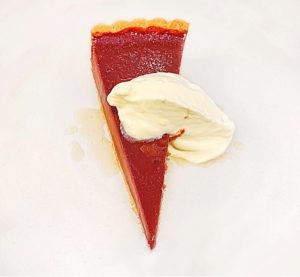 Not expecting a huge dollop of cream on the top (which Greedy Girl delicately scraped off), this was a stunning soft chocolate tart with buttery, slightly crumbly pastry. The little golden drizzle you can see on the side is burnt honey.

Greedy Girl’s not generally a fan of honey but she could have done with more of this on the plate. It was a great combo.

And we were done.

This is a very enjoyable way to spend a lunch. The restaurant is busy and buzzy but not ear-achingly noisy.

We enjoyed the experience and if we’d had the same server throughout would have rated the restaurant even higher. When she took a break, we became the invisible table, which was slightly irritating.

Having said that, we’d be more than happy to try more of this chef’s food, including her very reasonable tasting menu, on a future visit. 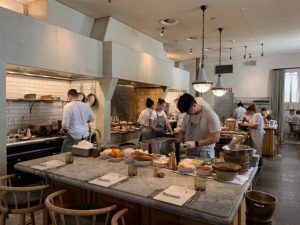