It’s one of the toughest reservations in the foodie world to get. Greedy Girl and gluttonous husband were delighted, thanks to the relentless efforts on speed dial of a San Francisco-based friend, to get a lunchtime table at The French Laundry, a temple of gastronomy.

Helmed by chef Thomas Keller, who has a significant influence on the town of Yountville, just north of ‘downtown’ Napa, The French Laundry is about to celebrate 20 years of operation. At one point it was the top-rated restaurant in the world. In the last San Pellegrino list, it was still ranked in the world’s top 50, coming in at #44 – rising three places from the year before. Keller also has a number of other outlets in the town – Ad Hoc, Bouchon and the Bouchon Bakery where gluttonous husband queued up on another occasion to get the chance to purchase a croissant and a pain aux raisins, but I digress.

While Per Se, at NYC’s Columbus Circle has taken the gastronomic honours (in terms of world rankings) in recent years, The French Laundry has remained a foodie mecca. It’s not the biggest restaurant (and that explains why it’s so hard to get a table) and there’s almost as many staff as patrons. The menus are very similar to Per Se and include a host of Keller’s signature dishes.

The restaurant stands on the site of one of the earliest buildings in the area. The room in which Greedy Girl and gluttonous husband very excitedly sat down for lunch still has part of the original stone wall built in 1893. The peg motif (laundry … get it?) is featured everywhere (see the picture, above).

Settling in with a bottle of 2004 Champagne Henri Goutorbe from Ay (apparently it was a champagne that required agreement from 26 different French champagne producers to see the light) we snacked on the same amuse bouches as Per Se, the smoked salmon and creme fraiche ‘ice cream cones’ (the cone is a black sesame tuille) and the cheese gougeres. The gougeres, in particular, tasted so much better than at Per Se; we greedily gulped them down with the first sips of champagne. It was time then to consume some of the exceptional bread, which was served with a choice of butters. One of the butters was called ‘Animal Farm’. Greedy Girl’s interest was piqued; apparently it comes from an artisan maker in, you guessed it, Orwell, Vermont. Nice. 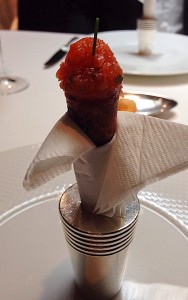 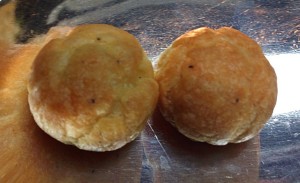 The first course was a Keller signature, oysters and pearls. We’d also had these butter-poached Island Creek oysters and white sturgeon caviar at Per Se; here the pearl tapioca sabayon seemed thicker. It was, once again, a delicious start. 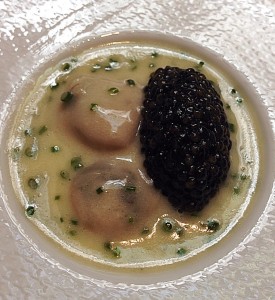 The famous oysters and pearls

Next up, for gluttonous husband, were Hawaiian hearts of palm. This was different from the dish at Per Se. Hearts of peach palm were served with white asparagus, green tomatoes, compressed cucumbers and ‘petite’ basil. 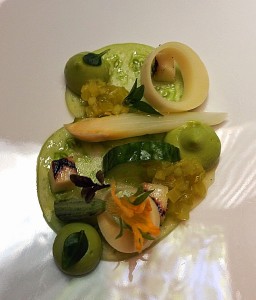 Greedy Girl chose a supplementary item, which cost an extra US$100 – mac and cheese. Yep. Mac and cheese – strewn liberally with shavings of Australian winter black truffle. Greedy Girl commented she’d come a long way to eat Australian truffles but when they taste this good, who cares? She wishes she’d got a before shot; the combination of the ‘hand-cut’ macaroni, parmigiano reggiano, squash blossoms and crunchy ris de veau (veal sweetbreads) was very pretty. The dish was placed before her and then a box containing the truffles was presented. 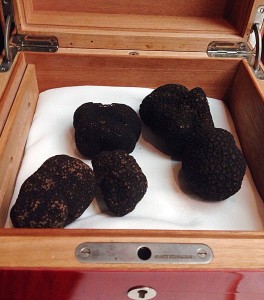 Her request to ‘leave the box’ went unheeded, but a very generous shaving of these nuggets of black gold soon covered the dish. OMG. This was heaven on a plate. The pasta and cheese were spectacular and the crunch from the fried sweetbreads was divine. And the truffles. Mmmm, truffles, drool … It may be incredibly hedonistic to spend an extra $100 on a dish but Greedy Girl was a very satisfied customer. It goes close to being the very best plate of food – ever. 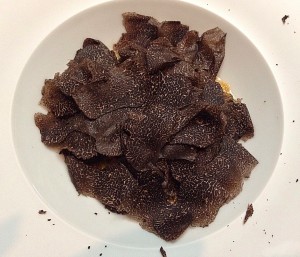 There’s Mac and cheese under there somewhere

So, of course, it was all down hill from then on. Just kidding. Next up was a sauteed fillet of Pacific sablefish. This was served, for Greedy Girl, minus the advertised beets; she got a sliver of very soft potato instead, which was eagerly mopped up along with the dill cream and ‘mustard frills’. Delish. 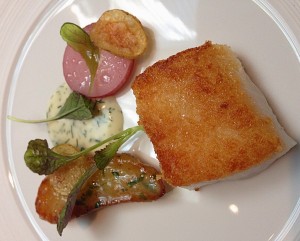 We then moved to a sweet butter-poached Maine lobster. Again, this was a variant of the dish presented at Per Se which, there, was probably the course of the evening. It was an incredibly pretty plate of food. The lobster claws sat on top of a bed of Brentwood corn, a couple of chanterelle mushrooms and a watercress and chanterelle mushroom veloute, with a ‘Brooks’ cherry on the side. All of these components were sensational but Greedy Girl and gluttonous husband agreed that they were delicious in isolation rather than as a complete dish. The veloute was stunning, the lobster perfectly poached, the cherry was a lovely touch. We just didn’t want to eat them together. 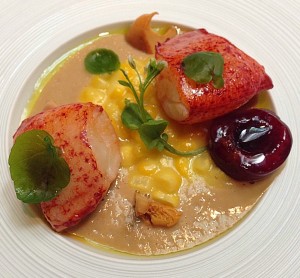 It was time to move to the meat courses and we left the champagne on ice to have a glass of red each. Greedy Girl chose a Sandhi pinot noir from the Santa Rita Hills (down near Santa Barbara, she was told), while gluttonous husband had a local Hudson Vineyard Failla syrah.

Our first meat course was rabbit. Normally, Greedy Girl wouldn’t get anywhere near a bunny but she decided to give this course a try. This was a ‘Devil’s Gulch ranch rabbit’ served on soffrito-braised Romano beans, a black olive puree, garlic ‘scapes’ (stalks of a particular non-flowering garlic plant) and arugula. It was incredibly soft; the white flesh was combined with what almost tasted like a stuffing. It was a very tasty, very tender dish. 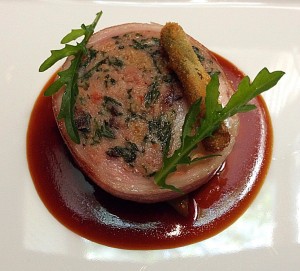 Next up was lamb. This was herb-roasted ‘Elysian Fields’ farm lamb served with a cauliflower puree, ‘Royal Blenheim’ apricot, young fennel and a Marcona almond jus (plus an almond on top of the apricot). It was a very strong-tasting lamb – a bit too ‘gamey’ for Greedy Girl and a tad undercooked for her liking. Gluttonous husband was very happy to eat the majority of her dish as well, pronouncing it soft and full of flavour. 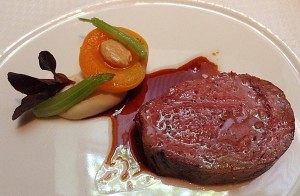 It was time for the cheese course. Springvale Farms ‘landaff’ (made in the White Mountains of New Hampshire in a Welsh style) is a raw milk cow’s cheese. It was served with medjool dates (the circle on top of the cheese) an English walnut beignet, red endive and a couple of extra walnuts on the plate. The cheese had a lovely tang and went spectacularly well with the walnuts and dates. Yum. 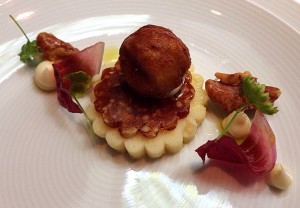 Next up was the avalanche of sweets. First was ‘fruit’. This was described, economically, as peaches and cream. It was an incredibly light panna cotta topped with a thin jelly coating, fresh peach and a crunchy biscuit – a very light shortbread. Delish. 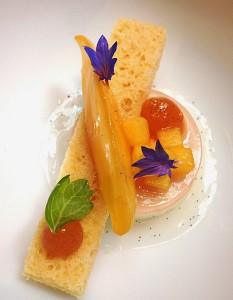 Second up was ‘ice-cream’. Very rich (gluttonous husband described as luscious) vanilla ice cream sat on top of a mix of Marcona almond crumbs and Silverado strawberries. While Greedy Girl helped herself to the latter items, the ice-cream went over to gluttonous husband, who accepted it gratefully. We heard the waiter tell diners next to us that the plates had been created to mimic the shape of the quenelle of ice-cream. 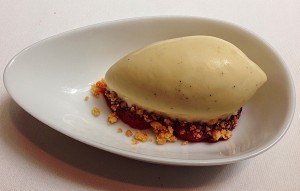 The ‘final’ dessert was chocolate. This was a chocolate and hazelnut tart served on a slick of dulce de leche. Greedy Girl really enjoyed this.

We were both fit to burst, but there were more sweet treats to come. Being lunchtime we sipped on espresso coffees and chose some selections from the chocolate box. Our selections included salted caramel, hazelnut, ‘Smores, yuzu, rum and raisin and peanut butter and jelly. 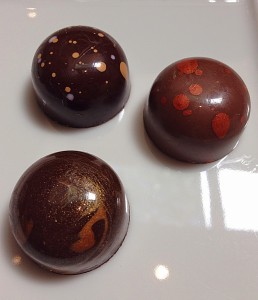 From the chocolate box 1 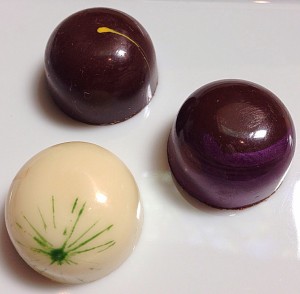 From the chocolate box 2

We were also treated to the signature doughnuts, macarons and some wonderful cocoa-covered macadamia nuts. Gluttonous husband also had the cappucino ice-cream but Greedy Girl demurred. 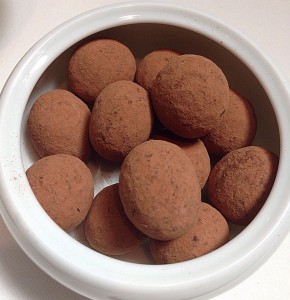 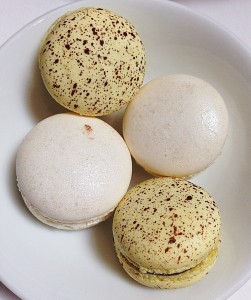 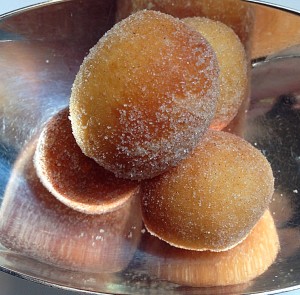 Groaning, we waddled to the door and out into the Napa heat. Unsurprisingly, we didn’t eat again for the rest of the day.

The French Laundry is, without doubt, a special occasion treat. It’s extremely accomplished cooking which probably would have had more of an impact on us had we not been to Per Se just three weeks earlier, but definitely an experience to savour.