Where to eat in Osaka – La Cime

Fusion food means many things but the combination of French techniques and Japanese ingredients has a lot to recommend it. When researching where to eat in Osaka, La Cime represents an intriguing option.

Chef Yusuke Takada presides here over a very small and almost austere dining room. Having trained with some of the leading lights of fine dining in Paris, it’s no surprise that his food is elegant and refined.

And so, promptly at 12 noon, we presented ourselves at a chic shopfront in Osaka’s Hommachi district. The dining room is painted white with only one painting on the wall nearest the kitchen. During our visit it was set up for just 12 people.

At lunch, you can choose from a menu of nine or 12 courses. We opted for nine which gives you three amuse bouche, three hors d’oeuvres, a meat dish, pre-dessert and dessert – followed by tea and petits-fours.  Currently that’s 8,500 Yen plus tax – and you pay that in advance at the time of reservation.

Some might find pre-payment a little confronting but it’s becoming much more common. When you consider how small this restaurant is, the cost of no-shows would be ruinous. All good from our perspective.

Another surprise is the inability to buy a bottle of wine. Wines are all ordered by the glass and you can purchase a pairing on the day for 6,500 Yen. We settled on a glass of a delightful Philliponat champagne and a Japanese craft dark beer. Sorted.

And so we settled in. It wasn’t long before the first of the three amuse bouche hit the table, and a dish the chef is noted for – Boudin Dog. 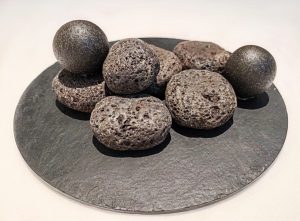 These black-0n-black orbs contain Boudin sausage (made from pork and pig blood), encased in a thin bamboo charcoal shell. It’s quite a strong flavour but delicious.

Next up was trout. 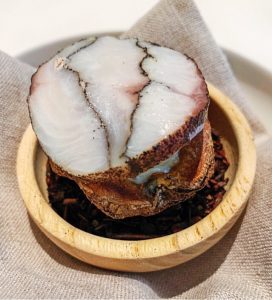 Nestled beneath the disk of trout are a few gnocchi flavoured with trout roe. The fish was very soft and pulled apart easily. It was a nice dish.

Next up we savoured little puffs flavoured with Jerusalem artichoke and cheese from Kumamoto. These were incredibly soft – with more a texture of marshmallow. 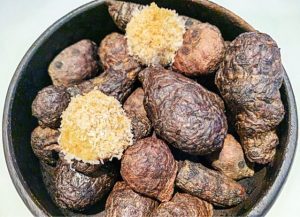 On to the hors d’oeuvres … first up was a steamed egg flan with peas, green vegetable soup and canola flowers. 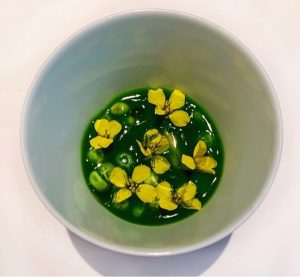 A pretty-looking thing, the peas were quite firm and contrasted well with the soft egg custard underneath.

Next was a yellowtail tartare with a fennel sauce and crispy saltwort – it looks like seaweed but it’s a plant that grows in salty marshes. 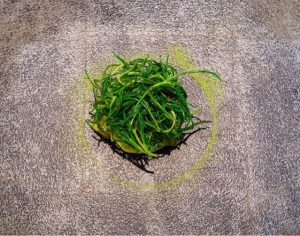 This was sublime … the fish was perfect and the fennel gave it a lovely edge. The saltwort was a great texture. Delish.

It was followed by the dish at the top of this post – two types of bamboo shoots with a leaf-wrapped mousse and a watercress soup. Now the menu you’re given at the end of proceedings described the mousse as sole, but we could have sworn the waitress said prawn. The interior of the little green bundles you can see in the picture was decidedly coral-coloured. Whatever, it was quite yummy.

Next up is a dish called ‘Higedara’, which we were told was similar to cod. 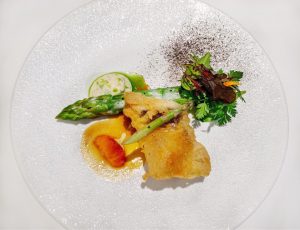 The fish is coated in a light, crunchy batter and served with two sauces – one made from prawn shells and another from cheese. It’s served with a giant asparagus spear and a sprinkling of ‘asparagus ash’.

This was a dish of two halves; the fish and prawn sauce went together a treat, while the asparagus with the cheese sauce was also nice.

Our ‘meat course’ was roast chicken breast and leg from Kagoshima, apparently near the chef’s hometown in southern Japan. This was served with crispy wild garlic and spring onions. The white foam you can see below is made from bacon. Perfectly delectable. 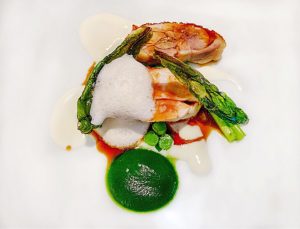 And before we knew it, we were on to the pre-dessert. 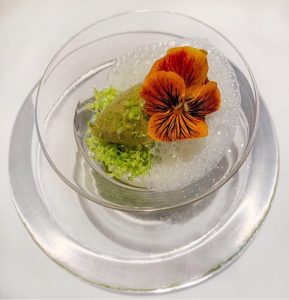 The foam is the rose flavour, with a quenelle of pistachio ice cream. Down below is a kiwifruit mousse. Taken all together, it was certainly refreshing.

Dessert proper was out there – mirin ice cream with rice puffs, served with a ‘French toast’ on the side. 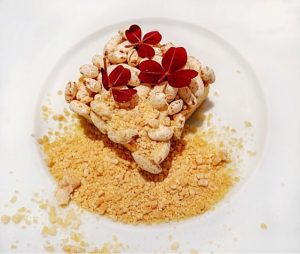 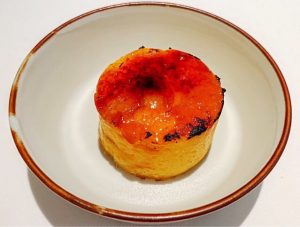 These were designed to be eaten together, so we took a spoonful of the first dish (which was bitingly cold) and then a bit of the hot ‘toast’ which was akin to a bread and butter pudding.

The mirin ice cream is an unusual flavour but it was a good dessert in that it didn’t taste overly sweet.

After that, we were invited to choose from a vast range of teas and given a dish of petits-fours. 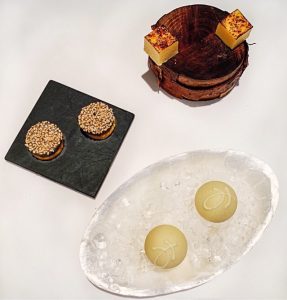 The white chocolate bonbons were filled with a liquid fruit centre, so they went down the hatch in one bite. The other offerings were tiny cubes of baked cheesecake and little sesame cakes.

And we were done. The pace was quite quick but we didn’t feel rushed. The wait staff had a small amount of English and the main waitress looking after us also kindly gave us recommendations for the best spots to sample some traditional Osaka delights.

La Cime came in at number 17 on this year’s list of Asia’s 50 Best Restaurants and it also has two Michelin stars. It’s inventive food and very enjoyable. Like most Japanese establishments though, you’d struggle here if you don’t eat fish.