Where to eat in San Sebastian – eMe Be Garrote

Basque chef Martin Berasategui holds more Michelin Stars than any other Spanish chef so when you’re looking where to eat in San Sebastian, one of his establishments is high on the list.

Given we were in San Sebastian on days his eponymous fine dining restaurant was closed, eMe Be (how the Spanish pronounce his initials) Garrote was an exciting prospect for lunch.

Armed with a GPS guide, we decided to walk from our hotel to the restaurant in the Ibaeta district of the city. It was a great workout – San Sebastian is a very hilly place. We traipsed up hill and down dale and arrived at the converted cider house with a hearty appetite.

Berasategui has held three Michelin Stars since 2001 for his main restaurant and 10 in total. eMe Be has been open since 2014 and won its first Michelin Star this year.

You need to do your research to find eMe Be – it’s definitely nowhere near the main tourist areas but, once you do, you’re in for a treat.

It’s a large room but tables are actually quite sparse. As you can see from the picture here, the room is dominated by old cider vats. 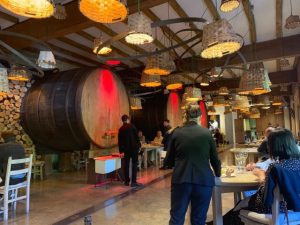 You might be able to see a large action shot of a golfer at the end of the room. This is Jose Maria Olazabal. Given the chef’s full name includes ‘Olazabal’ we wondered if there was any kinship … alas, we’re still wondering.

Lunch in Spanish restaurants starts around 1.30pm – rather late for the likes of Australian travellers, but we presented ourselves promptly and investigated the menu.

Another thing about Spanish restaurants is that there’s generally no list for wines available by the glass. One tells the sommelier what they like and a wine is suggested. As gluttonous husband tucked into a local Olaneta IPA, Greedy Girl opted for a verdejo – one of the chef’s own wine selections.

There are a couple of different tasting menus but we opted for our own plates and, having sorted the food, we tucked into some excellent bread with unusual but tasty olive oil spreads. At right (below) is the plain variety, while the one on the left was with mushroom. 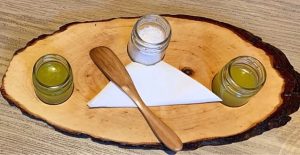 First up was an amuse bouche – a creamy, tangy sauce with a number of little treats floating in it, basically salad vegetables, which were quickly mopped up and a black pudding bon bon. Delish. 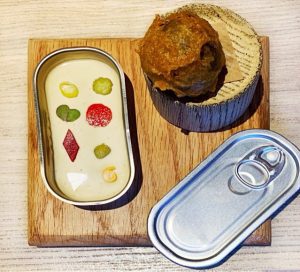 Greedy Girl opted to start with a beef tartare. 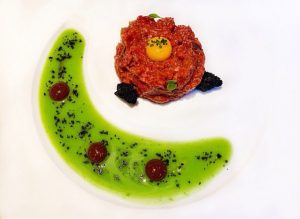 Tartare with ‘olives in textures’

Crisps for the tartare

The hand cut beef was beautifully soft and the perfect little quail’s yolk mixed through to add moisture. The olives floated in a sea of a slightly tangy olive oil concoction. It was wonderful and the little crisps were also delightful. 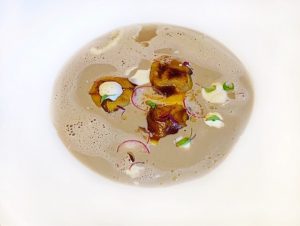 The soup is poured over at the table and Greedy Girl wasn’t quick enough to get a shot of the ‘before’, which was very pretty.

Greedy Girl’s main was the dish featured at the top of this post – sirloin with truffled potato cream and a tail broth reduction. She ordered it ‘medium rare’ and it came out almost mooing.

But such is the joy of a really, really good piece of meat. The flavour, even as rare as this, was spectacular. The only downside is that it was rather salty. She chose another of the chef’s selections to accompany it, a Rioja.

Gluttonous husband went for the monkfish. 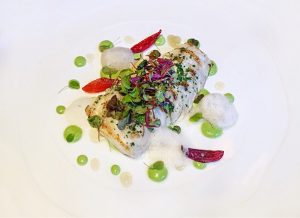 Another beautifully presented plate, the monkfish was a fraction overcooked but it was still a very good dish. Gluttonous husband exclaimed it almost tasted like he was eating crayfish, such was the amazing sauce he had with it.

And so, we moved to dessert. Gluttonous husband had a gigantic cheese plate full of hard and soft Spanish varieties. 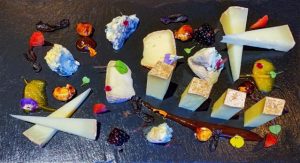 As a special treat, he took a glass of his all-time favourite dessert wine – a Pedro Ximenez sherry. This was black, sticky and amazing. 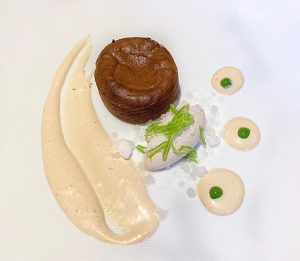 This was a wonderfully gooey fondant with hazelnut ice-cream, Frangelico slush and mint. The fondant was absolutely delish.

And we were done – heading off to retrace our steps traversing the countryside and working off some of the damage to our waistlines.

Berasategui is undoubtedly an incredibly talented chef. If we’d had the opportunity we would have relished a visit to his main restaurant but such is life. This is certainly a more approachable way to experience his food.