Seeing as our beer crawl turned up a few gems in Paris, we decided to check out craft beer in Barcelona.

The Catalan capital has a very laid back vibe, perfect for indulging in a few cold ones on a warm summer’s day – which is exactly what we found.

Our visit to Barcelona is very brief, so we’ll add to this post over time, as there’s no doubt we’ll be back.

And girls – if you were ever looking for single guys in a city, finding where the craft beers are dispensed is a very good start. #Justsayin’

This is a relatively new bar in Barcelona and a great find. We stumbled in one warm lunchtime and had the place to ourselves, save for a sales rep from one of the local brewers, Espiga.

In a corner of the room there’s a small case displaying jewellery. This is the bar owner’s initial career but she decided it wasn’t worth maintaining a bricks-and-mortar store given the trend to online shopping.

So she turned her passion for craft beer into a business and joined forces with her brother who loves to cook.

The set up is very similar to Garage (see below), with a large board over the taps serving up the beers du jour (or should that be del dia?). The selection is dominated by IPAs, but Greedy Girl was offered a taste of two ‘non-bitter’ beers that might suffice – a Berliner Weisse (peach) and an Espiga ‘Symbiose’. 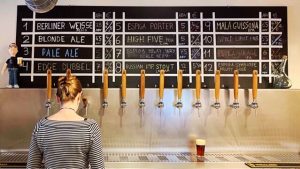 What’s on offer at Conesa

The rep for Espiga sitting at the bar said both beers were somewhat sour. He was right. Both were a firm no. Finally we settled on a Pale Ale from the UK. Not too shabby.

Gluttonous husband’s eye-opener was a Mala Guissona IPA, with an alcohol content of 6.5%.

Probably a good choice to start with, this was quite easy drinking, very light in style and a small bitter finish. 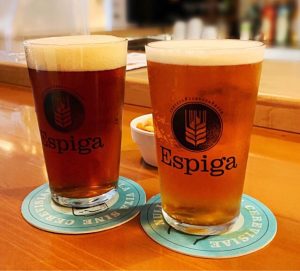 Next up he took the Garage (a different ‘Garage’ from the bar below) by Espiga. Initially he thought this was quite fruity from the aromas but the rep explained he was really getting a nose full of the hops. This also had a minimal bitter flavour. It was enjoyable but he wanted to move to something with a bit more oomph. 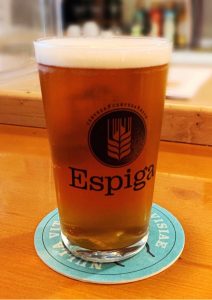 The owner suggested her favourite – the Espiga ‘Milky Way’ Double IPA in the New England style. This got a hearty thumbs up; gluttonous husband describing it as the best IPA he had in Barcelona. 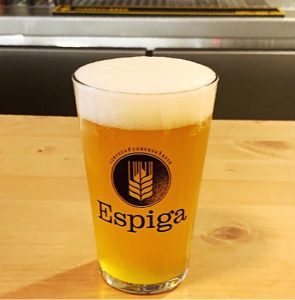 What better than the Milky Way?

It was quite a cloudy beer, with some complex flavours and a long bitter finish. All that and not a heavy beer to drink.

We took a few snack plates at lunch – some nice artichoke hearts served with jamon, a pork in beer sauce and some very light bread coated thinly with tomato. All delish and a good accompaniment to the beers. 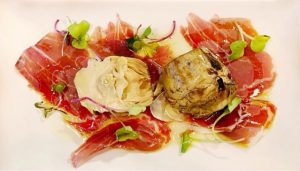 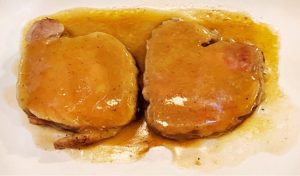 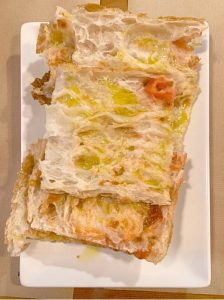 This is definitely a good option to put on your list for Barcelona.

There’s a decidedly American vibe to this bar, with signs almost exclusively in English and the walls dominated by US memorabilia. It looks and feels like a sports bar but the beer pedigree is very strong. 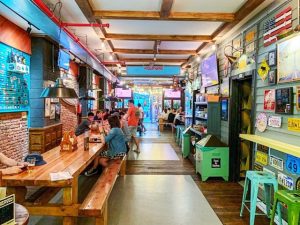 We tried three beers here – two IPAs and a ‘blonde’. The blonde was called ‘Voila’ from the Edge brewery in Barcelona. Very light and fresh on the palate and easy to drink.

The first IPA was called Hoptimista (also from Edge) which was done in the American style. It had a distinct aroma of stone fruit – the barman said it was cherry. It also had a bit of stone fruit flavour before the distinctive bitterness took over.

The second one (on our first visit) was a Te Deum IPA by ‘The Musketeers’ – a Belgian brewery. Gluttonous husband described this as ‘a bit light on’ – nowhere near the zing and enjoyment of the first one.

We headed back a little later for another go. This time we had the ‘white IPA’ from La Vella Caravana – another Spanish brewery about 2 hours’ drive inland from Barcelona.

Quite a cloudy beer, we chose it really for the name but it wasn’t anything really special. On that basis not a variety we’d go for again. 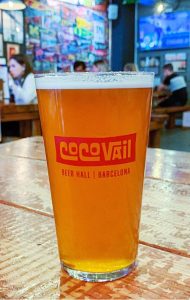 But anyway, the vibe, music and service here is brilliant and exceptionally knowledgeable. 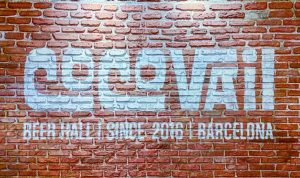 It pays to advertise

This was a recommendation from the guys at Cocovail. We headed in one lunchtime for a few snacks and a tempting selection of brews.

On the board behind the bar, there are 30 beers listed, dominated by IPAs and stouts.

Greedy Girl stuck to the lighter side of the scoresheet with a Pilsener, a Naparbier Paradise from Pamplona in Spain while gluttonous husband’s first IPA was an Amundsen ‘Chaos Theory’ from Norway.

The IPA was very light and easy to quaff down. Gluttonous husband had to restrain himself. 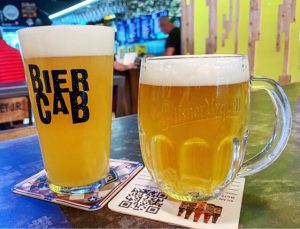 Being lunchtime, we decided to avail ourselves of some treats. First up was a complimentary snack of chorizo. 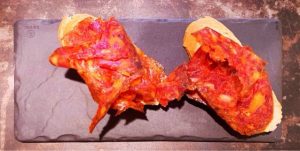 This was followed by a montadito of Iberico pork ‘feather’ with caramelised onions and cheese. It was tasty but very salty. Hmmm, salty food in a bar … whodathunkit? 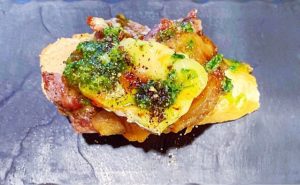 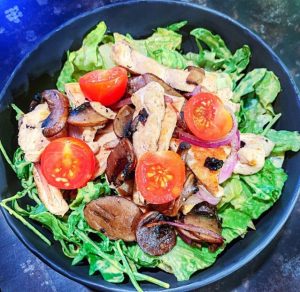 And finally it was the evocatively named ‘Crak’. This is done in the New England style by a brewery in Campodarsego, in the Veneto region of Italy. 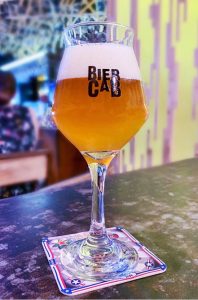 Possibly the most enjoyable beer of the sojourn to BierCaB. Nice robust flavour, quite bitter and a long finish.

Service here is great, although the barman’s English is a tiny bit hit and miss (we still got there), the food is very edible and the music great.

Light the beacons, Greedy Girl is no longer an IPA virgin. Heading to Garage Beer Company, a further recommendation from the guys at CocoVail, the only lager/Pilsener available was what she’d already had at BierCaB.

And so the barman talked her into a ‘Trinkets’ Session IPA brewed by Garage. Not enjoying the bitter flavour of IPAs generally, he assured her it was not at all like that. And so she tried it – and fell …

It had a very fruity aroma and a pleasant feel in the mouth – and no bitter aftertaste. It was a bit of a revelation.

Gluttonous husband also had Garage’s own IPA which he described as ‘inoffensive’ but a little underwhelming flavour-wise. Suitably bitter at the very end, it was more fruity to begin with – not unpleasant to start an evening’s drinking but nothing to write home about. 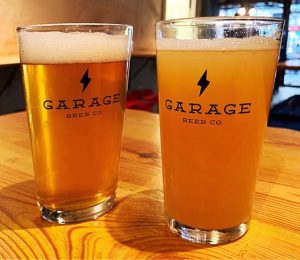 Next up was the ‘Soup’ – another Garage-brewed IPA in the New England style. This was more to gluttonous husband’s liking. The colour and opacity testified to its heightened flavour.

It was a mild level of bitterness (compared to some other IPAs consumed on this trip) but the beer had much more substance than the first one. All good. 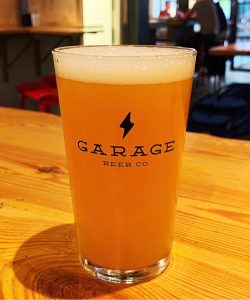 It’s a fun environment, and interesting to see the brew vats at the back of the long room. Good music, a small food menu and a knowledgeable and friendly staff. 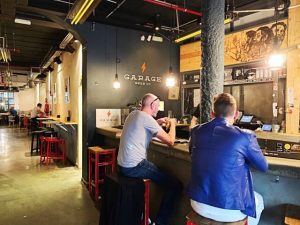