One of our favourite things to do before flying home at the end of a holiday is a champagne brunch – easy to do in Asia on a Sunday, but Saturday is another matter.

The search for Saturday brunch is particularly important in Bangkok as one of the direct flights back to Melbourne leaves on a Saturday night.There’s nothing better, when you need to check out of your hotel, than whiling away a few hours with decent food and an unlimited pour.

Having caught up with an old mate we’d met at our first champagne brunch in Bangkok (see the review of Tables Grill here), we leaned on him for details of where we might spend a Saturday.

It’s not easy to find a free-flow champagne Saturday brunch in Bangkok. Tables Grill flirted with offering it on Saturdays but shut that down a while back. The W Hotel has a prosecco brunch but not every Saturday. You can read our review of that here,

And so we headed a few blocks down from our hotel on Bangkok’s famed Sukhumvit to the Hilton, and Scalini. Our friend found it as an option but warned he’d not had a chance to try it for himself.

The offering reads well here, although champagne brunches in Bangkok have become a bit expensive. Still, we opted for the additional free-flow champagne, on top of a small number of food stations and a menu of cooked-to-order dishes.

Scalini is on the second floor of the hotel and brunch starts promptly at 12.30pm. There’s an apple cider cocktail to welcome guests. Greedy Girl had a sip and found it a bit too sweet for her liking, so decided to wait for the champagne – Ernest Rapeneau non-vintage brut from Epernay. In Australia it retails for around $39 a bottle so not exactly an expensive drop. Still, any port in a storm …

The dining room is long and reasonably narrow. The pick of the seats are by the window, with lots of natural light. We were originally shown to a table in a partitioned centre area which was a little gloomy.

We asked to move – this caused a bit of consternation but we’re not sure why given the brunch wasn’t fully booked.

There’s also a bit of ‘upselling’ going on. We believed it was all-inclusive, but if you want your water in a bottle, that was an additional charge. Thanks, but no thanks.

Scalini, as you’d expect, is an Italian restaurant but the buffet stations were fairly standard – and rather multi-cultural. There is sashimi (but no sushi), plenty of fresh oysters and lobster (more on that later). The ‘statement’ station is a rather large roast pig – and he’s a big ’un as you can see from the picture at the top of this post.

We chose a few options from the buffet to begin. Gluttonous husband, as is his wont, started with fresh oysters. 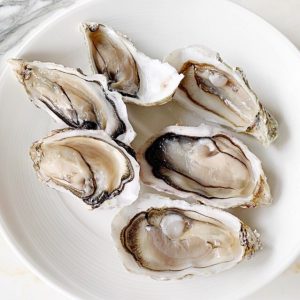 These are fine de Claire oysters from France and an Irish variety which gluttonous husband said were his new favourites. He thought the French ones were a bit salty but the Irish ones very smooth.

Greedy Girl had a bit of sashimi salmon and tuna to start but also a dish from the ‘live’ station – tuna tartar with a citrus foam. 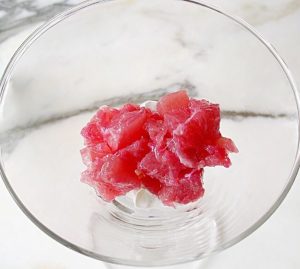 The servings offered by the chef are pretty small, it has to be said. Greedy Girl asked for an additional spoonful of the tartar on what was first offered (well, she wouldn’t live up to the nickname otherwise).

The tuna was actually quite good, but the citrus foam was a bit like a lemon sherbet – it wasn’t too sweet but it just didn’t seem to really work with the tuna.

We decided to order some dishes from the main menu. First up we selected the roast duck.

And herein we had a little Lost in Translation moment. We clearly asked for two servings (one each), but only one was brought to the table and that took a rather long time. Given the brunch is only 2.5 hours, waiting 20 minutes for a dish seems a bit excessive.

Thankfully, one member of the wait staff seemed to get what was being asked and – not too long later – a second plate of duck arrived. 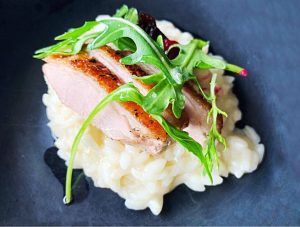 The duck was nicely cooked and well seasoned. The flavour was excellent. The risotto was also nicely cooked and quite creamy. As for the advertised truffle? Not in evidence, your worship. That was a bit disappointing.

Next we ordered the lobster – trying to communicate as clearly as possible that we’d like one each. Hey, presto … two of these arrived. 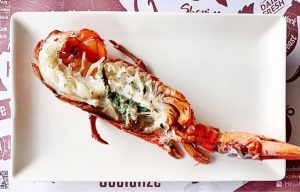 These are grilled-to-order and were a step above what you normally get at brunches. Most brunches have the cooked lobsters sitting out on ice for the duration and they get very dry. Greedy Girl still thought this was a bit dry but gluttonous husband thoroughly enjoyed his.

We were on a roll; gluttonous husband ordered a cod dish, while Greedy Girl took a poached egg with caviar. 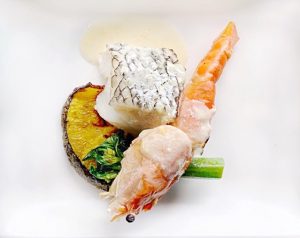 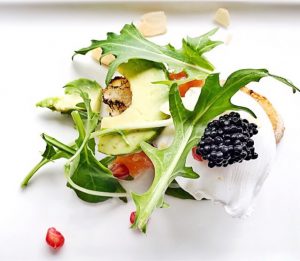 Gluttonous husband was very pleased with the cod, although the prawn on the plate was largely decorative. The fish itself was moist and flaky. It was so good, he ordered a second.

The egg and caviar was an interesting dish. The egg was still runny (points for that) but there were some different flavours and textures here. It was served with a little smoked salmon, avocado and caviar (all pluses) but also some flaked almonds and what looked to be pomegranate seeds (slightly odd). 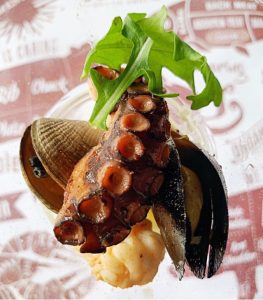 Roasted squid with clams and mussels

Anyone who’s ever tried to cook squid knows it’s very easy to make it tough and rubbery. Sadly, this was both. The shellfish accompaniments were OK, but the squid remained steadfastly unchewable.

Greedy Girl decided to try roast piggy, to ensure his sacrifice wouldn’t be in vain … 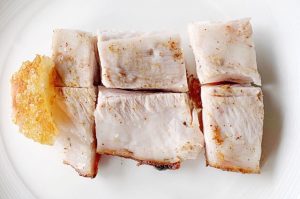 The crackling was actually quite good – a satisfying crunch and just the right level of salt. The pork was a bit dry, sadly.

She left most of this for gluttonous husband and headed back to the buffet to get some jamon iberico – which was absolutely delish. 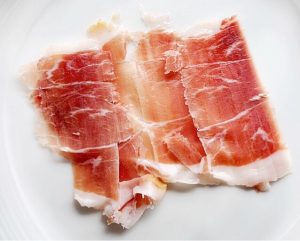 But we persevered with the hot dishes. Next up was, arguably, the dish of the day. Steak with foie gras. 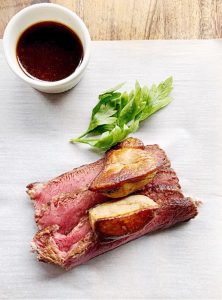 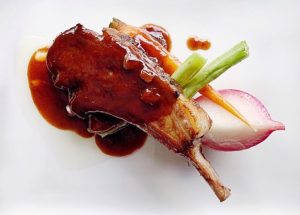 It was supposed to be served with a herb crust, although there wasn’t much evidence of that. The ‘strawberry balsamic red wine sauce’ was a bit sweet for Greedy Girl’s taste, although the lamb was cooked well.

Having taken all the options on the menu, we decided to have a little dessert. 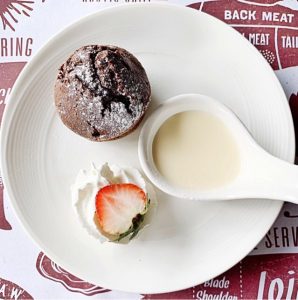 It was perfectly edible – still a little runny in the middle. Not a bad effort at all.

And, of course, we were mesmerised by what Australians call the fairy floss (cotton candy) machine. And here it is in all its strawberry lusciousness. Step away now if your teeth are hurting. 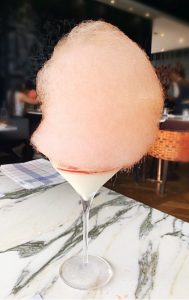 And we were done. All told this brunch cost us A$220 each which was on the expensive side as I’ve mentioned – especially for the quality of champagne. Still, it was a great way to fill in our day. We left full and reasonably satisfied.