This restaurant has rebranded as ‘The Study’.

Keong Saik Road has, literally, a colourful heritage – apparently it was a noted red-light district in Singapore. Today, this Chinatown street offers a different kind of hospitality. The shophouses crowding either side of the road are crammed with hotels, bars and restaurants.

One is another effort by the British chef Jason Atherton, of London’s Pollen Street Social, Pollen in Singapore’s Gardens by the Bay and innumerable other outlets, including the nearby tapas bar, Esquina and the excellent Table No. 1 in Shanghai. This is Keong Saik Snacks, a tiny dining room, shoehorning in around a dozen tables as well as six seats at the bar, directly abutting the open kitchen. This is where Greedy Girl and gluttonous husband headed on a whim earlyish one Friday night. Now, Singapore never gets cold, so being able to reach out and touch the four chefs busying themselves in front of ovens, hobs and salamanders, all blazing hot was a bit confronting. Greedy Girl asked to keep the menu to fan herself.

The restaurant is part of a boutique hotel, with a quirky little barbershop next door. This is a working barbershop but, a few nights earlier when we were heading further afield to Fordham & Grand, we spied a rather long queue trying to get in the door – and not looking for a shave and a haircut. This is, apparently, the entrance to Keong Saik Snacks’ secret bar. You need to give the password for the week to gain admittance, which can be found fairly simply by doing a Twitter search.

Anyway, given the use of the word ‘snacks’ in the title, Greedy Girl and gluttonous husband opted for just a few dishes to share. It was too hot to linger. First up was an absolutely yummy tuna tartare. A beautifully-fashioned patty of the tartare sat underneath a very thin crouton, topped with radish slices and a whipped avocado. The tuna was finished with a sesame soy dressing and it was perfectly balanced. Greedy Girl estimates it was one of the best tuna tartare dishes she’s ever eaten. 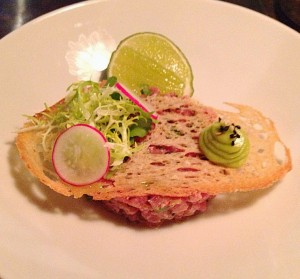 Gluttonous husband’s choice was salt and pepper squid, served with thinly-sliced green chilli and a garlic mayonnaise. The squid was a bit chewy and the garlic mayonnaise was, quite frankly, dire. That was left in a pool on the side of the plate. Despite the texture not being as tender as we’d like, it very quickly went down the hatch. Gluttonous husband described the spiciness and crispiness of the batter as akin to enjoying a feed of salty peanuts – it was very moreish. 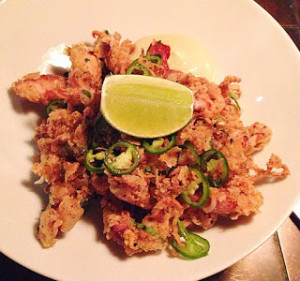 We moved on then to share a hamburger with fries, opting for the supplemental slice of foie gras. Given we were sharing, the chef asked if we’d like him to cut it in half. Yes, please. The team then proceeded to cut each item of the dish individually and plate up two, ‘half hamburgers’. It was fascinating to watch. The burger patty, described on the menu as ‘Aged Irish beef’ was accompanied by bacon, cheese, tomato, onion and lettuce (as you’d expect) as well as caramelised onion. Greedy Girl and gluttonous husband both agreed the dish could have used a bit more of that, but it was certainly a very good burger and improved by the foie gras. 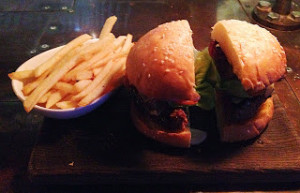 Each half was assembled individually

The other dishes going out (we certainly had an eagle eye) all looked great. The service was also very good with a lot of personality. It’s definitely worth trying again for other menu items and also, to move on to the secret bar.