April is the hottest month of the year in Thailand, a fact lost on Greedy Girl when she booked this sojourn. With daytime temperatures routinely hitting 38 degrees Celsius (or higher), it’s not conducive to being terribly active. What to do on a lazy Sunday?

And of course the only answer to that was brunch. A staple of five-star hotels throughout Asia, Greedy Girl investigated Bangkok’s top options, hoping for something with a view, perhaps of the Chao Phraya river.

While the Mandarin Oriental has a lovely terrace overlooking the river, it didn’t offer Sunday brunch. Having looked through various blogs and not feeling inspired by many of the offerings among the usual suspects, she found Voila restaurant at the Sofitel Sukhumvit.

On the second floor of the hotel, there was no view to speak of, but this brunch had several advantages; it was essentially a degustation style, with wait staff bringing dishes directly to the table, as well as the myriad buffet offerings. And, it had a free-flow of Moët et Chandon champagne. Sign me up, said Greedy Girl, and gluttonous husband concurred.

There are three options for diners – a pairing with non-alcoholic drinks is the cheapest, followed by unlimited cocktails, wine and Australian sparkling wine. We took the premium package, which included the Moët. This was priced at 4750 Baht (with a service charge and tax on top). It’s not cheap, but certainly comparable to other brunches Greedy Girl and gluttonous husband have enjoyed around the world.

And, just a few dishes in, we felt like we’d unearthed a bargain. The quality of the food, beverages and service were very good. Speaking with the very engaging food and beverage manager, Remi, we learned that champagne attracts a high level of import tax in Thailand, making our favourite tipple a rather expensive little habit.

The room at Voila overlooks the lobby and can be reached via a staircase or the elevators. The staircase void is dominated by a large purple chandelier. Seating is available in two main areas – a large-ish room and along a corridor leading down to the wine cellar and ‘fromagerie’. We gratefully sat at one of the tables in the smaller space and tried to think cool thoughts. Still melting from the outdoor heat, it was hard not to gulp down the first glass of champagne.

But eventually we acclimatised; the air-conditioning wasn’t too frigid (as can be the case in a lot of indoor spaces in Asia) and we approached the menu with gusto.

At each table, there’s a menu of dishes that are ‘passed around’ for brunch. Diners can take all or none of them and the buffet, with its standard stations (roast meat, seafood, sushi/sashimi and dessert) ready and waiting as well as a selection of Thai delights, including traditional green curries and salads.

We’d barely settled when the first course arrived – a lobster bisque, done in the style of Paul Bocuse’s famed VGE soup, with a giant pastry dome. The bisque had a few chunks of lobster and was somewhat lightened in taste by the addition of lemongrass – a Thai touch, and very enjoyable. 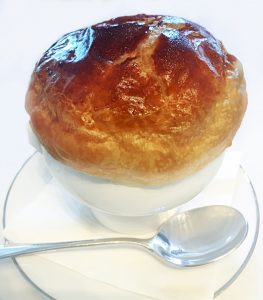 Following closely behind was a half lobster presented in the shell, dressed with a garlic butter. Gluttonous husband’s skills came to the fore here, cracking the giant claws through his own brute strength (he later found some implements that would have assisted) and enjoying the very sweet meat. 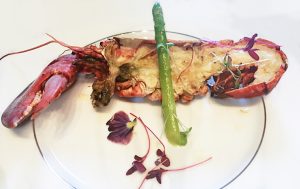 Both of these dishes were on top of the ‘pass around’ menu, which was just about to start. Greedy Girl thought it unlikely she’d even look at the buffet stations, but she is getting ahead of herself. Gluttonous husband took an opportunity to go check out the ‘Fines claires’ oysters and brought back three. They didn’t appear to be all the same species but there was no information on where they were from. Gluttonous husband commented that he enjoyed all three but two were much saltier than the other. 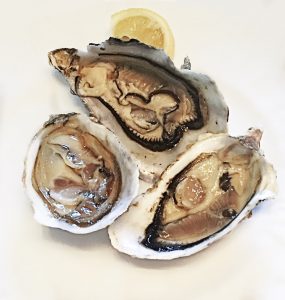 And so to the first of the ‘pass around’ dishes, described as a baked shrimp ragout topped with creamy polenta and Parmesan. It was indeed creamy – a little like the mornay sauce of yesteryear. The shrimp was still quite firm and the texture of the dish overall was very good. 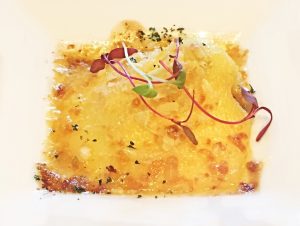 Asparagus must be in season here because it was used as a garnish on several plates, including the next dish, a pan baked ‘snow fish’ with lemon confit and a saffron emulsion. The presentation here was quite nice and the fish was firm and mild. Greedy Girl didn’t particularly enjoy the emulsion but gluttonous husband was more than happy to tuck in, finishing both servings. Snow fish (aka Black Cod or sable fish) is apparently very highly prized in Thailand. 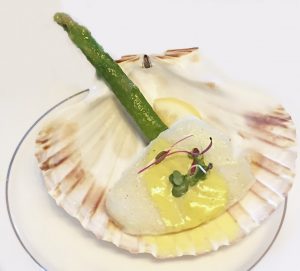 Next up, gluttonous husband decided to check out the various buffet selections, coming back with an assortment of seafood, including what Australians would recognise as a yabby, although it was listed here as a crayfish. With fond memories of fishing them out of the local dams up in country areas and boiling them for a sensational plate of sweet meat (usually topped with oodles of garlic cream sauce), we delightedly tucked in. The meat here wasn’t quite as sweet as an Australian yabby but was a nice little surprise.

We then got another dish from the pass around, crispy potato gnocchi with a Gorgonzola cream sauce. The gnocchi didn’t quite work – they were more chewy than crispy, although the sauce was quite enjoyable. 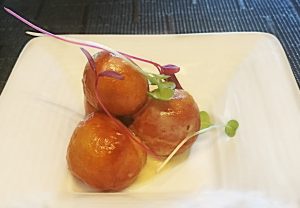 We then enjoyed one of the most tender lamb cutlets we’d had in recent memory. This was roasted and cut from the rack, served with French beans, tomato, olive and lamb jus. Unlike our previous gastronomic outing at Sirocco the olive here didn’t overpower the dish. Indeed it was such a tasty combination, gluttonous husband made a note to try an olive tapenade with his Lamb cutlets sous vide in the not-too-distant future. 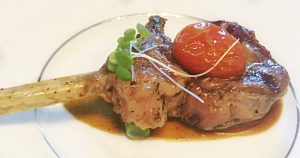 Next up was a crab ball fritter served with a spicy mango salsa. The crab ball itself was enjoyable but Greedy Girl didn’t get much spice, nor much of a hit from the mango. Still, it easily went down the hatch. 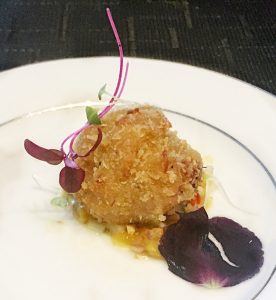 It was time for a change of pace. Greedy Girl visited the sushi chef and ordered her two favourites – tuna and salmon sashimi. What a beautiful sight; fanned delicately on the plate, Greedy Girl thought it too pretty to eat. Almost. When she started eating raw fish, ahem, a few years ago, her tastebuds gravitated towards tuna but these days, salmon has taken first place on the leaderboard. Delish. A little later, gluttonous husband took some sashimi options, including scallop and Hamachi, both of which he pronounced more than edible. 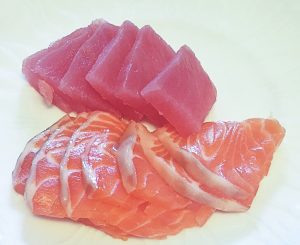 Our next dish was presented in a takeaway box – a baked river prawn with vermicelli noodles. While the prawn was a little mushy, the flavour from the noodles was quite intense. Struggling with the sheer volume of food, we opted not to fill up on carbs and left a fair amount of this in the box. 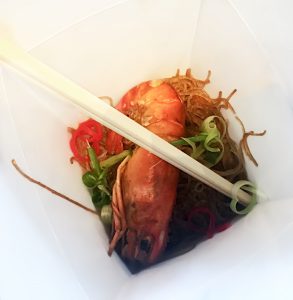 More Asian treats followed. Next was one of gluttonous husband’s favourites, the fried rock lobster with a curry sauce. Thais know curry and this sauce was to die for – beautifully balanced, just the right amount of heat for us wussy Westerners and it didn’t overpower the lobster. Delish. 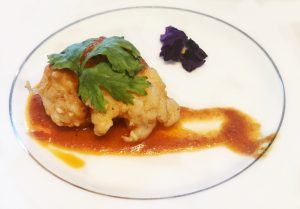 We then were presented with crispy fish, served with a chilli and basil sauce. The fish was indeed crispy, which is a definite tick for the kitchen, but Greedy Girl thought it was a step too far. She’d had enough seafood but gluttonous husband was happy to finish the plate. 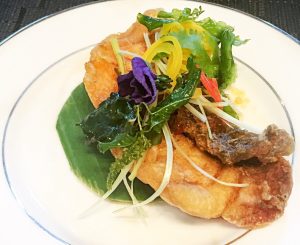 The next dish to come out was a roasted beef tenderloin with thyme red wine sauce and a cafe de Paris butter. This was a little sad. The meat was tough and dry and not even the luscious butter could improve its texture. We tried it and passed. Most of the plate remained uneaten. 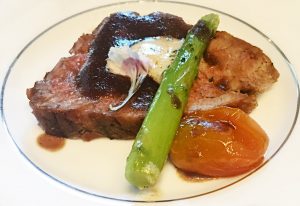 And so we waited for the only dish listed on the menu that hadn’t arrived – the pan fried foie gras (pictured at the top of this post). Chatting to the affable Remi, we remarked that we were looking forward to it. He assumed we’d already been served and went to check for us. Immediately, the chef prepared two plates. That ‘pass around’ obviously passed us over the first time.

And what a way to finish. The foie gras was seared to perfection, served with a delightful fig chutney, balsamic reduction and gingerbread crumbs. Yummo.

And that was that – sort of. Greedy Girl helped herself to a selection from the dessert table – a bitter chocolate tart, a couple of different chocolates and an intense lemon macaron. Gluttonous husband headed for the fromagerie and took a variety of gooey cheeses each stinkier than the last and savoured every mouthful. We were impressed that the cheese was at the right consistency. So many times, particularly throughout Asia, the cheese is served rock hard straight from the refrigerator and the flavour doesn’t have a chance to develop.

But we were definitely done. We’d sipped our fill of champagne while Greedy Girl took two different cocktails, expertly prepared and gluttonous husband finished with a dry martini. We’d had more than three hours of excellent food, wine and service, with the bill coming in at around A$180 a head (including a service charge and tax). We felt it was money well spent.

Sunday brunch is fast becoming a favourite thing for us to do in Asia. We’d enjoyed it previously at the Conrad Hilton in Hong Kong as a way of passing a few pleasant hours before heading to the airport and the overnight flight home.

If you don’t like to sit, take your time sipping some great drinks and experience a big variety of food, it’s possible you won’t derive full value for money. Greedy Girl and gluttonous husband think they were definitely in front by the end of proceedings. An excellent way to spend an afternoon.