A year ago, Greedy Girl and gluttonous husband accompanied a group of friends to Grossi Florentino upstairs for a birthday celebration. It was such an excellent experience of Italian fine dining, we decided to book a Christmas celebration then and there for this year and asked for the ‘star table’ next to the windows.

While a couple of friends couldn’t make it, four of us ventured forth on a sunny and mild evening into Melbourne’s central business district. Saturday nights in Melbourne can be hectic and this was no exception. Grossi Florentino is in a heritage building at the eastern end of the city. The upstairs dining room is certainly one of the most romantic restaurants in the city, with soft upholstered chairs, sconce lights, wood panelling and some beautiful paintings. Around us, tables for two cooed and kissed, providing a little extra entertainment.

But we were there for a pleasant evening of wining and dining. The standard menu upstairs (there’s also a Grill and an inexpensive bar on the ground floor) is A$140 for three courses. It pays to know that one of Melbourne’s best chocolate soufflés is available here, before deciding how to structure one’s eating plans, as diners are not immediately given the dessert options.

The savoury courses are divided into antipasti, primi and secondi. We negotiated to share two antipasti between the four of us and then to share two soufflés at the end. Sorted. While the men took various beers, Greedy Girl and The Artist began sipping on a glass of Henri Giraud Code Noir champagne; we were amazed to find it made from only red wine grapes. It was certainly very rich and quite a nice aperitivo although we both agreed we should have finished it before we started on any of our snacks – we felt the qualities of the champagne were not as enjoyable after eating.

The number of extra courses makes Grossi Florentino’s three-course menu turn into more of a degustation. Platters of spuntini were placed before us, even before we made any selections from the menu proper. 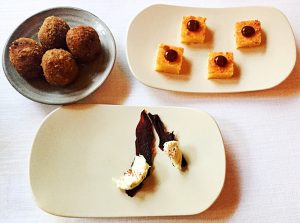 We were treated to some croquettes with pork and potato, cubes of polenta cake with a tomato sauce and crispy dried capsicum with baccala – salted cod. The texture of the latter was very interesting – crisp and yet slightly chewy at the same time. The salted cod was creamy and perfectly edible. The polenta cake tasted a bit too sweet for Greedy Girl’s liking and the croquettes were very good.

Next to come out were some sardines drizzled with olive oil and flecked with garlic and chilli on a crisp cracker. Gluttonous husband thought he’d get a double share but Greedy Girl has a new-found respect for the small, fresh sardines – what she still can’t stand is the tinned variety. These were very tasty. 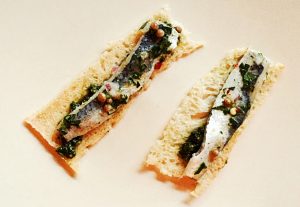 It was time to make some selections from the menu. Some of the antipasti courses aren’t suitable for sharing, our waiter opined, but the two we decided on were easily split. When patrons opt to share here, the kitchen’s preference is not to put a dish in the centre of the table – rather the portion is divided among separate plates. Gluttonous husband and Easily Pleased opted for ‘Moonlight’ oysters from Batemans Bay on the NSW south coast. 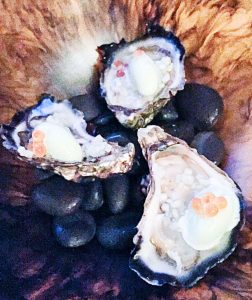 Greedy Girl and The Artist shared veal sweetbreads, served with a zucchini flower stuffed with crab, charred capsicum, citrus and toasted almonds. It was a nice dish. The sweetbread was on the large side and the half portion was plenty. 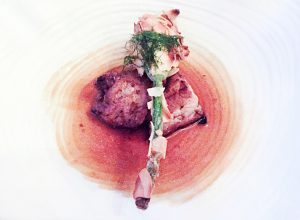 And so, to our primi piatti – which we’d started to wash down with a bottle of Rockford Home Break Cabernet Sauvignon from the Barossa Valley. It’s not easy selecting a wine here – the list runs to over 50 pages with an exhaustive array of Italian and French wines. Still, this was a delight; the wait staff here take their roles seriously. Glasses are ‘seasoned’ with the wine (this took place with our glasses of champagne too).

Apparently the practice isn’t unheard of at high-end wineries where the glasses used are newly cleaned, although the jury seems to be out on whether it actually does something for the taste or just a bit of wine snobbery. Greedy Girl has not seen it before and certainly doesn’t recall it from previous visits to the restaurant. Having said all that the wine was quite superb.

To start with, Easily Pleased took the ravioli all’uovo, which is an egg yolk inside the pasta, with smoked ricotta, Amaretti and an aged balsamic (drizzled over the top). An option was shavings of Alba truffle at A$50 which he decided to forego. The yolk oozed dramatically out of the cooked pasta – not an easy thing to accomplish. He enjoyed the dish. 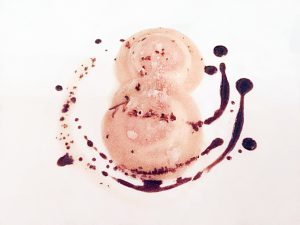 Gluttonous husband also took a pasta – a duck tortellini served with porcini mushrooms and pear. He enjoyed it but said it got a little dry. The sauce had been reduced a lot – maybe too much. 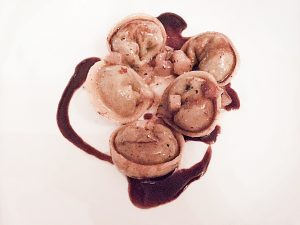 Greedy Girl’s eyes lit up when she saw yabbies on the menu. These are fresh-water crustaceans, somewhere on the continuum between a prawn (shrimp) and a langoustine. Their flesh is very sweet and delicious. This dish was garganelle pasta with local asparagus and studded with the yabby tails. It was very green and the flavour was very green too, dominated by the asparagus and the yabbies were almost lost. Greedy Girl and gluttonous husband agreed it was crying out for a touch of acidity.

Only The Artist decided not to start with pasta. She took the risotto con bruscandoli, which was flavoured with Victorian hop shoots and prawns. This is a traditional Venetian risotto, made only when the hop plants are flowering during a relatively short season. It was delicious; The Artist definitely got the pick of the starters. 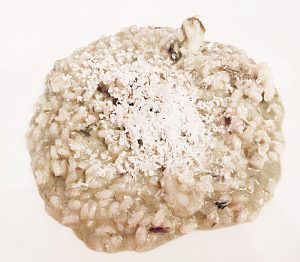 Risotto with hop shoots and prawns

And so to main courses. Easily Pleased chose the “Great Ocean” duck, served with currants, balsamic, charred leek and Brussels sprouts. He very much enjoyed the dish, although Greedy Girl opted not to try it, not enjoying Brussels sprouts. 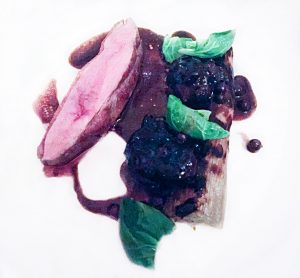 Gluttonous husband took one of his favourite fish, a Bass groper, served with couscous, bottarga and a blood orange sauce. It was a nice piece of fish and an attractive plate, but a little dry and totally overwhelmed by the sauce which was just too sweet for his tastes – Greedy Girl concurred. 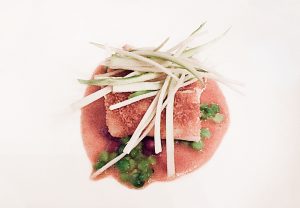 The Artist took Sher Wagyu rump cap served with watercress and horseradish. It was a soft and incredibly flavourful piece of meat. She was well pleased, claiming she thought she’d made the best selections among us – it was hard to disagree. 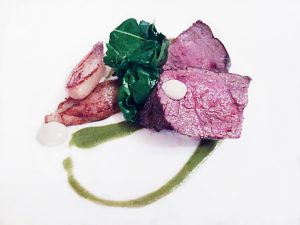 Greedy Girl took John Dory – a number of small fillets were laid on the plate with kale, macadamia nuts, saffron, nduja and celeriac purée. It was a pretty plate (pictured at the top of this post) but didn’t really deliver on flavour. The fish was again a bit dry and although the macadamia flavour was very nice, nothing else really stood out.

As we drained the last of the wine, we contemplated dessert. First up was a ‘pre-dessert’ consisting of a vodka-infused cherry with prosecco gel and a lemon sorbet. It was sensational. That was followed by the soufflé – served in individual tiny copper saucepans (that were incredibly heavy) with a quenelle of “grains of paradise” ice-cream, a ginger biscuit, hot chocolate sauce and a hazelnut praline.

Grains of paradise is a spice, an alternative to black pepper. While the raw product looks like the pepper berries, it’s actually a dried seed with a mellow warmth and a hint of citrus. Greedy Girl, who doesn’t eat ice-cream as a rule, handed hers over to gluttonous husband. We were recommended to drop it into the soufflé and then pour in the chocolate sauce.

Greedy Girl just added the sauce and was a very happy camper, especially the delightful hazelnuts down the bottom of the soufflé which added a wonderful dimension. She did sample some of gluttonous husband’s plate when he decided not to finish, not coping too well with sweet dishes just at the moment and thought the intense chocolatey flavour was sadly diminished. 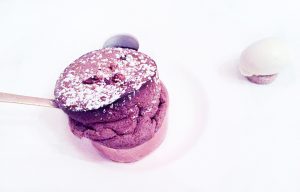 And we were done. On our way out the wait staff kindly gave us a bottle of the restaurant’s own red wine vinegar and olive oil to take home. This was normally only offered to patrons taking the tasting menu so we were touched by the gesture.

Grossi Florentino has a well-deserved reputation for Italian fine dining. It was possibly not the greatest meal we’ve had there, especially where the fish was concerned, but there were plenty of enjoyable tastes.