Having visited a number of other cities in China, there’s no doubt Shanghai is the most international. That’s due in no small part to the large number of expats who bring a strong demand for their dining traditions. One of those is brunch.

Shanghai has an extensive and excellent metro system but there was no nearby station to get to British chef Jason Atherton’s latest local eatery, Commune Social. We looked up the walking route online and calculated it would take about half an hour to stroll there, taking us along the banks of the Suzhou river. Feeling intrepid, we set off.

Commune Social’s claim to fame (other than serving brunch) is its al fresco dining in a leafy patio. On a beautifully sunny lunchtime we successfully negotiated our way to Xizang Middle Road and a groovy-looking shopfront.

This is another collaboration between Atherton and Singapore hospitality magnate Loh Lik Peng; we’d read that it had Shanghai’s best patio – well, perhaps the best one not overlooking the bund. It doesn’t take reservations and doesn’t add a service charge to the bill, unlike most spots we’ve experienced in China.

Greeted by a European Maitre D, we were shown to a table in a very bright spot outside after first checking that smoking wasn’t permitted in the open air. The Maitre D told us smoking had been banned in all eating areas in China a few months before. All good.

While the area is leafy and also has a number of large umbrellas, we found ourselves in one of the few spots in direct sunlight. As such it wasn’t a spot to linger. Rather than taking the set menu, which featured a number of interesting sounding dishes but none of the ones we really wanted to sample, we decided to order a la carte. Perhaps we’d been a bit burnt by the set menus at Mr and Mrs Bund …

We decided we’d try three dishes and see how our hunger panned out. We chose the ‘Spanish breakfast’, crispy salt and pepper squid with a black ink aioli and iberico pork and foie gras burgers with avocado and pickled cucumber.

The Spanish breakfast came out first and reminded us of many of the dishes we’d had at Atherton’s restaurants around the world, including Esquina in Singapore. Essentially it was a very lightly poached egg with cubes of potato, a slightly cheesy foam and a tomato relish with chorizo sausage slices. The texture was quite runny but the flavours were very good. 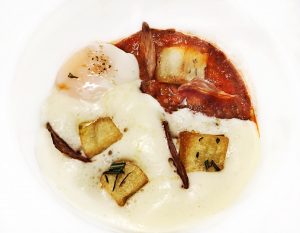 Next up was the squid. We expected something with a bit of a spicy hit but it was definitely on the milder size. It was also, disappointingly, a bit tough to the bite. The pool of aioli, coloured with squid ink, looked very dramatic but wasn’t terribly successful in terms of flavour in our humble opinion. We gave it a good try but left most on the plate. 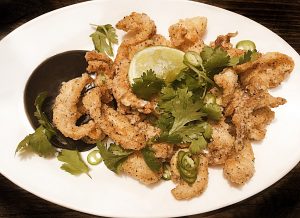 We followed this with the iberico pork and foie gras burgers, pictured at the top of this post. We were particularly excited to try these and while they were very edible, they weren’t a huge flavour hit. The foie gras could barely be discerned. The avocado was ‘creamed’ and whipped into a light sauce and the pickled cucumber was a nice touch.

For two of us, for a snack, three dishes were plenty. We paid our bill and prepared to walk back through the streets, having had a quick pit stop in the restaurant’s conveniences. Greedy Girl could barely stand up inside (she’d been warned the ceiling heights were very low).

It was undoubtedly a pleasant enough place to sit and the number of expats and tourists there was testament to it being sought out by westerners. On our previous visit to Shanghai we visited Atherton’s Table No 1 on the south Bund and it was a bit of a saviour in terms of getting a respite from Chinese food but the vast majority of other patrons there were still Chinese.

This led us to ponder European food in Shanghai – was it ‘toned down’ to appeal to the widest possible audience? Certainly nothing we sampled had any huge whack of flavour. Perhaps it’s the reverse of what Greedy Girl experienced in her formative years in the UK, where other cuisines, particularly Chinese and Italian were ‘interpreted’ for local tastes.

Still, Commune Social is a pleasant spot and, on a clement afternoon, there would be a lot of worse options for a Shanghai brunch. 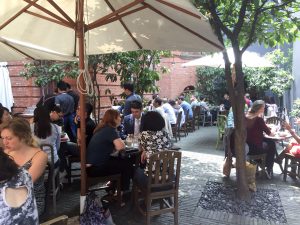