The thing that immediately hits you walking into the entrance of Matilda 159 is the heat and the smell. The kitchen is at the front of this sleek eatery and dominated by open flames and hot coals.

Melbourne chef Scott Pickett has been growing his empire steadily over a number of years. While his fine dining restaurant Estelle, in Northcote, has morphed into a more casual bistro, Matilda is a rather upmarket twist on French food. It’s still more bistro than fine dining though, even though there is a degustation on offer.

The room is dark and moody and the service is on the formal side rather than particularly friendly. The atmosphere, however, is dominated by very loud music. Admittedly we were in for an early booking so the room wasn’t very full and that may have been why the music seemed at such a hefty volume. Other things attracted our attention later, but Greedy Girl is getting ahead of herself.

Celebrating Pucci Girl’s birthday, we ordered a bottle of champagne and opted for a la carte choices rather than a tasting menu.

There’s a lot of flair about the food, although it has to be said, we didn’t get a huge amount of enthusiasm about descriptions from the wait staff. A case in point – this was gluttonous husband’s first course, the smoked bone marrow with David Blackmore wagyu 9+ bavette. 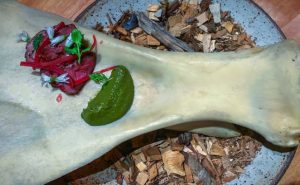 A dramatic-looking dish but there was no presentation from the staff. The flavours were OK but not as full or rounded as perhaps would be expected.

Greedy Girl and her friend The Francophile both had the dish featured at the top of this post – dressed spanner crab, served attractively in the shell, with prawn butter and flat bread.

This was light, flavourful and quite delicious. The prawn butter gave a touch of richness but wasn’t overpowering. Delish. 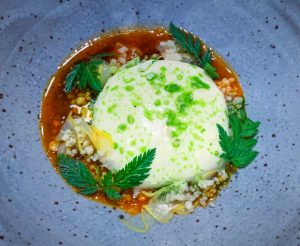 We moved to mains, although The Francophile decided to keep room for dessert by having a second starter – a free range pork dish from Borrowdale Farm, a Queensland-based producer adhering to ethical standards. 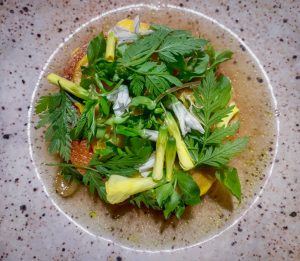 Pucci Girl and gluttonous husband shared the duck from the Macedon Ranges just north of Melbourne, served with a blood orange sauce and a side dish of golden beetroot. 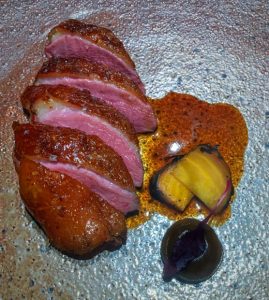 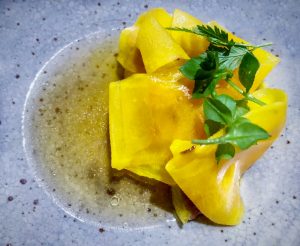 Greedy Girl opted for fish; Humpty Doo barramundi (from the Northern Territory) with broccoli and lemonade fruit. The fish was beautiful but the accompaniments didn’t really work for Greedy Girl’s tastes. She wanted to eat the fish separately. 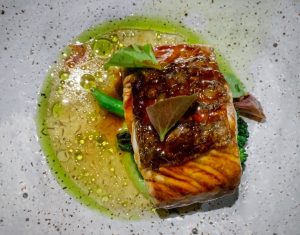 A couple of sides went down a treat, especially the potatoes, although the wakame (seaweed) butter wasn’t Greedy Girl’s preferred combination. 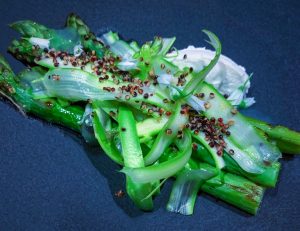 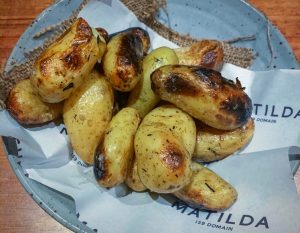 It was at this point in the evening when a fight erupted at another table. Screams of female patrons easily outstripped the music volume, while a couple of guys engaged in a scuffle. Staff came from everyone and, before we knew it, all was over. Several tables cleared and the people headed for the exit. In all her years of dining, it was a first for Greedy Girl; she’s seen dogs nestled under the table at Paul Bocuse, a marriage proposal at Per Se, and hugely drunken patrons making total asses of themselves in Hong Kong but never a donnybrook. After a few flutters of nerves, we turned back to the eating in progress.

And it was time for dessert. The Francophile couldn’t go past a tarte tatin which had a delectable golden hue, with lots of vanilla flecks in the ice-cream. 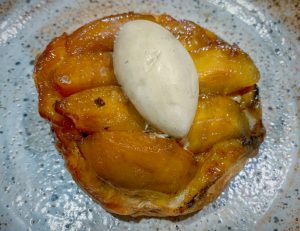 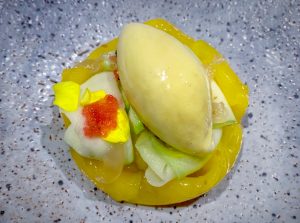 Mango with toasted rice and Jasmine

And we were done, apart from a complimentary dish of little soft meringue bites, we headed for the exit. 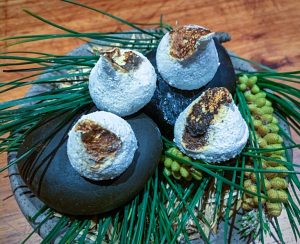 It was a reasonably enjoyable feast, notwithstanding the floor show, but some of the flavour combinations were a bit too out there for our liking. The service, too, was rather dispassionate, no matter how we tried to engage with the staff. Still, it showcased a lot of different influences and great produce, giving a twist to French food.