What is Australian food? As we travel around the world and indulge in fine dining, it’s a question we’re asked many times.

And until now, we’ve been struggling to come up with a response. When Australia has been represented on the world stage, coming up with icons that reflect our culture and/or unique heritage have tended to be somewhat cliched – meat pies with sauce, “bush” foods such as witchetty grubs, or kangaroo meat, inevitably paired with a red wine reduction.

There are restaurants throughout the country that offer indigenous flavours – the exceptional Attica is one, and Brae another. Melbourne’s Vue de Monde has also showcased a number of indigenous ingredients. But Adelaide chef Jock Zonfrillo has taken it to a new level with Restaurant Orana. It’s an incredible story – how a chef of Scottish and Italian origins who once worked for Marco Pierre White ended up in Adelaide and showing the locals what Australian food is all about.

Orana is a small restaurant, located upstairs from Zonfrillo’s Blackwood Bistro (at street level). Indeed, unless you pay attention to the instructions on the website, you’ll end up like us and wandering into the bistro to ask how to get to Orana. It’s accessed via a small, open staircase to the side of the building and the only signage is the restaurant name written on a plain timber door. The whole effect is very low key, belying the huge buzz about the restaurant in Australian food media.

On the night we visited, the dining room was dominated by small tables, with one large group next to the far wall. To the right of the entrance is the kitchen, which isn’t quite open to the dining area but you can see the chefs beavering away. Each table has a mound of bread dough, proving under a glass cloche; this gets taken away to be baked and comes back after the first round of ‘snacks’ is completed.

And so, the fine dining journey began. There’s no menu here, so after the initial enquiry about any dietary issues, everything that comes out is a surprise. Dishes are brought to the table either by a chef or the wait staff.

After ordering a sensational bottle of Eric Rodez blanc de noirs non vintage champagne from Ambonnay. This is a brut champagne made entirely from pinot noir grapes and has a distinctive golden colour. It’s quite a rich flavour and worked very well with the food. We watched the sommelier open the bottle and taste it – which apparently was confirmation enough that the champagne was OK, because we were just poured glasses straight off. It’s a nice courtesy to confirm you’re happy with the quality of the wine but that didn’t seem to be the custom here.

Our first dish set the tone for the evening – a potato damper skewered with lemon myrtle, cooked like you’d do out in the bush, on top of hot coals. We were told the damper would be ready to eat once a gentle tug loosened it from the skewer. It was fearsomely hot on the fingers but very yummy, especially dipped into a small dish of roast lamb butter. Yup. Forget about the cholesterol issues while you’re there and lap up all the flavours of a quintessential Aussie lamb roast. Delicious. 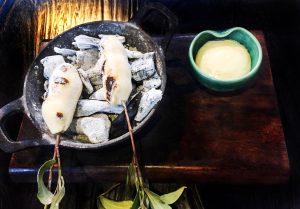 The combinations here are quite extraordinary. Next up, we had octopus with dry aged beef, blood lime and beach succulents. This is where you needed some bread (or extra damper, sadly we’d already scoffed that) to mop up the superlative juices left in the bowl. 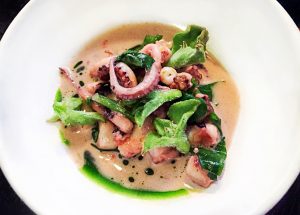 Oysters were offered at the same time. These were from smoky bay. Gluttonous husband was very happy to down both of these plump, luscious, sweet morsels. 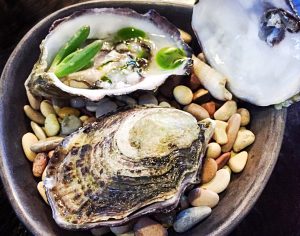 The presentation here is excellent but what wows most of all is the flavour. Next up we had two little porcini mushroom (from the Adelaide Hills) agnolotti, filled with a liquid centre. We were warned to take the full parcel into our mouths and a very delightful explosion it was when we champed down. 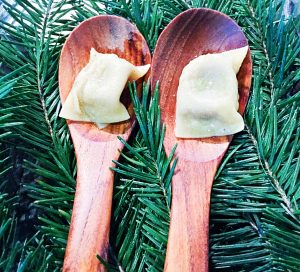 And another little treat was a pancetta, potato and pepper pie. The pepper used is a native variety and Greedy Girl thinks it was dorrigo – that certainly features later in the menu. Again, so tasty and wonderful. Dorrigo pepper is regarded as a ‘bush tucker’ ingredient and grows in the Northern Tablelands of New South Wales. 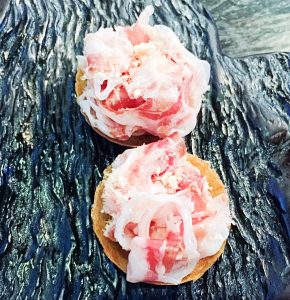 Next, we had kohlrabi, the dorrigo pepper, quandong (a wild peach) and lemon myrtle. The texture of this was beautifully firm and a bit crunchy and the combination of flavours again just brilliant. One most extraordinary element of this dish is the way it is plated. Just look at the precision of this in the picture, below. 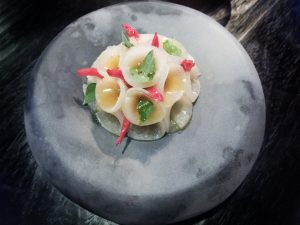 Next up was another taste sensation the chef calls ‘soup soup’ – this is consomme made from crocodile meat, infused at the table with Australian botanicals. There’s no other way of describing this, other than ‘wow’. Hop a plane to Adelaide immediately to try this. So flavourful, so delicious. We’ve eaten crocodile a number of times before, most recently at Uluru but always been underwhelmed by the flavour (and texture), but this is just amazing. 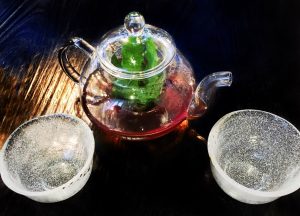 The next pair of dishes to arrive were Spencer Gulf prawns, dusted with dehydrated Davidson plums. The plums are found in rainforest in northern Australia and they’re very tangy – you’d be a brave individual to eat one raw. Again, the dust gave the prawns a lovely edge. So good. 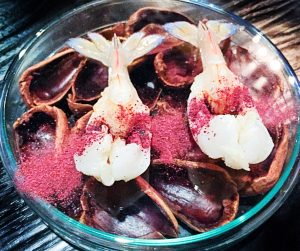 This was accompanied by the dish pictured at the top of this post, an incredibly pretty looking buffalo curd with native elderberries, young almonds and flowering peas. We then moved to kangaroo tendon and native peppers, paired with a scallop from Kangaroo Island, with eucalyptus. The tendon was dried and then fried to ‘puff’ it up. It was spread with a sticky pepper sauce and very edible. The scallop with eucalyptus was presented dramatically and the addition of the eucalytpus quite inspired – it was just a very pleasant dish to eat, without any of the typical aroma associated with eucalytpus. Very clever. 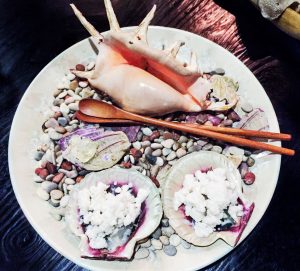 That was the end of our ‘snacks’. We still had a number of courses to come. First was kangaroo, avocado, lilly  pilly and kutjera. Gardeners fond of building hedges will probably know lilly pilly but the berries were used here. Kutjera is an Australian desert raisin, also known as bush tomatoes. The kangaroo was somewhat underdone, which is unusual for such a lean meat, but it was soft and delicious. It possibly wasn’t the most attractive looking plate but it was absolutely delicious. 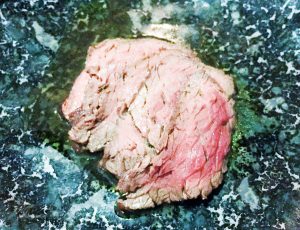 This was followed by marron farmed in the Adelaide Hills, served with aniseed myrle, Geraldton Wax (a type of flower) and green ants. The ants look like powder on top of the marron. Another very pretty presentation. 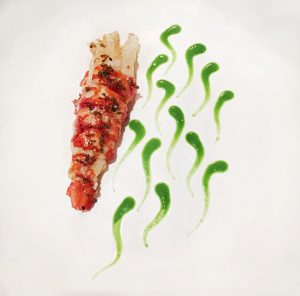 The final ‘main course’ was South Devon beef served with smoked potato, seaweed and kombucha, with some firm, finely chopped beans underneath. The beef was soft perfection and a wonderful way to finish our savoury journey. 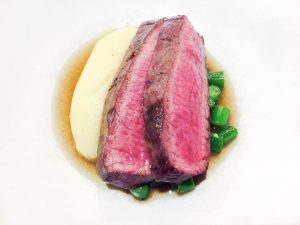 It was time for dessert. First up was paperbark, macadamia and zig zag wattle. This is essentially an ice-cream dish with ‘extras’ and the extras are crispy and nutty and crunchy and slightly salty and, altogether, delicious. Greedy Girl doesn’t like ice-cream but no-one else was getting their hands on this dessert. 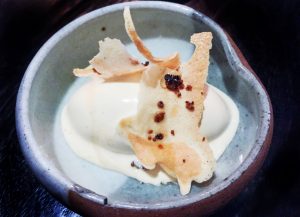 This was served with little wafers either side of ‘native currant fool’. Again, they were popped in the mouth and went down the hatch with the greatest of ease. On the side were small cups of Jillungin tea. This is an infusion that helps promote relaxation and digestion. Perfect! 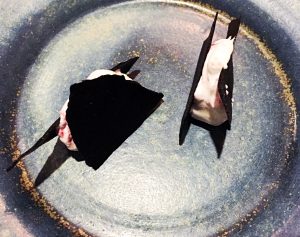 Finally, we had a plate of set buffalo milk with strawberry and eucalyptus. What a revelation this was! Such a clever way to finish a meal – the buffalo milk was light and the sauce, which looked very sweet, was actually not sweet at all, but intensely refreshing.

And we were done. Currently the tasting menu at dinner is A$195 per person and extends to around 18-20 courses, depending on what the chef has planned.

Orana deserves every accolade it has so far attracted in Australia. It would easily hold its own on the international food radar. This is very, very clever food, showcasing the best of Australian indigenous produce and some of the cooking techniques used by aborigines through the centuries. It’s an excellent experience for anyone interested in learning what constitutes Australian food.