Rising to number 42 on the 2018 list of the World’s 50 Best Restaurants, Borago is the epitome of fine dining in Santiago – and the scene of a quiet revolution.

Chef Rodolfo Guzman and his international team at Borago, in the upscale Vitacura area, have set about re-inventing Chile’s approach to fine dining. Yes, you can still get a Pisco Sour to start your evening, but here it’s made with sorrel – and delightfully tangy, complex and enjoyable it is too. 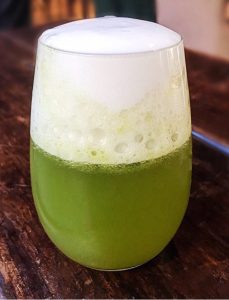 Pisco sour made with sorrel. Salud!

Rather than traditional Chilean dishes, or replicating French fine dining, Guzman and Borago showcase the best of Chilean produce and, particularly, the chef’s knack for foraging.

The name of the restaurant is a play on the Spanish word for borage, a flowering herb. As you’ll see from the pictures here, edible flowers, plants and seaweed feature prominently throughout the menu.

Walking up to this understated-looking building, you’re immediately struck by the smells of a charcoal fire – this is where the evening’s lamb is being slowly roasted. One of the chefs (from Paris – Borago attracts a multi-national staff) told us it started cooking around 2pm, ready for the doors to swing open at 7pm and the feast to begin. 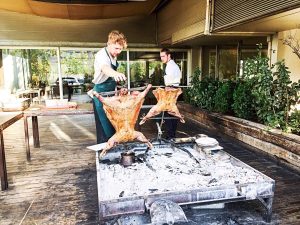 Borago offers two options for dinner – you can choose from six or 16 courses. Of course, we wouldn’t live up to being Greedy Girl and gluttonous husband if we only took six. If you’re looking for a wine list, you’re out of luck.

We didn’t see anyone choosing their own wines the whole night but the restaurant also offers a wine pairing to accompany the various creations. For 16 courses, we were given eight wines. Sorted.

The room starts off with lots of natural light flooding through the windows but, as you’d expect, things very quickly get dark and moody. There is a huge number of staff on hand, both in the kitchen (separated from the dining room by a glass wall) and on the floor. While a number came up to introduce themselves, we were looked after by pretty much the entire team it seemed – including several dishes delivered by chefs.

While Greedy Girl contentedly sipped her Pisco Sour, gluttonous husband took the offer of a ‘spiced’ gin and tonic. The rosemary sprigs in the glass added a nice aroma as you drank it. 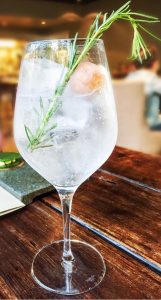 A spiced gin and tonic

And so, we settled in, to experience the menu called ‘Endemica’. First up was called ‘chilenito’ – a play on a traditional Chilean dessert but this was a savoury version featuring a horseradish cream, caviar and parsley. It’s presented alongside a pamphlet explaining the restaurant’s approach to ingredients. 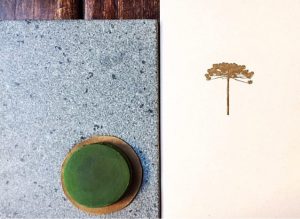 This was followed by, arguably, the dish of the night – a seafood-based biscuit (you can see on top). It’s described as ‘Picoroco’ which is a type of barnacle and topped with Chilean hazelnuts (the creamy semi-circles) and Pewen, also a type of native nut.

We snaffled the biscuit and then drank the broth made from the seafood, contained in a shell underneath. The texture was quite thick but the flavour was brilliant. 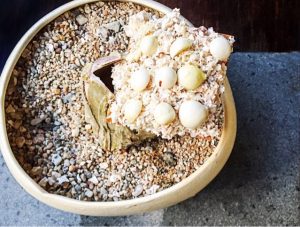 Next, we received some lovely little buns of bread with an intense butter made with yoghurt. We’d have been very happy to snaffle the lot, but we held some back and it came into its own to mop our first ‘main’ dish. 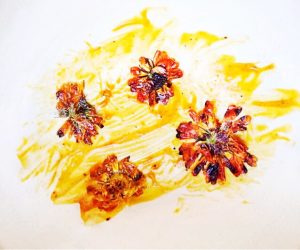 This was a vibrant, yet minimalist dish. The flowers were topped with a spoonful of an intense mushroom broth and we were instructed to help ourselves to the side dish also – morels cooked in a seaweed bladder. 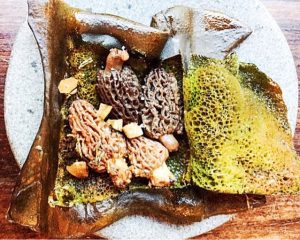 This was paired with a red wine – a 2015 Beso Negro El Libertino – mainly Petit Verdot, from the Colchagua Valley.

We then moved to ‘loco, lavender and almond tofu ice-cream’. 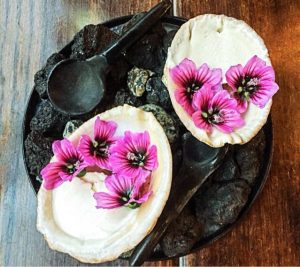 Two dishes in and both featured edible flowers. This was served with frozen spoons and you needed to dive under the surface to reveal abalone-like meat and an eggy custard. Gluttonous husband enjoyed the flowers more than Greedy Girl but it went down the hatch. The pairing here was a Chardonnay – a 2015 Clos Des Fous Dulcinea from the Malleco Valley.

It was time for our ‘rock sequence’. First up we had the dish featured at the top of this post – palo palo sea snail with wild fennel and sea stars. It was a delicate combination of flavours and quite enjoyable.

Next were rock vegetables (mainly spinach and seaweed) from Punta de Tralca, organised by layers. This is an area on Chile’s long coast, near Valparaiso. 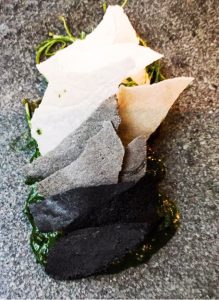 The texture of the vegetables was a bit challenging for Greedy Girl but she moved from the bottom to the top, tasting them with the various shards of a very light cracker. It was meant to represent the depths of the ocean – deep and dark at the bottom and light at the shore.

This was paired with a natural wine – a 2015 Ventisquero Tara chardonnay from the Atacama Valley. This was probably the only white we had on the evening that we’d be happy to drink with or without the food. As you’d expect from a natural wine it was reasonably cloudy but quite a pleasant drop.

Next was another dramatic looking dish – a river shrimp cake with rock salad and ‘kolof’ broth. Kolof is a local root and, as you can see, it creates a very deep-coloured result. 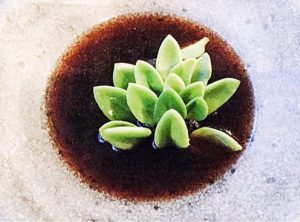 The beancurd ‘cake’ contained a delectable shrimp. Greedy Girl’s only quibble is that it was impossible to cut and she ate the whole piece at once. The salad was quite bitter but, taken as a whole, the dish worked. It was paired with a Sauvignon Blanc, a 2018 Laberinto, Cenizas de Barlovento from the Maule Valley.

It was time for some fish. This local fish was presented at the table in a ‘charcoal rock’, which was opened to reveal the cheeks. It was served with a salad of white rose leaves and ‘caldillo de congrio’, a sauce made from conger eel.

And very pretty it was too. Apart from the fish being a little salty, this was an excellent dish. The eel sauce wasn’t at all overpowering. It was paired with the last of the chardonnays – a 2015 Pandolfi Price ‘Los Patricios’ from the Itata Valley. This was a wine neither of us particularly enjoyed and we were happy to say goodbye to the whites. 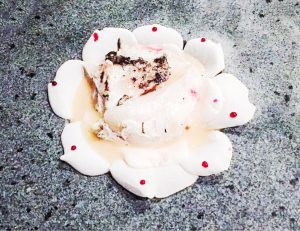 It was time for some meat, specifically duck. The whole duck was presented at the table, shown how it is cooked in beeswax. And here it is … 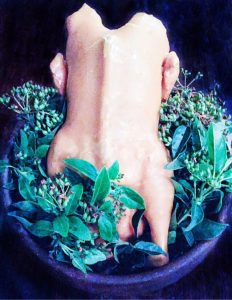 It’s rather a contrast from the dish that arrives … 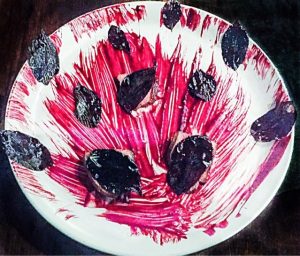 A new take on duck

Slices of the duck are hiding underneath the bitter red plum leaves, with a miso made of ‘murra’ (a Chilean berry) smeared over the plate.

The duck was sensational, but Greedy Girl didn’t think it was enhanced by the berries or leaves. Gluttonous husband particularly enjoyed the way those two elements went together but also ate the duck separately. It was paired with a red blend, a 2016 Vinedos de Alcohuaz, Grus de Alchohuaz from the Elqui Valley.

Up next was a further mushroom treat (apparently the chef loves mushrooms). It was a morel ‘candy’ served with a ‘lleuque’ vinegar from a Chilean plum tree. 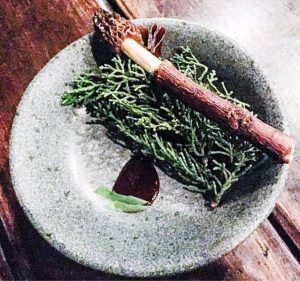 It was time for our final savoury course – the lamb we’d seen roasting outside at the beginning of the evening. This is served with a mille feuille of wild Patagonian apples and paired with another Beso Negro, this time a 2015 vintage dominated by the Carmenere grape (thought to have died out but re-discovered in Chile by a French expert – up till then the locals called it ‘little Merlot’).  Apologies for the darkness of the picture. 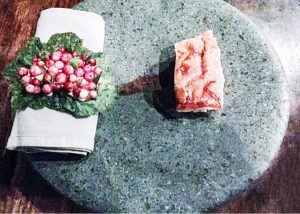 The lamb was sublime but the wild apples, presented on a bitter leaf were a step too far for Greedy Girl.

And so to desserts. First up was the whimsical ‘black sheep of the family’ and, it has to be said, this ice-cream and marshmallow confection kind of looks like a sheep. 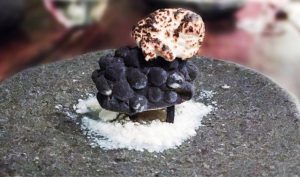 We then were offered an ice brulee of bitter plants from the Atacama desert, served with ‘rose of the year’  ice cream sandwich. 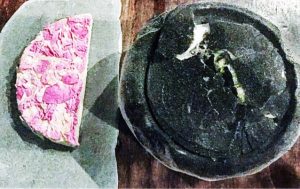 Rose of the year and ice brulee

The technique at play here is extraordinary but Greedy Girl, not particularly enjoying bitter flavours, sampled the ice brulee without particularly relishing it. The ice cream sandwich was quite dense. Having had a power of food we were both struggling.

This was paired with another natural wine, a very light 2012 Pinot Noir, Casa Roca Extra Brut Nature Millesime from the exotically-named Casablanca Valley.

For a final fun treat, we had ‘cold glacier’. This was a little meringue treat with a mild eucalyptus-type filling that filled your mouth with vapour, which blew out in dramatic clouds. 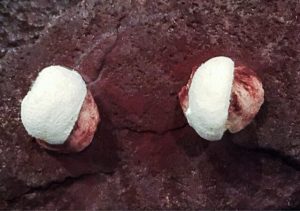 And we were done – or so we thought. A soft meringue dessert found its way to our table for us to share as an additional treat.

There was still more to come – the wait staff asked if we’d like to see the test kitchen upstairs. Off we went and chatted with the sous chef, a delightful fellow from Peru and we talked ingredients, seasonality, the creative process and eating around the world. For example, the black sheep dessert took two years to develop. There was no average time for dishes to be developed – some took years, others months, or occasionally days.

We commented how the foraging approach has taken off around the world, and that the food we ate reminded us of Melbourne’s Attica as well as the excellent Brae in country Victoria. Apparently the Borago team has been to Brae to cook in a co-production.

Borago has received a number of recent accolades, but it’s actually been in existence since 2006, when Guzman returned to Chile after a stint at the famed Mugaritz, about 10km from San Sebastian in the Basque region of Spain.

Santiago has a unique climate, ringed by such high mountains, and the produce from the city and, indeed the whole country is the star here. It’s certainly an interesting experience with some delightful dishes and some challenging ones, but one not to be missed if you’re making a visit to Santiago.